Shares of online lending marketplaces Lending Club Corp. (NYSE:LC) and OnDeck Capital Inc. (NYSE:ONDK) jumped by 15% and 20%, respectively, in August, reversing some year-to-date losses as investors warm back up to the industry.

Lending Club and OnDeck Capital have taken a beating since their respective IPOs, as investors have generally tempered their expectations for the profitability and sustainability of online marketplace lending.

Lending Club's 2016 performance has been particularly disastrous, as the company announced the departure of its CEO, Renaud Laplanche, in May as the result of a couple of mistakes. It began when a review found that $22 million worth of loans did not meet the specifications required by an investor, but the loans were sold to the investor anyway. This lead many to worry about potential governance and regulatory issues that may affect the company's growth and profitability. Laplanche also did not fully disclose his investment in an outside fund that invested in peer-to-peer loans. Laplanche was pushing for Lending Club to invest in the fund. 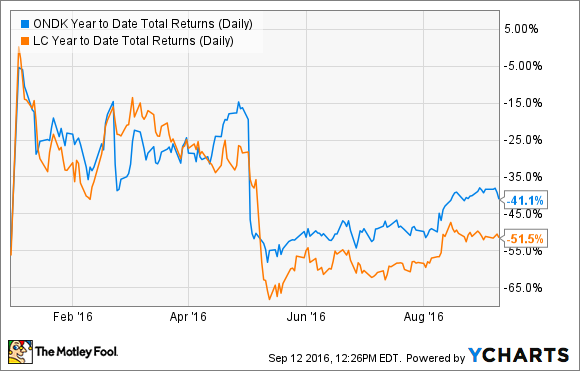 In August, the company's share prices began to recover when Lending Club reported earnings and simultaneously announced the departure of its CFO and the addition of a banking veteran to its board of directors.

For Lending Club, issue No. 1 is regaining the trust of banks, which previously made up a substantial share of institutional demand for its loans. Notably, banks bought more than 43% of its originations prior to the disclosure of problems on May 9, but purchases by banks declined to just 12% of its originations following disclosure in the second quarter. 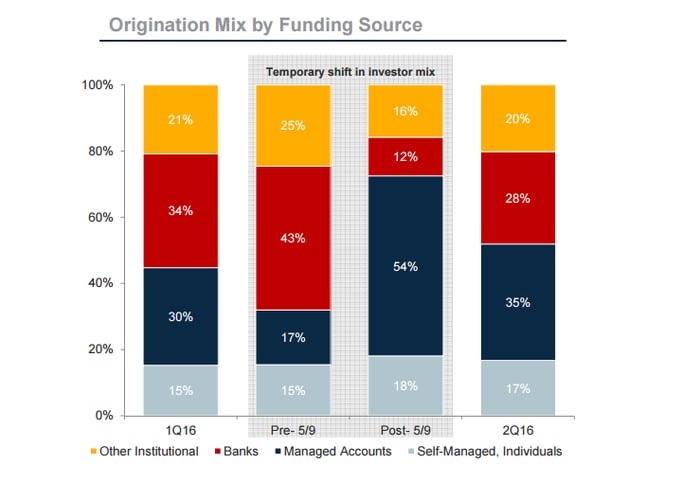 Shares of OnDeck Capital typically follow Lending Club, and vice versa. In August, OnDeck Capital showed that the problems plaguing its rivals had not affected its ability to originate new loans. Notably, OnDeck's originations grew 41% year over year compared to just 2% growth in originations at Lending Club. Unlike Lending Club, which seeks to originate loans solely to resell them to investors, OnDeck funded about 75% of its total loans from its own balance sheet capital at the end of the second quarter.

Investors rightfully have questions about the sustainability of online lending, particularly as it relates to whether online marketplaces can beat banks at their own game while maintaining high underwriting and compliance standards.

Though OnDeck has proven that it can and will continue to originate new loans and fund them with its own balance sheet, the industry would ultimately prefer to originate loans for immediate resale to outside investors, which results in an immediate gain and frees up capital for more originations. OnDeck Capital and Lending Club regained some trust with their shareholders in August, but they also need to recapture the confidence of investors who buy loans from their marketplaces.