Orders in General Electric's power segment have been sagging in recent quarters. Will its purchase of South Korea's Doosan Engineering turn the tide? General Electric (GE -2.08%) is having a power problem. Lately, orders in its power unit -- outside its Alstom Power acquisition -- have been slipping. But the company claims it has the remedy in the form of GE's latest purchase.

Doosan Engineering, a South Korean company, will sharply boost power segment revenue, according to Joe Mastrangelo, CEO of GE's gas power systems business. That would be fantastic news for investors -- if it's correct.

But organically -- that is, not including the company's big Alstom Power acquisition and other, smaller acquisitions and divestitures, as well as currency effects -- things looked even more dismal. Equipment orders were down 30% YOY, and down 27% in the power division, the company's largest by revenue.

This shrank the equipment backlog to $86 billion from $88 billion in Q1 and from its high of $89 billion in 2015. Organically, the services backlog also shrank, by 1% year over year. This performance stood in stark contrast to competitor Siemens (SIEGY -0.07%), which saw organic orders in its power and gas segment increase 86% year over year in its second quarter.

A couple of quarters of shrinking backlog doesn't necessarily mean the company has a major problem. A few big-ticket customers delaying completion of an order for a month could result in a temporary but ultimately meaningless quarterly backlog dip. And GE's overall backlog is so large that it can safely absorb such a drop. But it's important to know that management has a plan to reverse the trend.

That plan centers on acquisitions, and it seems to be working. In the last quarter, GE's Alstom acquisition received $4.5 billion in orders, with $2.9 billion of that amount coming from the power segment. This performance helped to push GE's overall backlog up to a record $320 billion, of which $233 billion of which is in services.

Since GE acquired Alstom in November 2015, Alstom's total backlog has increased by $1.6 billion. A big chunk of that figure was 30 orders for heat recovery steam generators (HRSG), which are parts of combined cycle power plants that provide up to about one-third of the power they generate. According to Mastrangelo, before the Alstom acquisition, GE typically sold only 14 HRSGs per year.  Rival Siemens has been heavily invested in the HRSG market for years.

GE's power unit is hoping to expand its HRSG business even further. So last month, it bought South Korean company Doosan's HRSG business for $250 million. In an interview with Reuters, Mastrangelo said the purchase will provide important manufacturing and engineering capacity. GE plans to leverage that capacity to help it manage the sales increases from the Alstom acquisition. But the big money from the acquisition may not be in manufacturing at all.

Growth in the right place

Not only will the Doosan purchase help GE fill those new HRSG equipment orders, but it will also give GE capacity to handle more HRSG service revenue and project management. Service contracts are even more profitable than equipment sales for GE.

While GE doesn't break out its profit margins on equipment sales versus services in its reporting, GE CEO Jeff Immelt revealed in a 2014 presentation that GE's industrial services had about a 30% profit margin. That's much higher than the company's overall operating margins, which were only 14.2% that year.

Indeed, if you look at the percentage of revenue each GE business segment derived from services in 2015, you'll find a strong correlation to that segment's profitability: 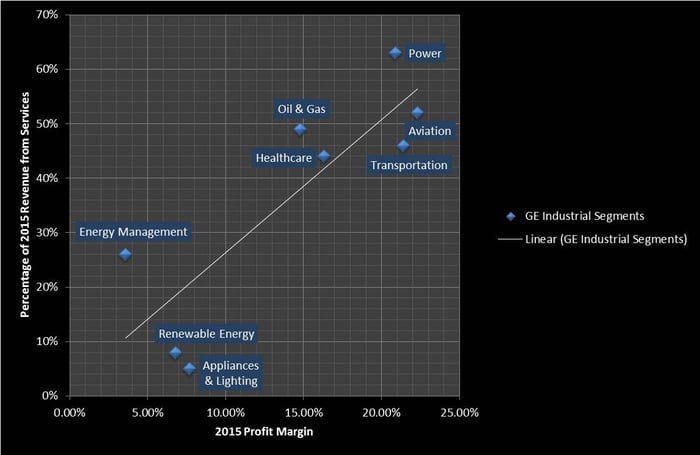 GE has even begun to service other manufacturers' equipment, including Siemens'.

Immelt said in GE's second-quarter earnings call that, based on the $7.5 billion in orders that GE's Alstom businesses had received in the first half of 2016, he expected them to yield $0.05 per share in profits for the year. Of course, that was before the Doosan purchase, which is slated to sharply increase capacity. "This allows us to double the output of the product into our business," Mastrangelo said.

This additional capacity -- which is already translating into sales -- should further offset any continuing weakness in GE's non-Alstom power sales and should calm investors who might be nervous about the shrinking backlog. That some of this capacity will be in lucrative services orders is even better for the company.

For a massive, diversified company like GE to reward investors, every one of its major business units needs to -- at the very least -- maintain its performance. That allows the outperforming businesses to lift the company's fortunes rather than offset losses elsewhere. This purchase will help to ensure that the power unit is a contributor to -- rather than a detractor from -- the company's overall success.

John Bromels has no position in any stocks mentioned. The Motley Fool owns shares of General Electric. We Fools may not all hold the same opinions, but we all believe that considering a diverse range of insights makes us better investors. The Motley Fool has a disclosure policy.