Indian information technology companies Infosys (NYSE:INFY) and Wipro (NYSE:WIT) are both down 20% from their most recent high-points this summer. This drop comes in spite of an economy in India that's growing by more than 7% this year. India's broader stock market has posted high-single-digit gains on the year, as measured by iShares India ETF (NYSEMKT:INDA). So what's happening at these emerging tech companies, and does their pullback in share price make them a good value? 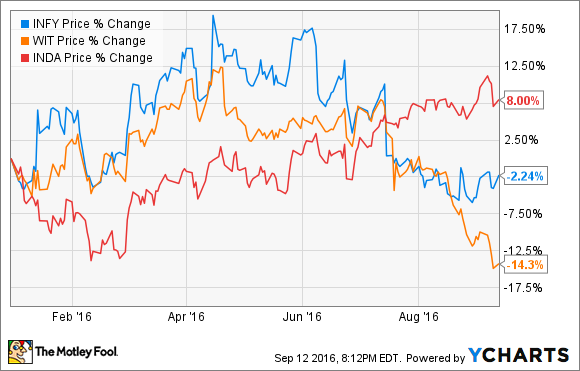 A tough quarter leads to a sell-off

Infosys and Wipro both offer a myriad of IT solutions, including consulting, application development, data analytics, and outsourcing. India's fast-growing economy, with an increasing number of educated tech professionals toting cheap labor rates, has helped the companies attract business from the developed world.

Shares have stumbled as of late, though. A new fiscal year started in the late spring, and the outlooks for business were a letdown for shareholders. Both companies recently released first-quarter earnings that confirmed the previously expressed outlooks for revenue growth.

For Infosys, first-quarter revenue increased 10.9% and profits increased 7.4% year over year. Profit lagged behind revenue growth because of increasing expenses and new revenue from clients coming in slower than anticipated.

The story was similar for Wipro, with revenue increasing 11.1% and profits sliding 6.7% compared with a year ago. Profits got eaten into, with cost of sales, marketing, and other admin expenses coming in higher than expected.

Despite the recent headwinds from increasing costs of doing business, managements at both companies are still confident of future growth. Why the optimistic outlook going forward?

Riding a wave of growth in India

Infosys management said it sees strong momentum in its "Renew-New" strategy. The company has been doing a good job to keep large client deals renewing at contract end, and it keeps adding new big clients with its IT solution offerings. During the last earnings release, Wipro management also stated that it expects "the trajectory of growth to build gradually over the course of the year" as recent progress in the business starts to pay off.

What exactly is driving the growth for these companies? They've been helped by a steadily growing Indian economy, as well as large corporations outsourcing IT as they look for ways to drive their own profits higher.

India's economy has been growing at a rate north of 7% for the past few years, in part helped by government spending aimed at bolstering infrastructure and supporting education and employment. This year has been no exception. Annual GDP, a measure of the value of all goods and services a country produces, is on pace to increase 7.6% this year, helped by government support for the emerging middle class, small business, and basic infrastructure expansion. Attracting foreign interest and investment has also been a goal.

These developments have helped create an educated workforce of IT professionals in India. Compared with rates in the developed world such as Western Europe and North America, wages for its workforce are very low. Corporations based in higher-cost developed countries are cutting costs and boosting profits by outsourcing technology development, consulting, and other tech services to India.

Infosys and Wipro have been greasing the skids of the outsourcing trend with new service offerings. The companies have gotten into consulting and system design work, software development, cloud computing services, and data analytics. More than just call centers and customer service roles, it's now possible for businesses to automate and manage critical technological systems overseas for less cost than keeping it in-house or in-country.

The trend is expected to continue, and even though the last quarter's growth was less than hoped for, the Indian IT businesses report that they continue to win new contracts and renew existing ones with the global search for profitability growth.

If the outsourcing of services and jobs isn't bothersome to you, Infosys and Wipro shares are worth a look. The recent pullback in prices may present a good opportunity to make a purchase.

Share prices fell with the disappointing profit numbers, but both companies expect to notch revenue expansion of more than 10% in the coming year. That should translate into renewed profit growth as near-term expenses incurred start to subside. With overall business still growing and operating in a fast-expanding economy, the recent 20%-plus drop in Infosys and Wipro's stock prices make them look like a good value to me.