According to the most recent data, short sellers ratcheted up their bet against crude oil and products pipeline MLP Valero Energy Partners (NYSE: VLP). Over the last two weeks of August, traders increased their short position by 59% so that 5% of the float is now sold short, which is double the average short interest in the company over the past few years. That is a pretty sizable bet for a company that has little earnings volatility and is controlled by Valero Energy (NYSE:VLO), which is the largest independent refining company in the world.

Unlike some other MLPs, Valero Energy Partners has zero direct exposure to commodity prices. Instead, 100% of its revenue is fee-based, which provides very stable cash flow. Last quarter, for example, distributable cash flow was $59 million, while the company generated $51.5 million and $53 million in the prior two quarters.

Meanwhile, the company only distributes about half of that cash to investors. As a result, its distribution coverage ratio was 2.04 times last quarter and averaged 2.02 times this year and 2.06 in 2015. For perspective, that is double the coverage of most MLPs, with energy midstream giant Energy Transfer Partners (NYSE: ETP), for example, having an average coverage ratio of 0.89 times this year and 0.99 in 2015.

Further, Valero Energy Partners maintains a strong balance sheet with a low leverage ratio of just 2.4 times debt-to-EBITDA as of the end of the first quarter and ample liquidity. It also doesn't have the growth capex requirements of most other MLPs with its 2016 capex budget a mere $19 million compared to Energy Transfer Partners' enormous $10 billion project backlog that is harder to fund given that it has a leverage ratio north of 6 times.

Despite that lack of organic growth, Valero Energy Partners has clear visibility for future growth due to continued drop down transactions with Valero. Just last month the company acquired the Meraux and Three River Terminal Service business for $325 million, which is expected to generate about $39 million in annual EBITDA. Valero has several additional assets to drop down to its MLP, including pipelines, storage facilities, rail cars, and marine assets, which combine to generate an estimated $1 billion of annual EBITDA.

That visible backlog of cash flowing assets drives Valero Energy Partners' view that it can deliver 25% annual distribution growth this year and next. Further, given its robust coverage ratio, it has ample room to increase its payout even if it does not complete as many transactions as expected.

What are short-sellers seeing?

If there is one potential problem with Valero Energy Partners' growth plan, it is the continued ability to fund future acquisitions given the volatility in the energy markets. Typically, the company uses a combination of cash on hand, availability under its credit facility, and common units to acquire assets from Valero. For example, in late March it announced the acquisition of the McKee Terminal Services Business for $240 million. It financed that deal with $139 million of borrowings under its revolving credit facility, $65 million of cash from excess cash flow, and $36 million in units. The concern going forward is that if its unit price were to plunge as short-sellers believe it could impact the company's ability to use them as a currency to fund drop-down transactions.

That said, it is very hard to see any reason for the units to plunge in value. Not only is its cash flow rock-solid, its leverage is low, and it has tremendous distribution coverage, but its units are not overvalued relative to its peers: 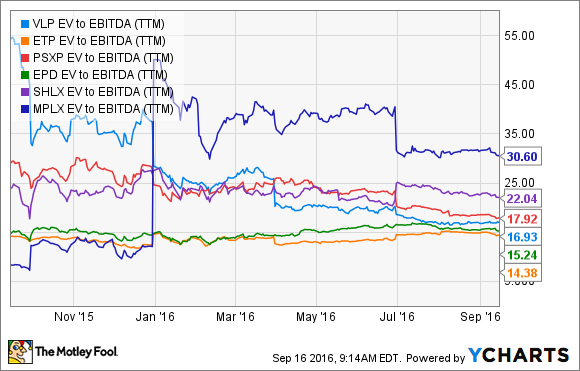 As that chart shows, it is actually undervalued compared to other refiner-led MLPs and is not trading at that much of a premium compared to behemoths like Energy Transfer Partners. Because of all that, I just don't see much of a short thesis here.

For reasons I do not quite grasp, short-sellers are increasingly betting that units of Valero Energy Partners are due for a fall. However, the numbers just don't back up that thesis. This is a rock-solid MLP with excellent financials and a clear path to delivering robust distribution growth over the next two years, which should drive its unit price higher, not lower.