The basic of investing in Magellan Midstream Partners can be summed up in these charts.

In a market where Wall Street says that it's hard to find a decent yield, it's a little surprising to see that shares of Magellan Midstream Partners (MMP 0.52%) have a distribution yield of 4.8%. Some short-term thinking people might point to rising interest rates as a reason to avoid this stock, but that seems to overlook Magellan's business model and its reputation. If you are looking for a high-yield stock, here are five charts that explain how Magellan operates and why you might want to consider it for your portfolio.

Stability built into the business

Being in the pipeline and logistics business alone makes it a much more stable business than other parts of the oil and gas industry because much of it operates on a toll-booth model that charges fixed rates for use of the pipeline rather than based on the price of the commodity it moves. This is especially true for Magellan because a vast majority of its operations is related to the movement of refined products like gasoline and diesel. The volume moved from refineries to distribution points have much more consistent volumes than crude oil or natural gas.

What is even more impressive is that a decent chunk of Magellan's refined pipeline business is in parts of the country that the Federal Energy Regulatory Committee has deemed a non-competitive region and has price regulations. This means that Magellan operates as a de facto monopoly in these regions and gets a regulated rate with a guaranteed rate of return.

Having these kinds of benefits are not unique to Magellan, but the company leverages them much better than many of its peers. Rather than trying to get some upside from commodity prices, the company locks in more than 85% of its revenue from fixed-fee contracts that have minimum volume commitments that ensure a steady stream of cash flow.

Another aspect that sets Magellan apart from the rest is the fact that management takes a much more conservative approach. While so many others have obsessively pursued growth and have let their balance sheets deteriorate, Magellan has maintained a pristine balance sheet with its net debt to EBITDA has remained below four times since its IPO in 2004.

This may not sound like a great number in a vacuum since this might be considered high in many other industries. When compared to other master limited partnerships, this seems like an almost puritanical approach to debt and leverage.

Knowing that management has more of an aversion to debt than others means that the company is much less likely to get into debt troubles if the market for energy infrastructure were to get any worse. It also means that it is spending less on servicing that debt and can return more to shareholders in the long run.

Just because Magellan's approach is more conservative than others doesn't necessarily mean that the company's growth prospects are dim. Between now and 2018, Magellan expects to put $1.3 billion worth of new assets into service, with many of those projects getting completed either at the end of this year or in the first half of 2017. 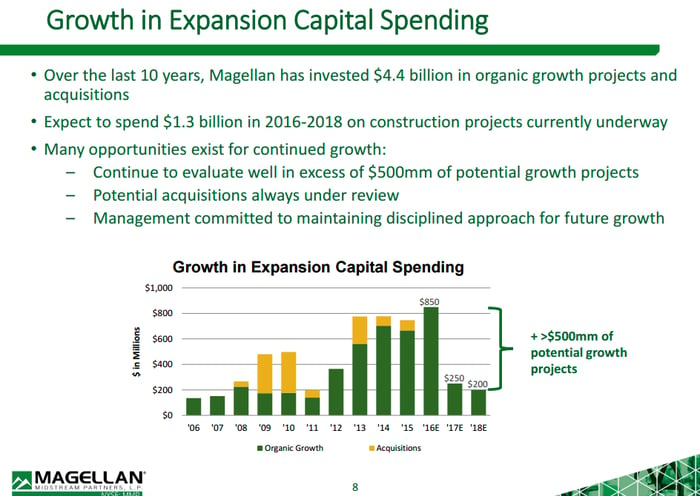 Beyond a year or two, the company doesn't typically provide much guidance, but recently CEO Michael Mears has been chatting up one of its current investments that has the potential for bigger investments in the future. Its new storage and export terminal in the Houston Ship Channel is a $350 million project, but there is potential to spend another $1 billion on expansion that could fuel growth for several years.

What really matters for investors, though, is that Magellan's management can take its conservative business model and turn it into decent returns for investors. So far, the company has done a very good job of that. Ever since its IPO, Magellan has raised its dividend every quarter like clockwork. 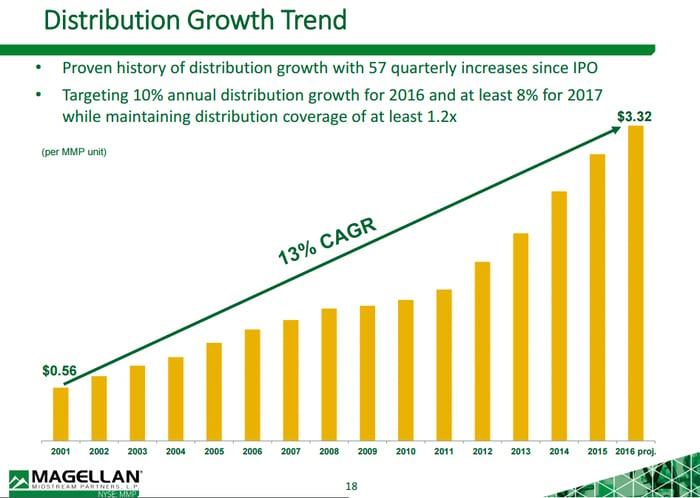 That high rate of return from distributions has helped the company's stock wildly outpace the S&P 500 on a total return basis. 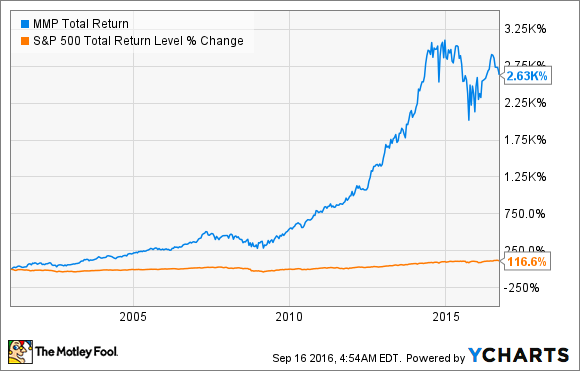 For an investment in what is considered a rather conservative, slow-growing industry, it's hard to find one that has generated better returns.

Magellan Midstream Partners is a pretty easy business to understand. Once you strip away the perception that it's like other oil and gas investments, you can see that it's a stable business with a management team that does right by its investors. If you want to keep track of management's progress, be mindful of the company's distribution coverage ratio, its debt-to-EBITDA ratio, and announcement of new projects. Keeping levels at the same level as today should ensure strong long-term returns well into the future.

Tyler Crowe owns shares of Magellan Midstream Partners. You can follow him at Fool.com or on Twitter @TylerCroweFool.