Please ensure Javascript is enabled for purposes of website accessibility
Log In Help Join The Motley Fool
Free Article Join Over 1 Million Premium Members And Get More In-Depth Stock Guidance and Research
By Neha Chamaria – Sep 17, 2016 at 8:20AM

Why is PotashCorp CEO Jochen Tilk optimistic despite the depressed market conditions?

It's official: PotashCorp (POT) will merge with Agrium (NYSE: AGU), subject to regulatory approvals, by mid-2017 to create the world's largest traded fertilizer company. Sounds like a good deal, except I'm unsure about the premise behind the merger. PotashCorp's biggest challenge -- weak potash prices -- could remain so even after the deal.

In fact, as much as the merger excites investors, they should be increasingly concerned about the conditions in the fertilizer industry and, more importantly, PotashCorp's efforts to tackle the headwinds as that'll hold the key to its turnaround. On that note, here are three important quotes from PotashCorp CEO Jochen Tilk from the company's recent earnings call that should provide you with some valuable insight.

Why is PotashCorp optimistic about 2017?

Falling demand from key international markets like China and India can be largely blamed for the recent plunge in potash prices. Both nations delayed potash import contracts this year by several months, sending jitters across the industry. Ironically, Tilk sees a silver lining in the delay:

Experience is telling us that a rebound in demand is the norm following a year of later than normal contract settlements and the late purchasing. We have also looked carefully at the specific factors in each key region and believe that they also support a recovering 2017.

PotashCorp expects late contracts to shift demand into next year, which should loosen up inventory and boost potash prices. Currently, North American potash producers, including PotashCorp, Agrium, and Mosaic (MOS 5.38%), hold high levels on inventory, as evidenced by the green bars in this chart: 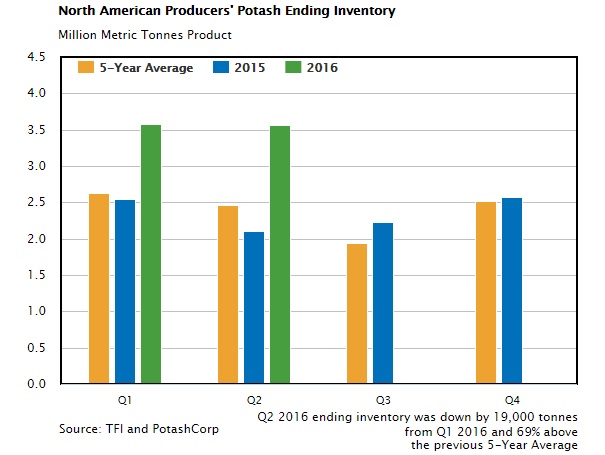 Inventory in the second quarter was almost 69% above the five-year average. Things could get tougher if new supply continues to hit the market, though PotashCorp isn't too worried about the supply side.

Tilk doesn't consider increased global potash capacity to be an immediate concern. In his words:

When we look at the supply side in potash, outside of our own expansion at Rocanville, we see only modestly higher global operation capability next year. This incremental capability comes primarily from other existing producers in North America as well as some ramp up tonnes from the K+S Legacy project, although recent announcements may delay the ramp up.

Near-term expansion delays might be true, but the longer-term story remains the same: Several potash projects are under way worldwide, posing a threat to the already skewed demand and supply situation in the industry. Investors may even recall how PotashCorp's (failed) $8.8 billion bid to acquire K+S was largely seen as an attempt to gain control over K+S's greenfield Legacy project, which is expected to pump more potash into the markets in the near future.

While acquiring K+S might've given PotashCorp greater bargaining power in the potash market, the same can't be said about its merger with Agrium. The key to PotashCorp's bottom-line growth will still depend largely on its ability to cut costs. There's some hope on that front.

How is PotashCorp handling the downturn?

PotashCorp has resorted to extreme measures to keep its head above water during these difficult times. As Tilk pointed out in the conference call:

We've demonstrated our strategic approach over the past twelve months by taking meaningful steps to align our operating capability with expected market conditions and to reduce costs.

From suspending operations to shifting production to low-cost plants, PotashCorp is working hard to cut costs. 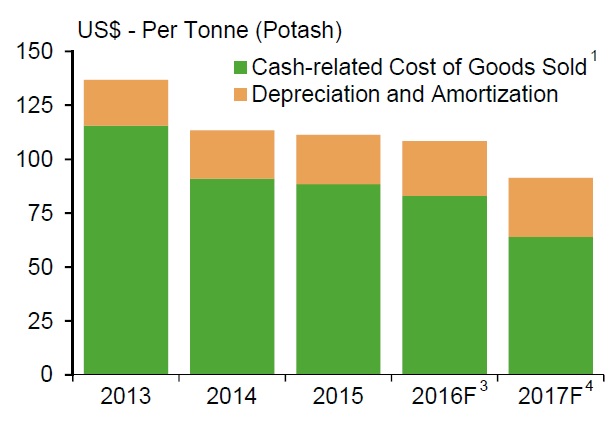 As the projections for 2017 above indicate, PotashCorp's production costs should head even lower as it ramps up its Rocanville mine to full capacity next year. Rocanville -- PotashCorp's largest mine -- is expected to churn out potash at a cost of $45-$50 per tonne at full capacity -- a number that looks unbelievably good when you realize that PotashCorp's cost of goods sold was a little over $100 per tonne of potash during the first half of this year. If PotashCorp can hit those cost targets, Rocanville could prove its trump card during these depressed times even as the company awaits a recovery in prices.

Neha Chamaria has no position in any stocks mentioned. The Motley Fool has no position in any of the stocks mentioned. Try any of our Foolish newsletter services free for 30 days. We Fools may not all hold the same opinions, but we all believe that considering a diverse range of insights makes us better investors. The Motley Fool has a disclosure policy.