Please ensure Javascript is enabled for purposes of website accessibility
Log In Help Join The Motley Fool
Free Article Join Over 1 Million Premium Members And Get More In-Depth Stock Guidance and Research
By Beth McKenna - Sep 17, 2016 at 10:04AM

Up to 50 times faster than conventional SLS 3D printing tech and capable of being automated, Figure 4 will be a key component of 3D Systems' push into manufacturing.

3D Systems (DDD 7.14%) kicked off the International Manufacturing Trade Show (IMTS) in Chicago this week with a presentation outlining how it is positioning itself to capitalize as 3D printing shifts from being a primarily prototyping technology to one that's used in a wider range of manufacturing applications.

A key component of 3D Systems' strategy is its new technology, Figure 4, which the company claims is up to 50 times faster than conventional stereolithography (SLA) 3D printing systems. Figure 4 is a robotic, modular, SLA 3D printing system designed for the production of plastic parts.

A 3D-printed object rising from a vat of photopolymer (a liquid polymer that solidifies upon exposure to  light). Image source: 3D Systems.

Figure 4, unveiled earlier this year and recently updated, gets its name from the Fig. 4 illustration in 3D Systems founder Chuck Hull's original patent filing for SLA in 1984.

SLA is a photopolymerization 3D printing technology, meaning it uses light to harden polymers (a materials class that includes plastics). Rival Stratasys (SSYS 13.49%) also has a well-established photopolymerization technology -- its proprietary PolyJet -- but doesn't offer a super-fast process, like Figure 4.

Figure 4 sports four key features that 3D Systems believes will enable it to succeed as a manufacturing technology that's a "viable and intelligent alternative to injection molding":

Speed, materials capabilities, automation, in-line inspection, and surface quality are widely considered to be the main hurdles holding 3D printing back from making greater inroads into manufacturing applications beyond very short-run ones.

3D Systems has housed this technology in discrete modules, enabling it to be placed into automated assembly lines, and integrated with secondary processes, including material recovery, washing, curing, and various finishing procedures.

3D Systems claims that it has made materials breakthroughs with Figure 4 tech, primarily stemming from the fact that a greatly accelerated photopolymerization process means that liquid polymers are not sitting in vats for nearly as long as they do in the standard SLA process. This opens up the possibilities of using material chemistries that don't have to be nearly as stable.

How does Figure 4 stack up to the competition?

HP claims its 3D printer is up to 10 times faster than printers powered by fused deposition modeling (FDM) and selective laser sintering (SLS). Carbon couldn't provide relative speed claims regarding its M1 because it uses proprietary resins. However, we know CLIP was about 25 to 100 times faster than PolyJet, SLS, and SLA to produce the same object when tested last year. Here are the results of third-party tests commissioned by Carbon, which involved producing the same 51-millimeter-diameter complex part made of an elastomeric material: 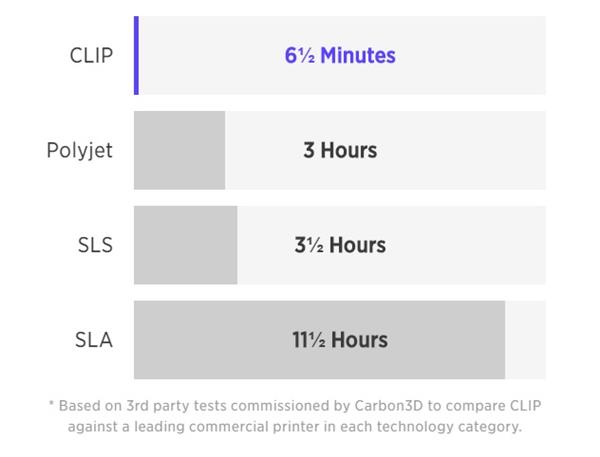 CLIP's exact relative speed advantages in the above comparison are:

3D Systems claims that Figure 4 is "up to 50 times" faster than conventional SLA. The "up to" makes true comparisons impossible. We'll be liberal and use the maximum rate. This would mean that Figure 4 would be able to produce that same comparison object in 13.8 minutes (SLA's time/50). This makes Figure 4 very speedy, but only about half as fast as CLIP.

Now let's bring HP into the mix. HP uses FDM and SLS as its speed benchmarks. We can assume that the higher end of HP's "up to 10 times faster" claim refers to SLS, the slower of the two benchmark techs. Again, we'll be generous and use the maximum rate This would mean that HP's tech would be able to produce that same object in 21 minutes (SLS's time/10). This makes HP's tech slower than Figure 4 and slower yet than CLIP.

The caveats are considerable. We only compared the speeds at which the various new techs can likely produce one specific object. Relative speeds will vary depending upon factors such as part complexity and material. Moreover, factors other than speed matter considerably for companies when choosing a 3D printer.

The proof will be in the partnerships

3D Systems' Figure 4 appears to be an impressive, speedy new technology that could enable the company to capitalize as 3D printing makes inroads into a wider range of manufacturing applications. While Figure 4 doesn't appear to have a speed advantage over Carbon's CLIP, it does sport other features -- ability to be incorporated into an automated production process and in-line parts inspection capabilities -- that appear to be unique among the super-fast 3D printing techs at this point.

The proof will be in the pudding: Investors should watch to see if any notable companies partner with 3D Systems on its Figure 4 initiative.

1 Stock for Investing in 3D Printing