It's actually a lot closer than you might think. 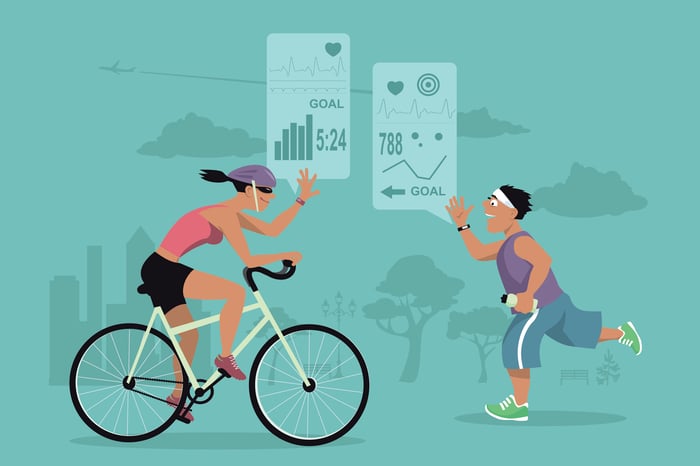 These days, it's hard to go out in public and not notice someone wearing some type of fitness device. Both Fitbit (FIT) and Garmin (GRMN 1.37%) are at the forefront of the wearable fitness movement, but which is the better buy at today's prices?

There's no definitive way to answer that question, but there are a number of different lenses to evaluate each company's stock. Below are three of the most important.

While having cash in the bank might not sound very exciting, it can make a huge difference in the long run. If tough times -- either on the macro or micro level -- hit, companies that have lots of cash on hand have options. They can outspend their rivals, buy back stock at bargain prices, or even acquire competitors.

Those who don't have cash -- and do have lots of debt -- are in a completely different boat. They must narrow their focus, cut back on reinvestment in their business, and do everything they can just to make ends meet.

Knowing that, here's how these two stack up.

It's important to note that Garmin is currently valued at about two-and-a-half times the market cap of Fitbit. Knowing that, these two companies are essentially equals in terms of their financial fortitude. Both have regular cash streams, a sizable cash cushion, and absolutely no debt to speak of.

In my eight years as an investor, no variable has played a larger role in the success (or failure) of my investments than the sustainable competitive advantages of the underlying companies. This is sometimes called a "moat." If your company doesn't have one, then competition will eventually eat away at any returns that once seemed possible.

Since both of these companies are actively in the wearable fitness category, this is particularly important. Garmin, as many of us know, got its start in GPS devices popular in the days before Google maps were available on smartphones.

Since then, it has branched out into wearable tech. That division (fitness) accounted for 24% of the company's 2015 revenue, and 25% of operating income. The other divisions -- outdoor, marine, auto, and aviation -- contributed the other three-quarters. And given their higher margins, Garmin enjoys a stable moat in these non-fitness divisions.

Fitbit, on the other hand, has just one category, but it absolutely dominates it. IDC estimates that Fitbit has the largest market share of wearable devices at 24.5%. More importantly, NPD estimates that 79% of activity tracking market is owned by Fitbit. That's a huge first-mover advantage.

But since Garmin can call on other divisions to pour in more high-margin sales, I'm calling this a tie as well.

Finally, we have valuation. While there's no foolproof way to tell how expensive a stock is, there are a number of different metrics that offer data points. When added together, they can offer a more complete picture of just how much a stock costs.

Based solely on earnings and free cash flow, Fitbit and Garmin look equally priced, with a slight nod to Garmin being cheaper. But when we look at the growth potential that analysts see in the future (according to the PEG ratio), Fitbit appears to be 80% cheaper than Garmin. That makes this decision an easy one.

Clearly, there's more to Garmin than just fitness tracking, and that adds a level of safety that investors won't get with Fitbit. Given the warm reviews to Fitbit's new Flex 2 and Charge 2, there's a lot of excitement behind the company. If sales can match that excitement, investors will be rewarded for their faith in management.