The long-awaited oil market recovery hinges on two factors: rising demand and declining supply. While both had been heading in the right direction over the past year, recent reports from the International Energy Agency (IEA) and OPEC suggest that there could trouble on the horizon. That could cause the oil market to remain unbalanced for much longer than the industry had hoped, forestalling the recovery that investors are banking on to drive oil stocks higher.

Tapping the brakes on demand

Driving this tepid outlook is uncertainty across the global economy. Demand growth in places like China and India is slowing as the stimulus from cheap oil is no longer accelerating demand. Meanwhile, demand in Europe remains lukewarm due to the fallout of the Brexit vote as well as sluggishness across several EU economies.

Additionally, demand for gasoline in the U.S. is not as high as anticipated, causing gasoline supplies to pile up in storage. That is leading refiner Phillips 66 (PSX -0.07%) to project that the sector will process less crude in the second half of this year. That is certainly what it plans to do. After running its refineries at 100% capacity last quarter, it plans to operate around mid-90% in the third quarter due to sinking margins. Those shrinking margins due to excess gasoline supplies caused Phillips 66's refining profits to plunge 75% last quarter.

Hitting the accelerator on supply

Making matters worse is the outlook for supply. OPEC recently raised its 2016 and 2017 oil supply forecasts for non-member countries. It now sees output this year averaging 180,000 barrels per day above its prior forecast. Meanwhile, it sees production rising 200,000 barrels per day next year, against its previous view of a 150,000-barrel-a-day decline.

One of the key drivers of this view was the long-delayed start-up of the massive Kashagan oilfield in Kazakstan. Meanwhile, production in the U. S. continues to be very resilient due to efficiency gains, cost reductions, and productivity improvements. Furthermore, the rebound in crude prices to the mid-$40s is causing several U.S. oil companies to put rigs back to work to boost production heading into 2017. In fact, according to Baker Hughes' latest rig report, producers added rigs for the 10th time in 11 weeks: 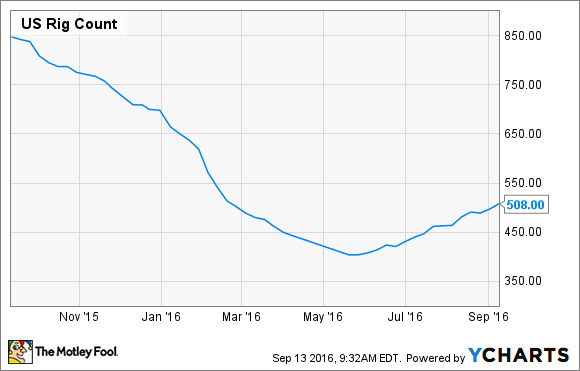 Permian Basin driller Pioneer Natural Resources (PXD 1.43%) is one of the companies adding rigs after it boosted its 2016 spending plan by $100 million. The company plans to add one rig this month and two more in both October and November. These additional rigs will have a modest impact on its production in 2016, though it does expect to boost output by 13% versus its initial outlook for 10% growth. Furthermore, Pioneer plans to increase production by 13% to 17% next year with its long-term forecast to deliver 15% annual production growth through 2020.

Likewise, fellow shale drillers Devon Energy (DVN 0.19%) and EOG Resources (EOG -1.28%) are making plans to boost production next year. Devon Energy already increased its 2016 budget by $200 million to add rigs geared toward ramping production early next year. Additionally, Devon sold $3.2 billion in assets this year and plans to use a third of that cash to boost spending in the future. Meanwhile, EOG Resources is returning to growth mode next year after two straight years of holding the line on production. EOG's current outlook is to grow production by 10% annually through 2020 at $50 oil with the growth rate accelerating to 20% if oil averages $60 a barrel.

Oil producers in the U.S. are returning to growth mode despite the fact that the oil market remains on shaky ground because the fundamentals of supply and demand are not in balance. With demand growth moderating and supply declines starting to taper off, it could cause fundamentals to remain out of balance for longer than producers had hoped and keep a lid on oil prices. That could thwart the oil market rebound that producers are banking on in 2017, which could make it another tough year for oil stocks.