The Motley Fool gets an inside look at Tesla's factory in Fremont, California, where the electric-car maker aims to ramp up annual production from an estimated 79,000 vehicles this year to 500,000 vehicles in 2018. Tesla factory photos by Levi Sim, for The Motley Fool's use.

If you're looking for a glimpse into the bread and butter of Tesla Motors' (TSLA -0.34%) business, a tour of the electric-car maker's 5.3 million square-foot factory will do the trick. With the majority of the company's revenue coming from new vehicle sales, the automaker's Fremont, California, factory plays a critical role in whether Tesla can live up to its aggressive growth targets.

With that in mind, here are the highlights of my Aug. 31 visit to Tesla's factory at one of the most critical times in the company's 13-year history.

It had been about a year-and-a-half since I had seen Tesla's Fremont factory, so I expected significant progress. Indeed, given that Tesla hadn't yet started installing its second body assembly line for its late 2015-launched Model X when I visited last time, I knew production capacity must have jumped drastically.

I wasn't let down. Factory changes in the past year-and-a-half revealed a rapidly growing company. The upgrade was most evident in the scale of the new second body assembly line, where an army of recent red robot-arm recruits moved around to perform up to five tasks each. A whopping 580 robots on the body line are building Tesla's Model X SUV, up from the 160 robot arms driving Model S body assembly.

Thanks to Tesla's big investment in factory tooling, production capacity has jumped. In early 2015, Tesla's factory was tooled for production capacity of about 50,000 vehicles per year. Tesla's factory today, however, is capable of producing more than 100,000 vehicles annually. Indeed, during my recent visit, Tesla confirmed that the company was producing 2,000 vehicles per week, suggesting that its production equipment is operating full steam -- at least full steam for what it's currently set up to handle.

But what was perhaps even more striking is how often I saw a certain new Tesla vehicle on the production lines around the factory.

Recently, Tesla has faced some challenges with production -- particularly when it comes to its plan to rapidly ramp up production of its Model X SUV. Production challenges with Tesla's complex, Falcon-Winged Model X have meant the company's quarterly deliveries have fallen short of its own guidance for two quarters in a row.

But my third-quarter factory visit didn't show signs of Model X production challenges. On the contrary, the company's general assembly line, which is shared by the Model S and Model X, and doesn't batch vehicle models in any particular order, easily had just as many Model X vehicles on the line as it did Model S.

While this only represents a small sample of reality and shouldn't be relied on as an extrapolation of the mix of vehicles coming out of the factory during the quarter, the observation does align with what management has been saying about expectations for the second half of the year.

"I think in sort of a nutshell, the way to think about Tesla right now is that we are right around 2,000 cars a week," Tesla CEO Elon Musk said during the second-quarter earnings call. "And we're trying to balance the mix to be roughly half X and S."

One huge change to Tesla's factory since my visit early last year is how full the building is. Before Tesla started building its second body assembly line, you could seemingly drive a golf cart around near-empty parts of the factory for minutes at a time. Now the company is using all of the factory's space, albeit much of it simply for temporary warehousing. 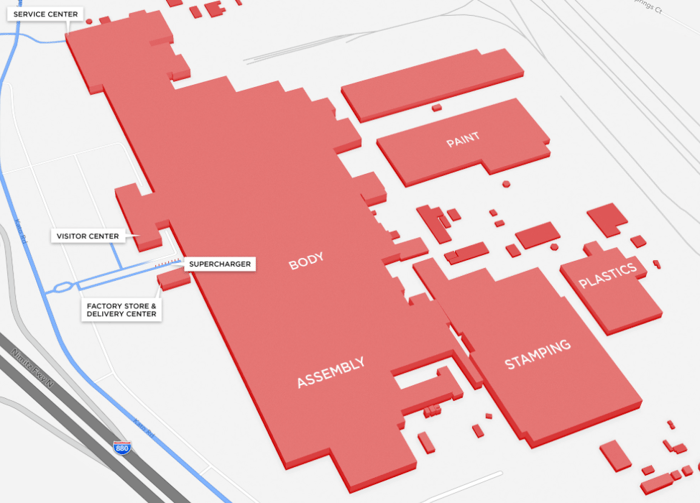 But the vast amounts of warehousing in the factory highlighted a key missing component: square footage dedicated to its late 2017-slated, lower-cost, higher-volume Model 3, which Tesla anticipates will help take the company from an annual production rate of 100,000 to 500,000 by 2018, thanks to a larger market at the vehicle's $35,000 price point (about half the starting price of its more expensive Model S and X vehicles).

To be fair, Tesla has already made some preparations for the Model 3. Its new paint shop, which Tesla doesn't show the public, is capable of painting up to 10,000 vehicles per week. Tesla's stamping center for Model 3 is also already on the line, currently stamping pieces for Model S and X but ready to contribute to Model 3 production next year. Furthermore, Tesla's unique just-in-time construction of its Sparks, Nevada-based Gigafactory, which will be purposed to build batteries for Tesla's growing vehicle and energy storage sales, is also on target to support the beginning of Model 3 production in 2017.

Tesla's new Italian-made press stamps body pieces for Model S and X today but is ready to be a workhorse for Model 3. Image source: Tesla Motors.

However, there was no sign of construction of the new Model 3 body and general assembly centers that Tesla says it will begin before the end of the year.

But the lack of Model 3 tooling at Tesla's Fremont factory wasn't necessarily a surprise. Tesla said in a recent SEC filing that it is currently planning to raise additional funds by the end of the year through an equity or debt offering to be used "primarily for tooling, production equipment and construction of Tesla's Model 3 production lines, equipment to support cell production at Tesla's Gigafactory, as well as new Tesla retail locations, service centers and Supercharger locations."

In other words, Tesla won't be making any significant progress on tooling and production equipment for Model 3 until it raises more money later this year.

Overall, a tour of Tesla's car factory highlighted both the company's fast rate of growth and its huge challenge to prepare for Model 3. Tesla's ability to grow its business in recent years undoubtedly deserves some recognition. Before it launched Model S in 2012, the company was delivering only about 100 of its sporty Roadster vehicles per quarter. And just four years later, Tesla has achieved an annualized production rate of 100,000 vehicles. But increasing annual production from 100,000 to 500,000 vehicles in about two years' time will likely be accompanied by a whole new set of challenges.