The software giant launches one last phone as it prepares to sell off its feature phone business. 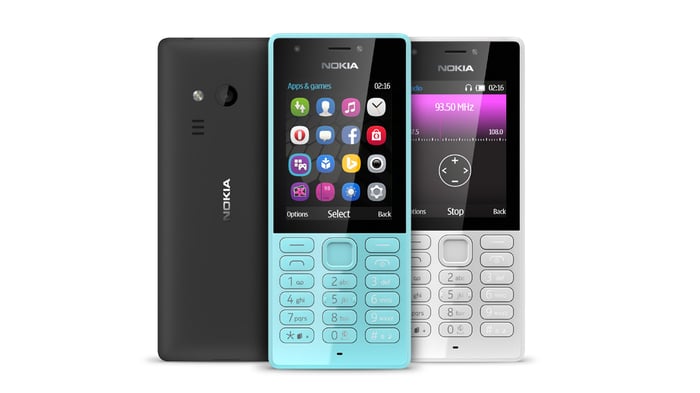 Software giant Microsoft (MSFT 0.13%) has unveiled the new Nokia 216, a low-end feature phone with a 2.4-inch QVGA display and 0.3 megapixel cameras (front and rear). The device will run the Series 30 operating system and can download apps and games from the Opera Mobile Store.

There is expandable memory and a replaceable battery, and the Nokia 216 will be priced at approximately $37 and will target emerging markets.

The announcement is a little curious, since Microsoft said it would sell its feature phone operations in May. The company is unloading the segment to Foxconn subsidiary FIH Mobile for $350 million, recouping a tiny fraction of what it paid. Most of the initial 2013 blockbuster deal's value has already evaporated in a massive writedown from last year.

This device was already in the pipeline and Microsoft is merely launching it prior to the closing of the sale to FIH Mobile, which is expected to occur in the second half of this year. Once upon a time, Microsoft dreamt of wooing feature phone users with Microsoft services, but those aspirations have fizzled out.

Evan Niu, CFA has no position in any stocks mentioned. The Motley Fool owns shares of Microsoft. We Fools may not all hold the same opinions, but we all believe that considering a diverse range of insights makes us better investors. The Motley Fool has a disclosure policy.