A strangle option strategy involves the simultaneous purchase or sale of call and put options in the same stock, at different strike prices but with the same expiration date. A long strangle is designed to profit from a big price movement, while a short strangle is a bet that the price won't move much.

In a long strangle, your losses are capped at the cost of the options contracts, while your profit potential is unlimited and depends on just how far the stock moves.

There are many degrees of aggressiveness when it comes to long strangles. On one end of the spectrum, you can choose to buy your call and put options just out of the money, which will cost you a little more to set up but your odds of success are relatively high. On the other hand, you can choose to buy options that are far out of the money -- the trade will be cheap to set up and the probability of success isn't high, but you can make some pretty big returns if you're right.

Let's say that I feel that Apple (NASDAQ: AAPL) will have a pretty big move over the next month as the company's new products come to the market. Apple is currently trading for approximately $115, so I could buy a $110 put option and a $120 call option, both expiring in October 2016.

As I write this, about one month from that expiration date, these options trade for $1.17 and $1.20, respectively. So, the trade costs a total of $2.37 per share to initiate. Based on this cost and my strike prices, this implies a breakeven point of $107.63 on the low end and $122.37 on the high end. If Apple ends up outside of this range at expiration, I will have made a profit. And, in the worst-case scenario, if Apple closes within the $110 to $120 range, both contracts will expire worthless and I'll lose my entire investment.

To illustrate this, consider some potential closing prices for Apple at October expiration, and the profit or loss of the trade (per share):

And for those who prefer visuals: 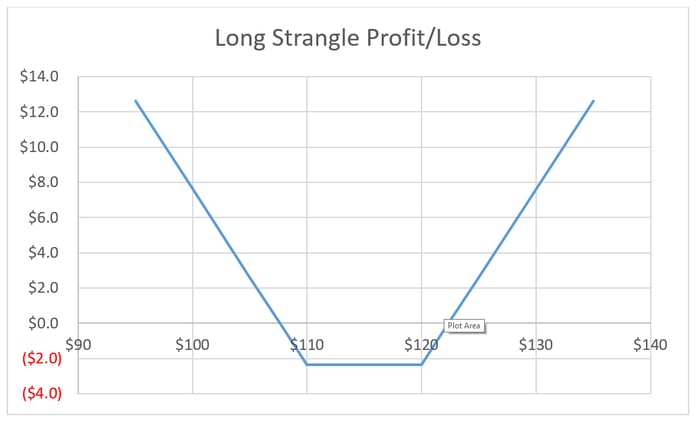 On the other hand, a short strangle involves simultaneously selling out-of-the-money calls and puts on the same stock with the same expiration. By doing so, you're betting on the exact opposite result that a long strangle is intended to achieve: You want the stock to stay right where it is.

Continuing my Apple example, let's say that you think Apple will be stuck close to $115 for the next month, so instead of buying, you decide to sell the same two options contracts I mentioned earlier, netting you $2.37 in premium income.

In this case, the premium you collect is your maximum profit. If Apple is between $110 and $120 at expiration, you keep the whole premium and the options you sold expire worthless. Your breakeven points are the same for the long strangle: $107.63 and $122.37. And, if Apple is lower or higher than those prices at expiration, you will have losses, which can be pretty large if the stock does make a big move. 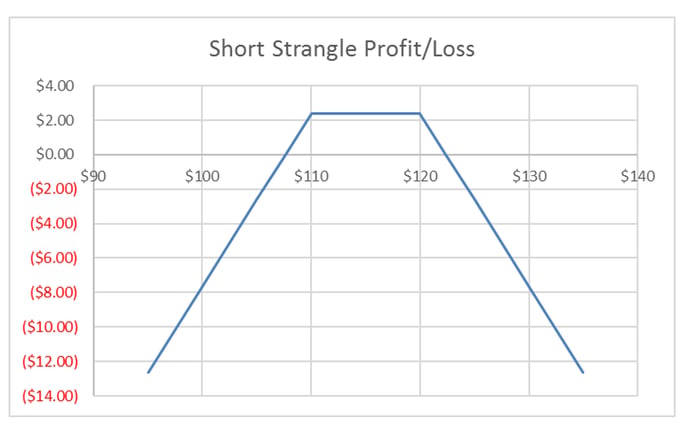 To sum it up, here's what you need to know about strangle option strategies:

A long strangle involves simultaneously buying out-of-the-money call and put options. If the stock price moves further than your breakeven point, you can make unlimited profit on the trade. If it doesn't, the most you can possibly lose is the money you paid for the options.

A short strangle involves simultaneously selling out-of-the-money call and put options. If the stock price stays in the range created by the difference in your strike prices, you earn your maximum profit, equal to the options premium you collected. If it moves outside of the range, your profits drop, and if it moves beyond your breakeven points, you start losing money. Losses with short strangles are unlimited, so proceed with extreme caution.

What Is a Strangle Option? @themotleyfool #stocks Next Article
Current