Traders bid up shares on the news that the company's stock will be added to an index.

Shareholders of Amphastar Pharmaceuticals (AMPH 3.26%), a specialty pharmaceutical company focused on generic and proprietary injectable and inhalation products, are seeing green on Tuesday. The company's stock is up by 12% as of 12:30 p.m. EDT after news broke that it will be joining the S&P Smallcap 600 Index on Wednesday.

S&P announced Tuesday that Cirrus Logic, a semiconductor company, is being removed from the S&P 600 Smallcap index and will be added to the S&P Midcap 400 Index instead. That move has created an opening in the small-cap index fund and S&P has decide to add Amphastar.

When a company is added to an index all owners of funds that follow the index are simultaneously forced to buy the company's shares in order to remain up to date. Often times that creates enough short-term demand for the stock that shares rally, which appears to be happening.

Amphastar's stock has been on a terrific run since the start of the year. Including Tuesday's move, shares are up nearly 50% since Jan. 1, which blows past the returns of the healthcare sector in general as measured by the Vanguard Health Care ETF (VHT 0.79%). 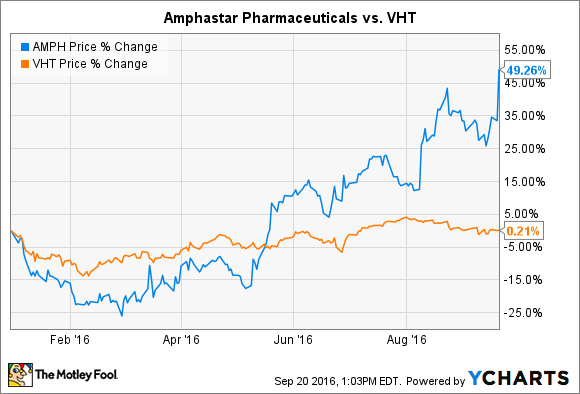 If you take a close look at the company's results it's easy to understand why shares are performing so well. Revenue is growing by double-digits, the company is profitable, and it has a pipeline packed with potential.

That pipeline includes four abbreviated new drug applications currently on file with the FDA, three biosimilar product candidates in development, and 11 other generic products in development. In total, Amphastar believes these products represent an addressable market of more than $26 billion, a massive number for a company with a market cap currently under $1 billion.

Given all of the above, it's not hard to understand why S&P chose to add Amphastar to its index. However, while a temporary share price jump is always fun, investors should remember that being included in the index will have no effect on the company's business. Therefore, if you were bullish or bearish on Amphastar's stock prior to Tuesday's jump, I see no reason to change your tune.