Please ensure Javascript is enabled for purposes of website accessibility
Log In Help Join The Motley Fool
Free Article
Join Nearly 1 Million Premium Members And Get More In-Depth Stock Guidance and Research
By Daniel B. Kline – Updated Sep 23, 2016 at 11:55AM

Both chains have similar food philosophies that have helped win over customers.

Chipotle has struggled since its food-safety scandal. Image source: Chipotle.

The Mexican chain pioneered the fast casual model where customers pay more (compared to traditional fast food) for higher-quality, recognizable ingredients. Panera has followed that trend by getting rid of artificial ingredients while trying to offer "clean" food, which it defines as "food that's simple, natural, unprocessed, and whole."

Both chains have gone for higher quality along with higher prices and both have been successful with it. Yes Chipotle has taken a big hit with its food safety scandal, but if you believe the company has an inherently good product then it's a question of when it will come back not if. In fact, if you believe in the Mexican eatery in the long run, it's recent travails could even be seen as an opportunity to buy at a discount. 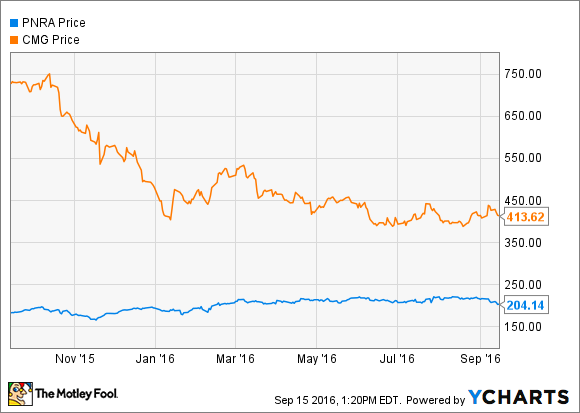 Chipotle stock price has been trending down for much of the past year. Image source: YCharts.com.

The case for Panera

Panera Bread has slowly moved from being just another bakery/cafe peddling bagels, soups, and sandwiches to being a leader in the clean food movement. The company has distinguished itself by making a number of promises about what ingredients it won't use in its food and explains its philosophy in a pretty clear fashion.

"We are committed to removing artificial preservatives, sweeteners, and flavors along with colors from artificial sources from the food in our bakery-cafes by the end of 2016," the company wrote on its website, adding a link to a list of artificial ingredients it will not use which it calls its No No List.

It's a promise not all that different from Chipotle's "Food with Integrity" tag line, which before its food-safety scandal, had been a driving force behind its business. Consumers have shown a willingness to pay more for better ingredients and that has helped Panera's sales move in the right direction.

In Q2 company-owned comparable net bakery-cafe sales rose 4.2% and over the last two years they have climbed by 6.6%.

"Our strong Q2 results reinforce the fact that our strategy is working and our initiatives are performing," said CEO Ron Shaich in the company's Q2 earnings release. "Panera is becoming a better competitive alternative with expanded runways for growth. At a time when other restaurant companies are feeling the impact of a slowing consumer environment, we are maintaining our momentum."

Panera is not the rock star Chipotle was pre-E. coli, but it has a well-defined niche which should provide steady growth, The chain is not reinventing the wheel, it's simply doing what a lot of rivals do with a focus on quality ingredients, and consumers seem to dig that.

In the short-term Chipotle has obviously been rocked by its food safety scandal. In the last six months, ending June 30, the company reported that revenue decreased 19.9% to $1.83 billion, and comparable restaurant sales decreased 26.5%. Those are abysmal numbers, but the entire question of whether to buy Chipotle  -- which you can see above has seen its stock price plummet -- revolves around whether you believe it can make a comeback.

Those numbers were the Chipotle story for a long time before tainted food derailed the chain. Going forward, it seems likely that eventually the public will forgive Chipotle and remember why it was so beloved in the first place.

Which eatery is a better buy?

Chipotle has historically been a rising stock which was sent back to Earth due to its food safety issues. At some point it's reasonable to believe the customers will come back and that should send its stock back toward its previous heights.

Panera has built a nice business, but Chipotle shares can be had at a discount. It may take time for the company to win back the public's trust, but by Q1 and Q2 2017 it should be on the road back posting some monster comps due to its terrible numbers this year.

Going forward Panera should be slow and steady, but Chipotle will ultimately be a redemption story and that should make it the better buy.

Daniel Kline has no position in any stocks mentioned. He has a cup from Panera that can be refilled for free until the end of the year (but is unsure if it's just where he bought it or at all locations). The Motley Fool owns shares of and recommends Chipotle Mexican Grill and Panera Bread. We Fools may not all hold the same opinions, but we all believe that considering a diverse range of insights makes us better investors. The Motley Fool has a disclosure policy.