The struggling retailer got some analyst love, which added to its recent post-earnings gains.

Shares of retailer Conn's (CONN -1.10%) soared on Wednesday following an analyst upgrade featuring a price target well above current levels. At 11:45 a.m., the stock was up more than 19%.

Stifel Nicolaus upgraded Conn's from neutral to buy, with a price target of $16 -- nearly $10 higher than the stock's 52-week low and $4 higher than levels reached following the upgrade. Conn's surged earlier this month when it reported its second-quarter earnings, despite miserable results and guidance. The stock is now up about 72% over the past month.

Conn's stock has been on a downward trend since early 2014, when trouble in its credit business forced the company to tighten up its lending standards. Its credit business is still posting major losses, and the segment's net loss more than doubled year-over-year during the second quarter. Tighter lending standards have also led to a slump in comparable sales, a double whammy that has decimated Conn's profitability. 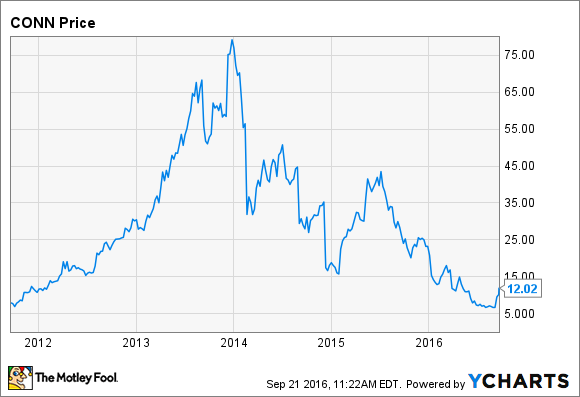 Putting a value on Conn's is tough because its credit business remains such a mess. Unlike typical retailers, Conn's finances the bulk of its customers' purchases in-house. This setup blew up in Conn's face in recent years, and at this point, there's no sign that the situation is improving.

Stifel believes that the stock fell too far, and it may be right. But investors would be wise to fully understand the risks associated with Conn's credit portfolio before plunging into the stock.