Artist rendering of MGM Resorts' new Cotai casino scheduled to open in the second quarter of 2017, a venue that could hit the jackpot. Image source: MGM Resorts.

MGM Resorts' (NYSE:MGM) decision last month to push back the opening of its new $3.1 billion Cotai resort to the second quarter of 2017 suggested China's gambling oasis of Macau wasn't ready for recovery. The delay, though, gives MGM a better perspective on what's working at rival venues, and despite it increasing the total costs of the project, adding about $100 million more to the tab, it could see the casino operator ultimately holding the winning hand.

Rolling the dice on recovery

Even with August gaming revenue turning positive for the first time in more than two years, it doesn't mean the good times are returning to Macau, but likely resulted from a bump in interest provided by Wynn Resorts (NASDAQ:WYNN) opening its own new Palace casino on the Cotai Strip. It's even possible the higher numbers will continue into September since Las Vegas Sands (NYSE:LVS) just opened its Parisian, too, but longer term, the slump in gaming revenue is likely to persist.

Macau, of course, is the only place in China where casino gambling is legal. There are 33 casinos located on the peninsula, and now with the Palace and Parisian opening, there are 12 more operating in the Cotai district. 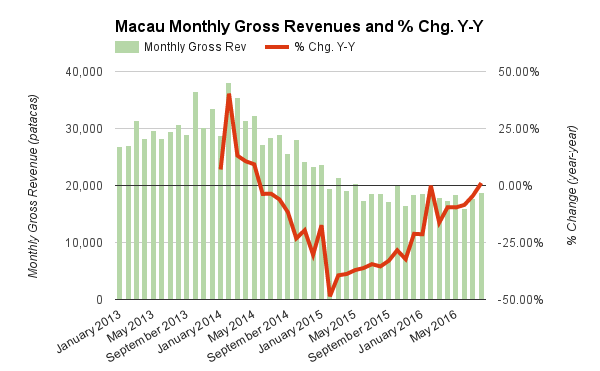 Beijing has attempted to control the development of gaming in the region by imposing a 3% limit on the annual growth of table games because that type of gaming, especially baccarat -- the so-called game of kings -- is a favorite of high-roller gamblers. A crackdown on financial corruption and luxury that focused on the flow of money into Macau resulted in VIP gamblers looking elsewhere for places to lay their bets, and the gambling oasis suffered through a 26-month decline in revenue that was only relieved by the opening of the Palace.

Yet Macau is also under orders to minimize its focus on the high-roller gamblers and become more family-friendly, like Las Vegas. As new venues open, they feature entertainment opportunities that have more mass appeal.

The jury is still out on whether all this non-gambling entertainment can successfully carry the city or its operators. Studio City has struggled to generate interest since its opening, turning in two straight quarters of disappointing results, and with the Parisian opening right next door, it may see more customers siphoned away. It's not clear that building more venues will expand the pie, or just cut up the existing slices more narrowly.

Which is why MGM Resorts will be closely monitoring its peers. MGM China's CEO Grant Bowie has already indicated the resort is keeping government dictates in mind, and said MGM was "working hard to make sure that we put everything in place and meet all of their requirements and objectives."

That could translate into a bonus on table game allotments, too. Although there are limitations in place, they're not hard and fast, but after granting Galaxy and Melco Crown 250 tables each in 2015, the gaming regulators only gave Wynn and Las Vegas 150 tables each this year. But MGM Resorts is the only new casino opening in 2017, and if it tailors its resort to the most successful ideas of its rivals, it may not only see an increase in tourist traffic to the venue but may get more table games allotted to it, too, boosting its gaming revenue and its bottom line.

Macau isn't healthy at the moment, and there's no real indication it's about to rebound, but the region is well off the bottom it hit, and MGM Resorts could be holding all the chips.