These three stocks are about as safe as it gets. 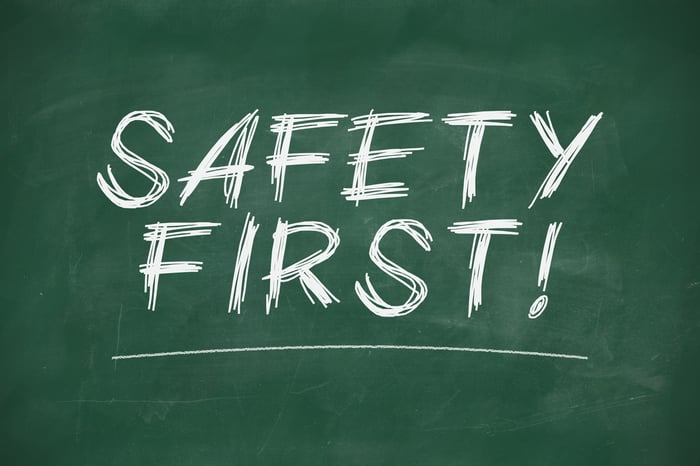 You're likely aware that stocks tend to be more volatile than other asset classes. That simple fact keeps many from putting money to work in the the stock market, which is a shame because stocks offer investors the best long-term returns.

So what can you do if you're interested in the stock market, but have a lower-than-average risk tolerance? The simple answer is to buy the lowest-risk stocks that you can find.

With that in mind, below is a list of three stocks that I think are about as safe as it gets.

Nobody is able to choose when they get sick, which keeps the demand for high-quality healthcare products up no matter what's going on in the economy. That fact makes the healthcare giant Johnson & Johnson (JNJ 0.08%) one of the most reliable investments in the entire market.

To demonstrate just how dependable this company's business is, consider this unbelievable fact: Johnson & Johnson has increased its adjusted earnings for 32 consecutive years. The company's track record of dividend increases is even more impressive, stretching out over the last 54 years.

So how has this company made itself so reliable? The secret is that J&J is very diversified. The company owns over 250 operating companies that are broken out into three major divisions: pharmaceutical, medical device, and consumer health products. These businesses sell countless individual products in 60 countries worldwide, with roughly 50% of sales taking places outside of the U.S. This setup ensures that the top and bottom lines continually move in the right direction, even if a handful of products or individual countries are struggling.

Of course, the market is aware of this company's reliability and has priced shares accordingly. It could be argued that at roughly 22 times earnings, J&J's stock is fairly valued given its single-digit growth prospects. I'd agree with that assessment, but if your goal is to minimize risk, then J&J's stock is still a great choice.

It's no stretch to say that consumers have become addicted to their cellphones. That fact has greatly benefited Verizon Communications (VZ -0.39%), the nation's largest wireless provider.

As a testament to just how loyal cellphone users have become, consider this: The postpaid churn rate among the big four telecom providers is consistently below 2%. That's unbelievably good, and yet this is an area in which Verizon, in particular, excels. Last quarter, Verizon's postpaid churn rate was an industry-leading 0.94%, which says a lot about the kind of brand loyalty that this company has created. 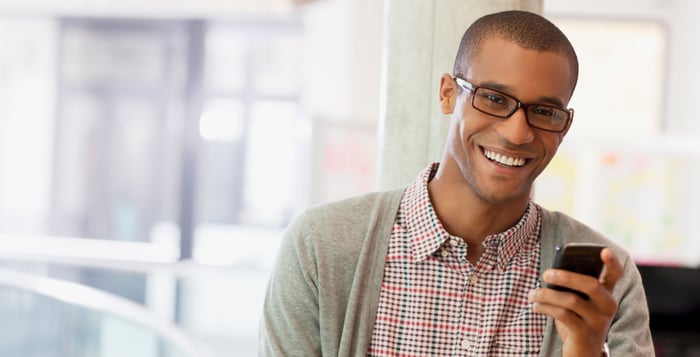 It's not hard to figure out why Verizon's customers are so loyal. The company has spent billions on advertising to convince consumers that its network is the biggest and most reliable in the country. When you look at the results, that looks like it was money well spent.

Of course, the wireless industry in the U.S. is very mature, so while Verizon is an extremely stable business, it's unlikely to put up big growth numbers anytime soon. Still, with a trailing P/E ratio under 15 and a dividend yield of 4.5%, any investor who hates risk should learn to love this stock.

Ride the coattails of the world's greatest investor

It's not easy to classify Berkshire as an investment, as the company has its hands in so many different parts of the economy. Berkshire owns a collection of more than 50 businesses, many of which you're undoubtedly familiar with. Ever insured your car with GEICO? Purchased a garment made by Fruit of the Loom? Bought paint from Benjamin Moore? Visited a Dairy Queen? Each of these businesses count themselves as part of the Berkshire empire.

Beyond its operating companies, Berkshire also owns a massive collection of publicly traded stocks. The company is best known for its huge ownership position in stalwarts like Wells Fargo, Coca-Cola, American Express, and IBM, but it also holds a position in a variety of other publicly traded companies.

In total, buying Berkshire Hathaway's stock is akin to buying a massively diversified mutual fund with the greatest investment manager ever at the helm. That makes this a wonderful choice for low-risk investors.

Buffett himself has stated that the best way to value Berkshire is to use the price-to-book ratio. He has even gone a step further by stating that Berkshire would be a repurchaser of its own shares at 1.2 times book value -- a price at which Buffett sees the stock as meaningfully undervalued. With Berkshire currently trading for just under 1.4 times book value, I'd argue that now is as good of a time as any to accumulate shares.