With acquisitions on the wane, Nuance stock could wax profitable again.

Things are not looking good for Nuance Communications (NUAN) stock. 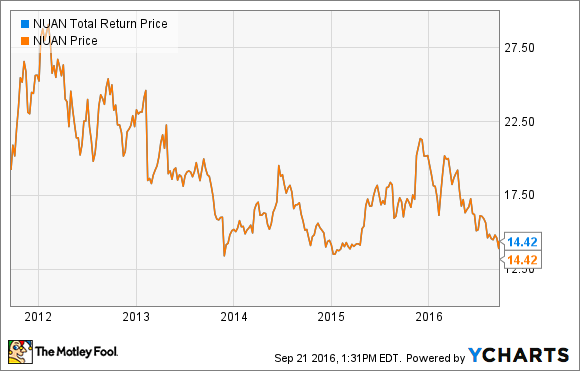 Nuance, the maker of the well-regarded Dragon Naturally Speaking voice-to-text software, stock has been on a downward trend for several years now, recently falling below $14 a share. Now mind you, today's price isn't the absolute worst that Nuance has seen over the past five years. In fact, a glance at its stock chart above shows there were at least two instances when the stock plumbed depths as low as these.

But here's the thing: Each time, after bottoming below $14 Nuance stock promptly perked back up.

And therein may lie opportunity.

Why Nuance is down

Nuance's latest slide began on Aug. 9, when Nuance reported a mixed quarter featuring a narrowed GAAP loss (but still a loss), combined with lowered guidance for both revenue and earnings for the rest of the year.

Management urged investors to look past the negatives and focus on its "solid performance... in our Enterprise segment and automotive business." This plea fell on deaf ears, however, as investors continued to sell the stock over the ensuing weeks.

But was that the right call?

Mind you, I've been a confirmed "Nuance skeptic" for years -- and for good reason. Once a profitable company, Nuance has struggled to earn a profit these past few years, losing a combined $380 million from 2013 through 2015, and reporting $42 million in net losses over the past 12 months. The rate at which Nuance has been losing money, however, has slowed significantly this past year. And indeed, by one measure at least, Nuance is actually earning quite a lot of money.

Consider free cash flow. Historically, Nuance has been a confusing company to evaluate in this regard, reporting large amounts of "cash from operations," and smaller amounts of "capital expenditures" on its cash flow statements. Ordinarily, this would result in a free-cash-flow positive company -- expect for the fact that data from S&P Global Market Intelligence clearly showed that the positive free cash flow the company was bringing in one door, was usually shoveled right back out another door for acquisitions of subsidiaries.

In my view, the regularity of these acquisitions made them an integral part of Nuance's business -- and made Nuance a de facto free-cash-flow negative company.

That business practice seems to have changed of late, however. In 2015, Nuance spent only $83 million on cash acquisitions -- less than one-tenth of its spending in 2012, for example. Over the past 12 months, such acquisitions consumed less than $30 million of Nuance's cash, and left the company with real, verifiable free cash flow of $498 million.

As a result, while many investors look at Nuance today and see a company that's still "losing money" and has a "negative P/E," I now view Nuance stock in a much more favorable light. Valued at $3.9 billion, and generating $498 million annual cash profit, Nuance stock now sells for just 7.8 times free cash flow. In fact, even if you factor Nuance's $1.8 billion in net debt into the picture, the stock's enterprise value-to-free cash flow ratio works out to a relatively benign 11.4.

When you weigh that against the 16% long-term earnings growth rate that analysts now posit for Nuance, I think the stock is actually looking pretty cheap. At least so long as Nuance can keep its wallet in its pocket, and avoid frittering away cash on ill-considered acquisitions, it looks cheap.

Granted Nuance changes the facts again, I reserve the right to change my opinion again as well. But for now... consider me bullish on Nuance.

Fool contributor Rich Smith does not own shares of, nor is he short, any company named above. You can find him on Motley Fool CAPS, publicly pontificating under the handle TMFDitty, where he's currently ranked No. 280 out of more than 75,000 rated members.

The Motley Fool recommends Nuance Communications. We Fools may not all hold the same opinions, but we all believe that considering a diverse range of insights makes us better investors. The Motley Fool has a disclosure policy.