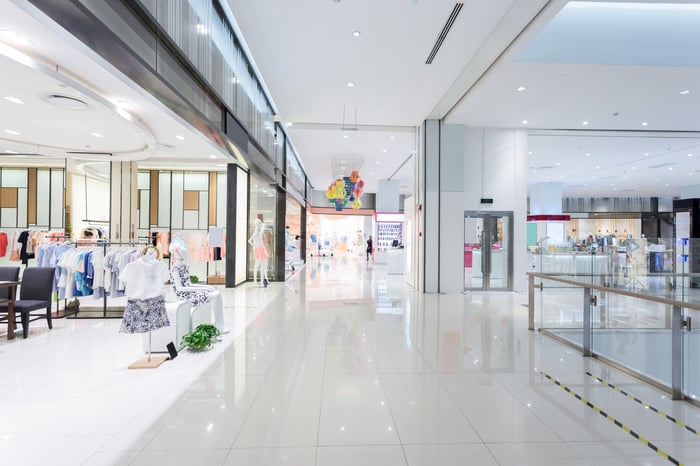 Shopping malls might no longer be ghost towns, but there are still too many retail stores open in a world dominated by e-commerce. Image source: Getty Images.

Are there enough stores for retailers to close to offset the impact of Amazon.com (NASDAQ:AMZN)?

Macy's (NYSE: M) announced last month it identified 100 stores it will close in a bid to offset six straight quarters of declining comparable store sales. The reduction equates to 12% of its store base and exceeds the combined number of store closings the retailer has initiated over the last six years.

Where some companies like Sears Holdings (NASDAQ:SHLDQ) probably don't even have enough stores in its portfolio to close to offset the damage being done, others don't seem to fully appreciate the threat they face and aren't doing enough to sufficiently offset the Amazon effect.

Retail has too many stores

After Macy's made its announcement, both Kohl's (NYSE:KSS)  and J.C. Penney (OTC:JCPN.Q) said they didn't see the need to follow suit, with the latter even going so far as to say Macy's shoppers will have to go somewhere and that direction just might be to its stores. They're missing the larger picture.

Retail remains "overstored" with too many locations that can't support declining customer traffic. According to data compiled by the industry watchers at ShopperTrak, retail store foot traffic has plunged 57% between 2010 and 2015, and shoppers are checking their mobile devices before making a purchase.

Some in the industry seemingly don't want to accept the notion that many of their stores aren't needed. Instead of closing locations, they're just reducing their size. Wal-Mart (NYSE:WMT), which did announce it was closing almost 270 stores this year (though most were not in the U.S.) has stepped up the pace of opening more Neighborhood Express stores that are orders of magnitude smaller than its superstores. Target (NYSE:TGT) has opened 23 small-footprint stores so far this year, plans to open another nine by the end of the year, and intends to open at least 16 in 2017. Even Swedish home goods store Ikea, where you literally need a map to make your way through its stores, opened more small-format click-and-connect stores this year than it did its traditional ones.

Some retailers are getting the message

But there is a dramatic reduction coming in the number of stores that will be open.

Whether that's enough remains to be seen. Even with the bankruptcy of retailers like Aeropostale, Eastern Mountain Sports, Pacific Sunwear, and Sports Authority, which will see most of their stores disappear from the landscape, retail square footage is growing.

Malls are not the draw they once were and department stores have lost their ability to attract customers. Real estate research firm CoStar reports annual department store retail sales have tumbled 28% since their peak in 1999, and revenues have slid every single year except one to end 2015 at $165.5 billion.

All the while Amazon.com is getting stronger, recently reporting its third consecutive quarter of record profits by generating $857 million in earnings on sales of $30.4 billion.

Maybe the mixed signals come from Amazon itself, which is said to be opening 100 pop-up stores this year, giving hope that physical locations aren't a dead end. But until more brick-and-mortar retailers do more to eliminate their excess square footage, the e-commerce king will continue to wreak havoc on their sales.