This isn't just an update -- it's a total overhaul. Here's how it highlights Tesla's software prowess.

Tesla Motors' (TSLA -0.48%) 8.0 update for its vehicle software is "a major overhaul on almost every level compared to V7," CEO Elon Musk promised on Twitter this week. With the updates beginning to roll out to customers on Thursday morning, the details of the update are now available on the company's website -- and the software doesn't disappoint.

Here's an overview of some of the changes.

"Software update 8.0 kicks off a significant over-the-air overhaul of the Tesla touchscreen and introduces the biggest UI revamp since the launch of Model S," Tesla said in a statement Thursday morning.

Beyond unveiling an update to the overall design of the touch buttons, windows, and graphics on the 17-inch display, the company outlined some more specific changes:

Voice commands: Voice commands can now be used with a single tap (as opposed to the previous method of holding a button down). And transcripts of commands are now displayed on the instrument panel. 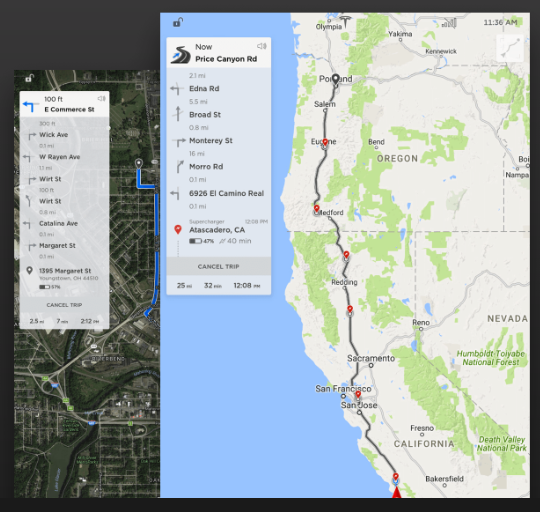 Maps and navigation: The maps and navigation system received a significant update. Namely, the app is now optimized to take advantage of the entire 17-inch touchscreen. Other changes to maps and navigation include the ability to navigate to home or work "with a single swipe" and zooming that "adjusts based on location to display what you need to see most." In addition, Trip Planner (Tesla's trip-planning software that automatically calculates charging requirements and routes vehicles for the most optimal charging solutions) now provides "a clear overview of your journey before you leave."

Impressively, Tesla's sweeping UI changes are applied to a wide range of vehicles, including the first Model S deliveries from 2012.

As Tesla previously announced, Autopilot in the 8.0 update benefited from a breakthrough in the way the vehicle's radar sensor works. Radar now serves as a primary control sensor, no longer requiring the camera to cross-check its image recognition. This means Tesla vehicles will "almost always hit the brakes correctly," Tesla said in a blog post when it announced the addition of radar. Tesla believes the increased importance of radar will dramatically improve the safety of its vehicles, making them "by far" the safest vehicles on the road.

Several features of Autopilot receive notable improvements in the update:

Tesla didn't list all of the improvements to Autopilot, as the company asserts there are "hundreds of smaller tweaks that add up to a significantly improved experience behind the wheel," Tesla said on Twitter Thursday morning.

Other interesting updates in 8.0 include what Tesla calls Cabin Overheat Protect and improved regenerative braking.

Cabin Overheat is an "industry-first" safety feature "focused on child (and pet) safety," Tesla says. The feature keeps the car at safe temperatures, even when it is off.

"This feature is only made possible by an electric vehicle with Tesla's uniquely large battery packs," Tesla explained.

In addition, while not highlighted in Tesla's statement to press or on the company's website, the last footnote in Tesla's 8.0 software release notes says generative braking has been improved, enabling slightly more rapid deceleration "to recapture more energy."

More than any previous Tesla software update, version 8.0 includes substantial changes that highlight the company's software prowess. The ease with which Tesla can appreciably improve its vehicles after they have been delivered with a simple over-the-air software update puts the spotlight on a core competency no other automaker has come close to matching.