Gilead Sciences (NASDAQ:GILD) is a biotech Goliath generating $30 billion in annualized sales and $14 billion in annualized net income. However, shares have fallen in the past year. Does Gilead Sciences' falling share price offer an opportunity to buy, or should investors stay away? Here are some things to consider before deciding if this company is right for your portfolio.

The company's HIV drug franchise generates more than $10 billion in sales across a slate of different medicines, including six different drugs that are selling at billion-dollar blockbuster clip or better.

Many of the company's top-selling HIV drugs are combination therapies that reduce patient pill burden and have proven to be a hit with doctors. Yet, if there's been one knock against Gilead Sciences' HIV therapies, it's been their inclusion of the popular HIV drug, Viread. Viread has been associated with kidney damage and that's kept doctors from prescribing Viread-based therapies to high-risk patients.

For example, U.S. sales of Genvoya nearly doubled from Q1 and Genvoya's sales pace makes it the most successful HIV launch in more than a decade. In only six months, Genvoya has become the most prescribed regimen for both treatment-naive and switch patients. Thanks to new drugs like Genvoya, Gilead Sciences' HIV sales increased 15% year over year to $3.1 billion in the second quarter.

The company's Sovaldi, the backbone of Gilead Sciences' hepatitis C product lineup, is sold as both a monotherapy for use in tough-to-treat hepatitis C genotypes and as part of the combination therapies Harvoni and Epclusa. Harvoni is commonly used in genotype 1 hepatitis C and earlier this summer, Epclusa won FDA approval as the first pan-genotype hepatitis C drug.

Sovaldi and Harvoni sales were $1.4 billion and $2.6 billion in Q2, respectively, and although it was only available briefly in the quarter, Epclusa sales were $61 million. Epclusa is being positioned by Gilead Sciences as a Sovaldi replacement in genotype 2 and genotype 3 patients, two indications that represent about 30% of the U.S. hepatitis C patient population. Since Epclusa delivers best-in-class cure rates and safety (and its net cost should be higher than Sovaldi), it's likely to become another billion-dollar blockbuster drug for Gilead Sciences.

Gilead Sciences sits atop the leader board in HIV and hepatitis C, but ViiV Healthcare, AbbVie (NYSE:ABBV), and others are attempting to knock it off its perch.

ViiV Healthcare is a joint venture between GlaxoSmithKline (NYSE: GSK), Pfizer, and Shionogi that competes against Gilead Sciences in HIV, and ViiV's recently launched drugs are enjoying rapid sales growth.

GlaxoSmithKline, which owns about 80% of ViiV, reports that HIV revenue jumped 44% year over year in  to $1.1 billion in Q2, at current exchange rates. The increase in sales came courtesy of Tivicay and Triumeq, two HIV therapies that have launched over the past couple years. Tivicay sales were $293 million, up from $56 million last year, and Triumeq sales more than doubled to $533 million in Q2.

Gilead Sciences also faces threats from AbbVie and Merck (NYSE: MRK) in hepatitis C. AbbVie's Viekira Pak competes head to head against Gilead Sciences' Harvoni in genotype 1, and because of an exclusivity deal between AbbVie and pharmacy-benefit manager Express Scripts, Viekira Pak's sales were $1.6 billion in 2015 and $419 million in the second quarter. AbbVie hopes to increase its hepatitis C sales next year by launching a next-generation hepatitis C drug currently in development that could compete with Epclusa.

The increasingly competitive hepatitis C market is already taking a toll on Gilead Sciences' top line. Harvoni's sales were $2.6 billion last quarter, or about $1 billion less than a year ago.

Gilead Sciences isn't immune to competitive risk, but it's a proven player that's out-competed peers in the past and that fact shouldn't be ignored by investors. Although it's unknown how the battle for HIV and hepatitis C market share is going to shake out, Gilead Sciences' TAF and Epclusa show it isn't resting on its laurels.

Overall, while Gilead Sciences shares may make little headway in the short term, TAF-based products, Epclusa, and new drugs in the R&D pipeline could make this a good time for long-term investors to be buying. That's especially true now that the company's shares can be bought for less than 7 times next year's earnings estimate -- a multiyear low. 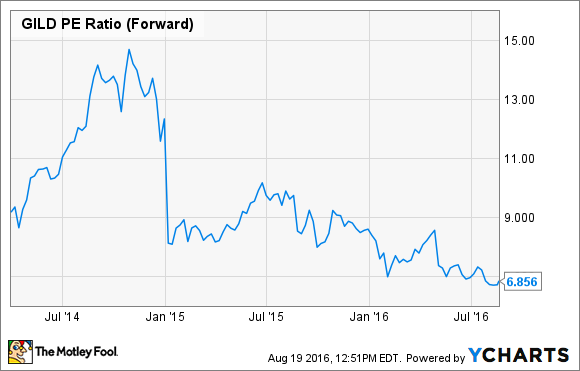