'"Monday Night Football" ratings are down significantly from last year, and the declines are likely to continue. 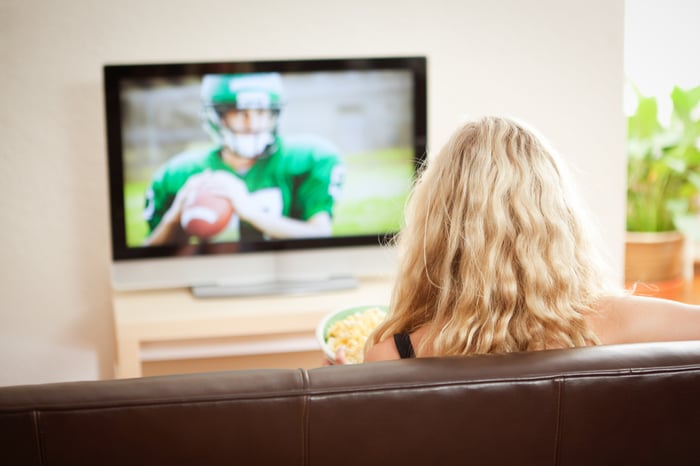 It's two weeks into the NFL season, and ratings for Monday Night Football on Walt Disney's (DIS -0.15%) ESPN network are lagging substantially behind those from previous years. The most recent broadcast, a match-up between the Philadelphia Eagles and the Chicago Bears on Sept. 19, saw ratings fall 11% compared to last year's Week 2 game, dipping to their lowest point since at least 2009.

For the season-opening double header that took place on Sept. 12, ratings for the first game were down around 7%, while the second game saw ratings fall roughly 25% from the corresponding broadcast last season. The second game's ratings were the lowest since 2008.

The drops look set to continue on Sept. 26 as the game between the Atlanta Falcons and the New Orleans Saints will be up against the first debate between Presidential candidates Hillary Clinton and Donald Trump, with estimates suggesting that viewership for ESPN's game could be down as much as 20% year-over-year.

Monday Night Football delivers ESPN's highest rated broadcasts and is the most viewed series on cable, so substantial performance declines will have a meaningful impact on Disney's bottom line if the trend continues. The company spends roughly $1.9 billion per year for rights to Monday night games and is locked into a deal with the NFL through 2021.

The current deal took effect in the 2014 season, with the price that Disney paid for per-year broadcast rights increasing 73% from what it paid in 2013. Lower viewership will mean lower ad revenues, which could put pressure on Disney's ability to raise affiliate fees. Also, any indications of a broader loss of interest in the NFL could accelerate cord cutting.

The falling ratings appear to be the result of a confluence of factors. Higher interest in competing broadcasts, team match-ups, and less exciting games are part of it but also the political controversy surrounding players and the national anthem are coming together to push down viewership for primetime NFL games.

Keith Noonan has no position in any stocks mentioned. The Motley Fool owns shares of and recommends Walt Disney. We Fools may not all hold the same opinions, but we all believe that considering a diverse range of insights makes us better investors. The Motley Fool has a disclosure policy.