Cameco and uranium go hand in hand, which is good and bad. Here are three reasons to worry about the connection.

Cameco Corporation (CCJ -1.15%) is the largest pure-play uranium miner traded on the public markets. That makes it a great way to play the potential growth of nuclear power, but it also means there's a lot of risk involved if nuclear power's growth doesn't go as expected. Here are three reasons Cameco Corporation's stock could fall -- reasons even the most die-hard nuclear-power backer should be thinking about.

Nuclear is good and bad

Investing in the future of nuclear power looks like a good idea if you look at some of Cameco's demand projections. For example, right now, there are 60 nuclear reactors under construction, with roughly two thirds expected to come online over the next three years. Emerging nations like China and India, where demand for power is growing along with each country's move up the socioeconomic ladder, are major backers of the push. Better yet, new nuclear power plants are projected to outdistance plant retirements, meaning more demand for uranium.

This is why mining giants like Rio Tinto (RIO -0.70%) are in the space, but uranium accounts for only about 1% of the Goliath's revenues. And smaller players like Energy Fuels Inc (NASDAQ: UUUU) are basically penny stocks. So, Cameco is really the best way to play the space if you're looking for direct exposure to uranium. But nuclear power has a darker side.

The most recent example of the negatives surrounding nuclear power came in early 2011, when Japan's Fukushima power station melted down. To be fair, the plant was hit by an earthquake and a tsunami -- extreme conditions to say the least. But that didn't stop Japan from shutting all of its nuclear fleet. Over five years later, it's only just beginning to restart some of those plants. And Germany, which swore off nuclear power after Fukushima, hasn't shifted its view of the power source. 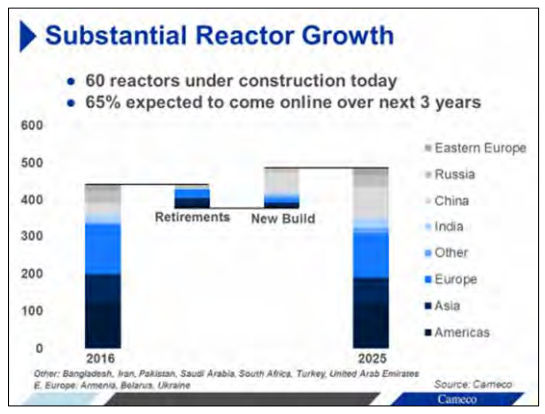 Another event like Fukushima would likely lead to more questions about the long-term risks and, ultimately, the viability of nuclear power. It's highly likely such an event would also push Cameco's shares, which are tied at the hip to uranium, lower.

This brings up another issue that could lead to lower prices: environmentally friendly alternative energy like wind and solar. It's a bigger-picture issue, but one you can't ignore if you're looking at Cameco. Even though nuclear power doesn't emit carbon dioxide and can provide base-load power, it may not be selected as the best way to address the global warming issue.

To give you an idea of what that means, despite the United States' push to reduce carbon emissions, the United States Energy Information Administration (EIA) doesn't expect any growth in U.S. nuclear power between 2015 and 2040. That's true even if currently proposed clean power regulations go into effect. The EIA expects clean energy to pick up the lion's share of the declines in "dirty" fuels like coal. Add in Germany's decision to get out of nuclear, and you start to see a little trend.

The issue is more than just image here, though that's a part of the problem. The longer-term risk is really that solar and wind are increasingly cost competitive options. For example, utility scale solar and wind are cheaper options on a levelized cost per megawatt hour of electricity than nuclear--even before taking into account government subsidies.

Levelized costs take into account all of the costs, from construction to fuel, of generating power. That can materially alter how a power options looks, since solar and wind don't have fuel costs. And in this case, wind and solar keep looking better as their technologies improve while nuclear appears stuck in a relatively costly range.

If more countries decide renewable energy is a better option than nuclear power, demand for Cameco's only product could stall, or even decline. The stock would clearly sink. That outcome doesn't look likely right now, but you have to watch these emerging technologies as they get better and better and, perhaps more to the point, cheaper and cheaper to install and run.

Those are some big-picture reasons to be worried about Cameco's stock price, but how about one that's pretty specific and that looks increasingly concerning: the dividend. If Cameco were to cut its dividend, the stock would most likely take a notable hit. After keeping it steady through the commodity downturn, though, it looks like the miner is pretty intent on protecting the payout.

That's great, but for how long, and at what cost? For example, Cameco's cash balance has fallen over 75% between the start of 2015 and June of this year. Clearly, supporting its business and paying the dividend has been a costly affair. Worse, the company has lost money so far this year -- before and after one-time adjustments. That makes it even harder to come up with the cash to pay dividends.

It's entirely possible Cameco could sustain the dividend by issuing debt or selling stock. And with debt only making up around 20% of the balance sheet, the miner clearly has the financial flexibility to take on more debt, even if a relatively low stock price suggests it might be hesitant to sell shares. But if uranium prices remain moribund, at some point, these options won't be nearly as desirable, and it could be the dividend that gets trimmed to save cash.

The long-term story at Cameco is all about the future of nuclear power and how it will compete with newer alternatives. Uranium, unfortunately, comes into this fight with a notable handicap, so it's important to watch the growth of solar and wind, and to always remember that a nuclear meltdown could have a swift and severe impact on Cameco's stock. Looking a little closer at Cameco, meanwhile, shows that the long uranium downturn appears to be starting to strain the company's finances a little. A dividend cut could be one of the first big signs that Cameco is getting worried, and it would almost certainly lead to a lower stock price. If you own or are watching Cameco, these are three notable reasons the stock could fall.