Please ensure Javascript is enabled for purposes of website accessibility
Log In Help Join The Motley Fool
Free Article Join Over 1 Million Premium Members And Get More In-Depth Stock Guidance and Research
By Ashraf Eassa – Sep 23, 2016 at 11:07AM

This future chip manufacturing technology looks evolutionary rather than revolutionary.

Although much about this upcoming technology remains a mystery, I have a key detail about the technology to share.

In late 2011, Intel went into production on its 22-nanometer technology. This technology was unique because it was the first implementation of a transistor structure, known as a FinFET, to go into high volume manufacturing. In a nutshell, FinFETs (which Intel marketed as "Tri-Gate") enable substantially better power/performance than prior generation "planar" transistors. 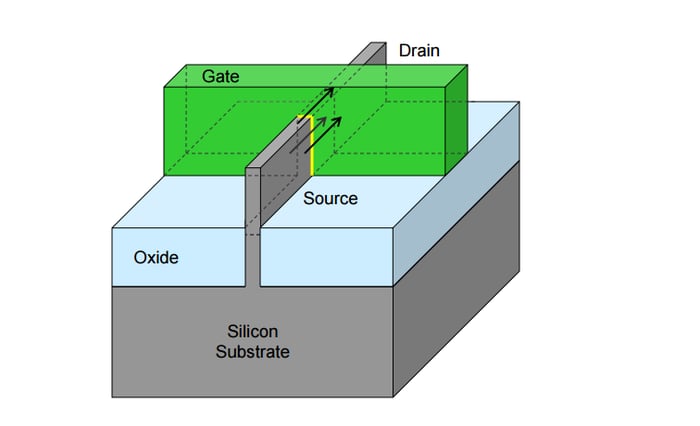 At 10-nanometer, Intel has already publicly said that it will continue to refine the FinFET transistor structure, and since Intel is planning three iterations of 10-nanometer, the FinFET is likely to be Intel's transistor of choice for several years to come.

There had been some speculation that Intel could move away from the FinFET technology when it transitions to its 7-nanometer technology (after all, the FinFET will be nearly a decade old by the time this technology ramps into production), but it would appear that this won't be the case.

According to a LinkedIn profile of an Intel engineer, Intel's 7-nanometer technology will, indeed, be a further refinement of the FinFET structure, as you can see below:

If we assume that Intel spends three generations on 7-nanometer before transitioning to 5-nanometer (as the company is on track to do with 14-nanometer and plans to do with 10-nanometer), then it might not be until 2023/2024 before Intel transitions to a post-FinFET transistor structure.

What else do we know about 7-nanometers?

At a recent presentation, Intel also provided some insight into the transistor density/cost metrics that it aims to deliver with its 7-nanometer technology. 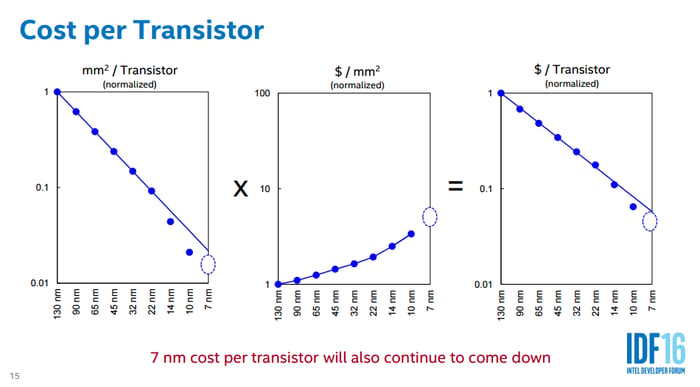 Indeed, based on the above image, it looks like Intel is promising both area and cost-per-transistor reductions, although it seems as though the company hasn't quite nailed its targets down yet.

The upshot, though, of lower area and ultimately cost per transistor is that chips with more transistors can be made more cheaply on a newer, denser technology than on an older, sparcer technology. The one caveat, though, is that these cost-per-transistor calculations assume equivalent manufacturing yields, something that -- at least with Intel's 14-nanometer technology -- isn't the case when a new technology goes into production.