Las Vegas Sands (LVS 2.50%) finally opened its long-awaited Parisian Macao resort in mid-September, a nearly $3 billion investment on Macau's Cotai Strip. This is not the only new resort on the strip, as Wynn Resorts (WYNN 1.73%) and Melco Crown (MLCO 11.54%) have each opened their own new resorts there this summer. However, it does look to be the best suited to gain if Macau really is able to make a resurgence.

First look at The Parisian

Inspired by Paris and in a similar theme to the nearby Venetian Macao, the Parisian Macao is a lavish resort, including an Eiffel Tower replica at 50% scale. The resort has 3,000 guest rooms and suites, multiple restaurants, convention and meeting space, nearly 500,000 square feet of retail space, a 1,200-seat theater, and a water park.

The Macau government awarded the Parisian just 150 gambling tables, with 100 tables now and another 25 more allowed to be included at the start of both 2017 and 2018. That's down from the 250 tables Las Vegas Sands sought. However, Las Vegas Sands is allowed to take some of its tables out of other resorts to add them to this new resort, so the actual number in the new resort will be higher.

Macau could be on the way back up

The Chinese government decided in the summer of 2014 to begin placing restrictions on travel to Macau and to limit the amount that VIP gamblers can spend there. The industry took to a major, and most of the casino operators there have seen their revenues and stock prices hammered since.

Then in August, gross gambling revenue in Macau rose year over year for the first time in 26 months. Even though that rise was just 1%, it has been seen as the start of what could be a turnaround for Macau. The positive gambling revenue growth is not the only encouraging news out of Macau, either: Total visitation fell slightly in 2015 over 2014, but amid easing visitation regulations in June of this year, those numbers have been growing year over year by around 5% for each of the following three months. And the Macau Government Tourism Office expects that visitation could grow around 3% to 5% annually through 2025.

Why Sands is the best bet on Macau's mass-market growth

"Before our very eyes, Macao is making a similar transition to the one it took Las Vegas decades to make," Las Vegas Sands CEO Sheldon Adelson said in a release, "evolving from a destination only suited for gaming customers, to an environment which still provides a safe and reputable gaming experience, but also offers a wide variety of activities, attractions, and amenities for people of all backgrounds, income levels, and interests."

In simpler terms -- Macau is transitioning to a mass-market gambling environment that will grow more from lower-dollar gambling and total entertainment value than from high-net-worth VIP gambling. It's that mass-market segment that Las Vegas Sands looks the best prepared to gain from. With its four other properties, Las Vegas Sands controls nearly half of the total rooms that gambling companies operate in Macau. 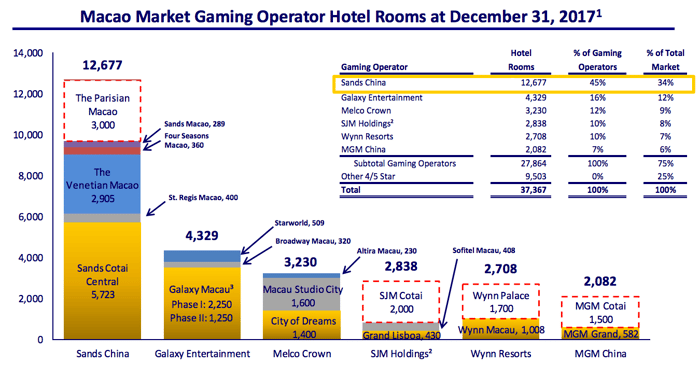 Las Vegas Sands is also growing its share of market EBITDA in Macau. According to the company's Q2 earnings presentation, it has grown its market share of total EBITDA to around 38%, while nearly every other operator's share fell over the last year. CLSA analyst Jon Oh predicts that the Parisian Macau will add another $198 million in 2017 and $362 million in 2018. 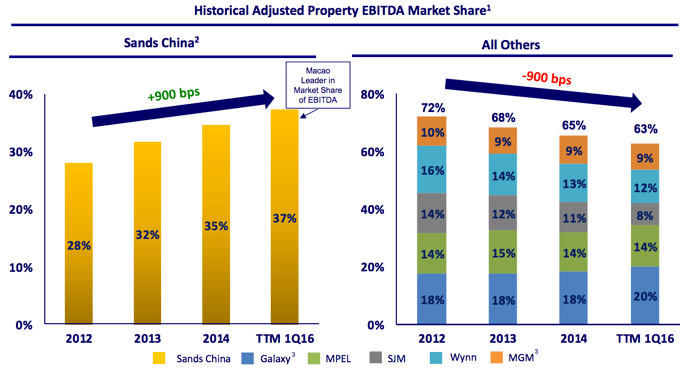 Macau certainly isn't a sure bet yet -- one month of slight growth isn't enough to say that the industry is preparing to take off again. Still, the region does seem to be at least stabilizing and has given plenty of indication that future growth is possible. As the market leader already and with a new resort that looks poised to serve the mass market that increasingly makes up Macau's future growth potential, Las Vegas Sands looks like the clear bet here.