A transition to new technology

Himax has carved out a niche in the last decade building display drivers to power monitors for everything from televisions to smartphones. Last year was a struggle, though, as small- and midsized display demand followed smartphone and tablet demand down. 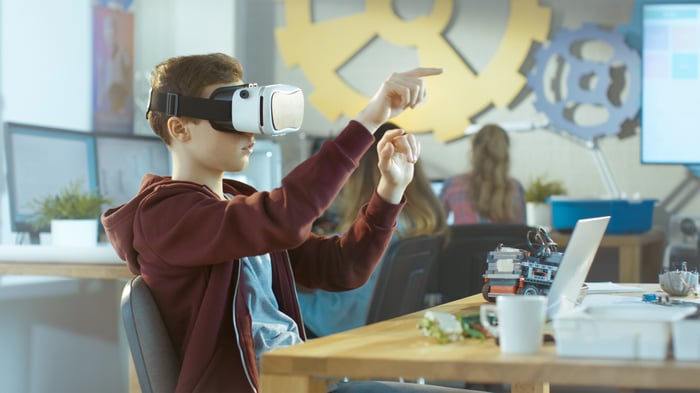 To investors' delight, the company has quickly rebounded and found new outlets for its hardware. During the last reported quarter, displays for the automotive industry showed the strongest growth. China has led the way higher for Himax, as the IoT movement takes hold there. Smartphone sales have started to pick up, more and more Chinese vehicles are featuring a smart screen in the dash, and high-definition and smart TV sales are also gaining speed.

The company also has new hardware offerings in addition to display drivers. Display drivers still made up 79% of sales last quarter, but gaining ground quickly is the timing and touch display controller, image sensor, and augmented and virtual reality business.

That division grew by 34% year over year last quarter. As a result of that growth, Himax reports barely being able to keep up with the influx of new orders for the second half of 2016. The company is investing to expand operations so as to accommodate the higher volume. Investors are to expect only high-single-digit sequential growth next quarter, although year-over-year growth is still expected to come in in the double digits.

In the last quarter, revenue improved 19% over the same quarter last year. Bottom-line profits increased 124% from the same period last year. Himax expects both metrics to continue improving through the end of 2016 on increasing sales out of China, a rebound in electronics sales in developed countries during the holidays, and continuing demand in its non-driver business.

Riding the coattails of semiconductor growth

Advanced Semiconductor Engineering, or ASE for short, provides packaging and testing services for other semiconductor companies. ASE's clients come primarily from Asia and North America, and the company acts as an extension to final production operations for its technology clients.

As worldwide demand for electronics hardware recoups from summer 2015's slump, ASE has seen demand for its services inch up as well. If semiconductor companies get busy, so does ASE. The drawback for shareholders is that the company is largely at the mercy of these semiconductor businesses, for better or for worse.

Revenue decreased 11% year over year but is rebounding from the dip in sales seen in the last year. Profits were up 28% year over year and 12% over the previous quarter, driven primarily by falling cost of sales from a year ago. ASE anticipates total sales getting back to levels from a year ago during the next quarter as global semiconductor sales pick up during the second half of 2016.

It is worth noting that ASE is in the midst of a merger with Taiwanese rival Siliconware Precision Industries (NASDAQ: SPIL) after the boards of both companies approved the deal in late June. While both companies will maintain independent operations under the newly created business, the deal seeks to create cost savings and competitive advantage by sharing resources between the two.

The deal looks like a good fit for ASE and looks to complement the current business strategy of increasing profitability by cutting expenses. The merger could also help both companies increase capacity, a problem both are investing in so as to ramp up production and total sales.

At the moment, Himax provides better visibility for shareholders on the path forward for its business. While ASE also looks like a solid bet, a few uncertainties arise regarding the specific long-term business strategy the company wil adopt should the merger with Siliconware go through. The company also acts as an extension of its own clients' operations, which makes ASE's business performance dependent on that of others.