Revenue and profit growth disappointed investors following the release of Texas Roadhouse's (NASDAQ:TXRH) second quarter results. Shares are off their all-time highs even though the company is serving up more meals than ever and has launched a new sports bar, Bubba's 33.

What happened during the last quarter, and is the company's new dining experience concept the key to continued growth?

During the last quarter, revenue and profit increased 11.9% and 56.7%, respectively, from the year-ago period. The company opened 29 total restaurants in 2015 and saw existing restaurant sales grow by 4.5% for company-owned locations and 2.6% at franchised ones.

All of those figures helped contribute to the great sales and profit numbers, but the stock still ended up taking a breather over the next several weeks. Why? 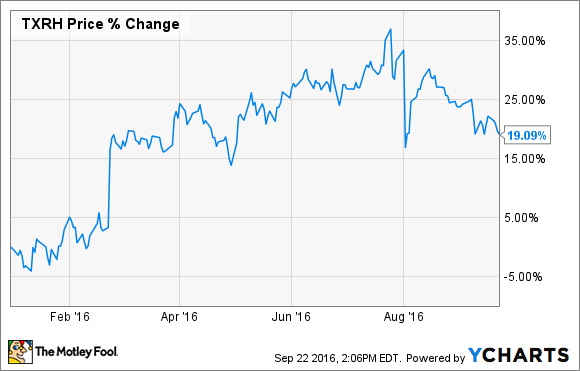 Though sales grew by double digits, they lagged the average of over 13% over the past few years. Combined existing restaurant sales were 3.7%, below the 5.1% growth reported partway through the quarter earlier in the summer and also trailing the 7.2% gain logged last year. Still, for the first half of 2016, Texas Roadhouse is turning in a solid year of top and bottom line growth.

However, the company now has over 500 restaurants, and some company followers are concerned that the growth from new openings will start to slow down. During the earnings call, founder and CEO Kent Taylor had this piece of advice for investors: "We also continue to tell our folks to turn on their TV and internet news feeds less, so they continue to stay positive in this increasingly negative media world."

With that piece of advice in mind, the casual diner has been working on a way to keep sales growth moving forward.

A new chain in the works

At last report, Texas Roadhouse had opened 14 new restaurants year-to-date. The plan is for a total of 30 new locations in 2016 with at least eight of those being the Bubba's 33 sports bar concept.

Where the original chain is best known for steaks, ribs, and Texas-style hospitality, Bubba's 33 looks to capitalize on the sports-bar scene. The "generous portions at a value" slant will continue, but Bubba's will shift from the typical steakhouse fare to burgers, pizza, and chicken wings.

After a couple of years testing out the idea in select markets, the company is ramping up expansion efforts. The eight planned openings in 2016 may look modest, but that's double the number launched in 2015. Five more are slated for ribbon-cutting by the end of the year, which would bring the total count up to 16. Currently, the bulk of restaurants are located in Texas and Indiana, with single locations in four other states.

Specific numbers for Bubba's aren't broken out, but CFO Scott Colosi reported mixed results, but not bad ones, from the new chain so far. Certain locations have performed well, while others have lagged behind. Despite mixed sales, though, Colosi said that profit margins have come in strong.

The reason can be attributed to the lower-cost food at Bubba's versus the steak-and-ribs affair at its core brand. Being a sports bar, beer and alcohol are prominently featured -- traditionally higher-profit margin items.

The company is also testing a smaller format restaurant. Most locations have been 8,900 square feet, but the latest Bubba's opened in Clarksville, Indiana is only 7,700 square feet. Taylor reported that the company has found that a smaller kitchen can maintain the same volume of food output as the larger format. Thus, the company can spend less on building and maintenance costs but still shoot for a similar level of sales as the larger-footprint locations.

After doubling the number of Bubba's 33 restaurants by the end of 2016, Taylor says the company will probably build even more next year, though the exact number hasn't been determined yet.

Will sales growth keep up?

The company has managed to deliver double-digit gains year after year, despite the recent tantrum some investors threw as a result of the second quarter report.

The company projects expansions of both Roadhouse and Bubba's 33 restaurants. Also boosting results is the expectation that foot traffic will keep ticking up in the mid-single digits this year at both chains. With management feeling optimistic enough to start planning an increasing number of new opens, it appears the company's new chain is set to sustain the growth trend.