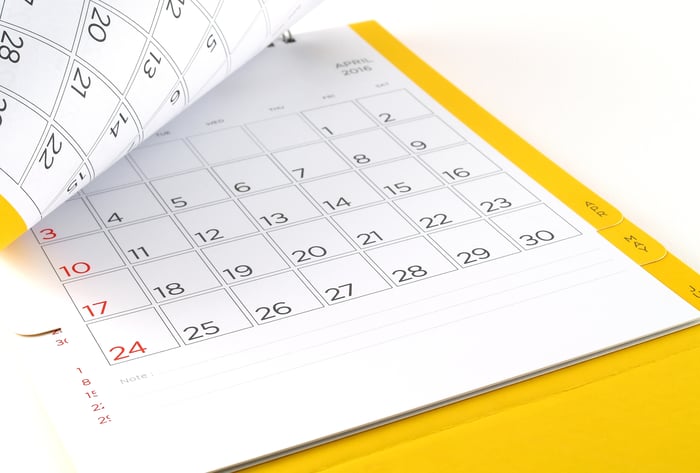 Most investors think in terms of choosing companies that will rise in value over the long run. Yet some options strategies are designed to focus much more on the timing of gains. In particular, a calendar spread involves buying one option with a particular strike price, underlying stock, and expiration date, and then selling another option with the same underlying stock and strike price but a different expiration date. Also known as time spreads or horizontal spreads, calendar spreads can be either bullish or bearish, but they involve a different way of thinking about investing than most people immediately grasp. Let's look more closely at calendar spreads to see when they might be useful.

Fast forward to March and, say, the price of the stock hasn't budged from $100. The March option you sold will expire worthless, because the holder won't exercise an option with a strike price of $105 when the stock trades at $100. That means that you'll pocket the premium you received from selling that option.

On the other hand, the value of the option that you bought will also have gone down, because two months have gone by, using up some of the option's time value. However, most options tend to see their time value decay more quickly when they're close to expiring than when expiration is still far away. Therefore, when a stock is flat, that tends to be good for long calendar spreads involving calls.

By contrast, look what happens if the stock soars to $150. The call option that you sold will jump in value to a bit more than $45, or $150 minus the $105 strike price. The call option you bought will also climb above $45, offsetting most of the loss from the option you sold. But because both options are so deeply in the money, the bump from the extra time value will be less than it was when the stock traded closer to the options' strike price. That will result in the position having a slight net loss.

Why calendar spreads are so flexible

Notice, however, that calendar spreads don't have to look exactly like this. For instance, consider the following:

Should you use calendar spreads?

With the other strategy, when the shorter-dated option expires, you simply close out the calendar spread position. That makes the calendar spread entirely about time value and the different rates at which it decays. That's a common mindset with options investing, but it takes some getting used to for investors used to thinking about long-term prospects.

Calendar spreads open a new horizon to options investing, letting you profit based on the timing and volatility of a particular stock. Make sure you understand exactly what you're getting into before you use calendar spreads, but used correctly, they can add another element to your overall investing strategy.