Tinder announced this week that it teamed up with Spotify to make users' musical profiles available and to add personal anthems. 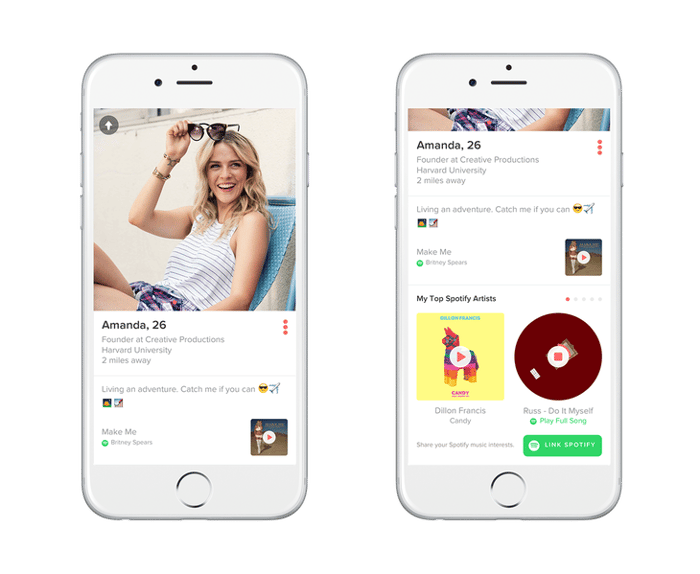 This week Match Group's (MTCH) Tinder, the leading dating app, teamed up with Spotify, the world's most popular music-streaming service. The partnership will allow users to broadcast personal anthems on their profiles, display music clips from their favorite artists, and swipe to see who shares their taste in music.

If both users have Spotify accounts, they'll see the artists they have in common. Musical tastes are a staple of online dating profiles, so it makes sense for Tinder to add Spotify accounts to its own profiles. Spotify won't, however, factor in to the algorithm Tinder uses to select matches, which is based on common interests, mutual friends, and swiping preferences. Rather, it's meant to be a conversation starter, and to help users decide whom to select as matches.

Tinder has already partnered with Facebook and Instagram to provide more information and photos on users, and has also teamed up with Giphy to allow users to send each other GIFs, so a partnership with a music-listening app like Spotify makes sense. And with 40 million members, many of them in Europe, Spotify could help Tinder broaden its reach across the pond.

The partnership may do more for Spotify than Tinder, as it essentially uses Tinder as a platform for Spotify, but it's a solid step forward in making Tinder more appealing to its users. For many young people, musical tastes are a crucial component of their identities and therefore key in finding a romantic match. Tinder CEO Sean Rad said, "Music is an important part of making new connections and getting to know existing ones. Just like you go to the bar that plays your favorite music, you're likely attracted to the people at that bar who enjoy the same music. We want to do the same thing with the Spotify integration."

While I wouldn't expect an immediate bottom-line boost, this should make Tinder's service more attractive, increasing word of mouth and growing its user base over the long term.