These three high-risk/high-reward biotechs have drugs in late-stage trials and key catalysts just around the corner.

Investors who succeed in the small-cap biotech market have learned to temper their expectations. Only a small number of these companies succeed, and the constant chance of a big drop is tough on the stomach lining. But for those who have a high tolerance for risk, the following three small-cap biotechs could be outperfomers in the next six to 18 months. All have major milestones coming over that timeframe, multiple shots on goal, and managements that (thus far) have executed well on timelines.

Despite the hammering biotechs have taken recently, these stocks have held up, probably because all have drugs in late-stage trials that could be successful in highly lucrative markets. 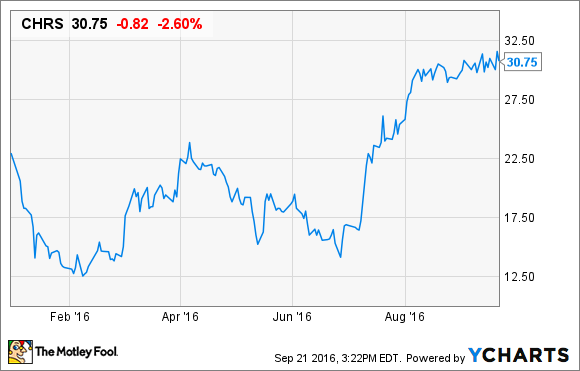 San Francisco-based Coherus Biosciences (CHRS 0.89%) is a good play for those who believe the biosimilar industry should start breaking out in the next 12 months. Coherus' stock has been on the rise since reporting positive data for its biosimilar for Amgen's Neulasta in July. Coherus submitted a biologics license application (BLA) for its Neulasta copycat in August. Since Amgen's drug generated almost $4.8 billion in sales last year, it's reasonable to assume that this biosimilar could achieve at least $1 billion in annual sales.

In another recent Phase 3 trial readout, Coherus' biosimilar CHS-1420 showed similarity to AbbVie's Humira in psoriasis patients. Management anticipates the BLA for CHS-1420 to be accepted by the FDA in the first half of next year.

In addition to two wholly owned assets ready for commercial filings, Shire is a collaborator in a biosimilar for Amgen's Enbrel. Coherus just received a $30 million milestone payment related to the drug's Phase 3 trials. The company has other biosimilars further down its pipeline, including copycats of biologics Avastin and Lucentis. While I don't currently own Coherus, I believe it could achieve some of the earliest biosimilar launches for blockbusters Neulasta and Humira, so I may buy a small position soon.

Lexicon Pharmaceuticals: Leaping ahead in diabetes 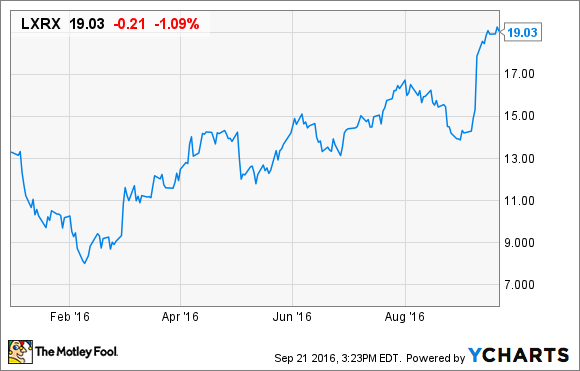 I do own Lexicon Pharmaceuticals (LXRX -2.31%), whose prospects with its next-generation diabetes medication look impressive. The biotech saw its shares jump nearly 19% a few weeks ago when it posted positive results from a late-stage study of Sanofi-backed sotagliflozin. The oral diabetes treatment is a first-in-class combination of an SGLT1 inhibitor with an SGLT2 inhibitor. Peak sales could exceed $2 billion, assuming the drug succeeds in Type 2 diabetes as well as Type 1.

The diabetes market is growing rapidly, which is a boon to Lexicon, but there are other SGLT2 inhibitors commercially available. Those include Johnson & Johnson's Invokana, and Eli Lilly & Co's Jardiance. But none of these products are approved for the treatment of type 1 diabetes. Sotagliflozin could have a strong competitive advantage since it works through multiple pathways, being a dual inhibitor of both SGLT1 and 2.

Phase 3 trials in type 2 diabetes patients are expected to start by the end of the year. Meanwhile, another pivotal phase 3 study is being conducted in type 1 diabetes, with late-stage data anticipated by year end. Lexicon also has a drug under FDA review that treats a condition (carcinoid syndrome) encountered by cancer patients. An FDA decision on that drug, telotristat etiprate, should come in February 2017. 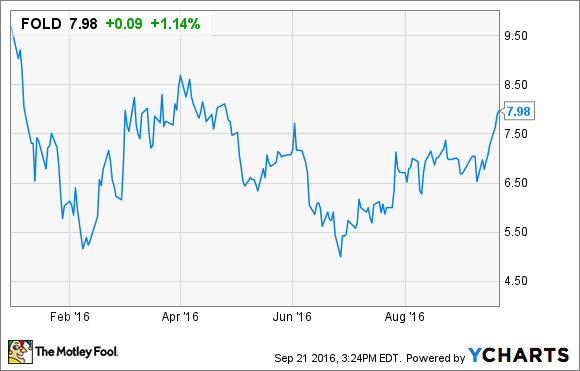 Amicus Therapeutics (FOLD -0.97%) looks set to achieve one of the biggest milestones for any clinical-stage biotech next quarter: Actual product revenue is expected on its 3Q income statement. That will be a big first for this small-cap biotech, which saw GlaxoSmithKline drop out of a partnership back in 2012 and has since bounced all over the place because of delays on drug approvals. But the rare disease company's novel therapy for Fabry disease was EU-approved a few months ago, and ever since, this stock has been clawing back some market respect.

While there are other treatments for Fabry, Amicus' migalastat is dosed in the form of a pill rather than infusion. An update on migalastat's U.S. regulatory pathway is due in Q4. Meanwhile, since the EU approval covers about a third of the addressable market for this rare-disease drug, Europe should provide growth for several years as the drug rolls out in different countries.

Amicus has another catalyst coming: a treatment targeting Epidermolysis Bullosa, with data expected from Phase 3 trials in the first half of 2017. It also has some orphan assets in preclinical research as well as a drug for Pompe Disease in early stage trials. With the $1 billion market capitalized biotech having several shots on goal, as well as near-term catalysts, it looks poised for some gains.

As we all know, markets do not like uncertainty. Some may wish to put off investing in this sector until the dust has settled on the November elections, but that could also take some gains off the table. Whatever happens, the U.S. will not stop being the engine of global pharma and biotech discovery, and for investors who don't mind high risk, these three biotechs have enough big-time upside in their pipelines to make them intriguing candidates for your watchlist.

Why Lexicon Pharmaceuticals Stock Doubled and Then Some on Thursday
366%