The comapny's fuels business is under immense pressure, and there's the debt albatross to consider as well.

After seeing shares decline more than 75% over the past year, some investors might get that dangerous thought in their head that shares of Calumet Specialty Products Partners (CLMT -0.54%) couldn't go any lower from here. Based on the company's financial standing and the challenges of the refining market today, that probably isn't the case. Here are three reasons why shares of Calumet might not recover or, even worse, fall even further.

The trouble with low oil prices

A general rule of thumb is that low crude oil prices are a good thing for refiners because they make their feedstocks cheap. In reality, though, it's more about the spread between crude oil and refined products, and this is the nuanced part of the problem that has dogged shares of Calumet as oil prices have declined.

Even though Calumet has "specialty products" in its name, it still has quite a bit of fuel-refining capacity. Almost all of that fuel-refining capacity is found in the northern Midwest. The following chart shows all of Calumet's operations; the marks in yellow are the company's traditional fuels refineries. 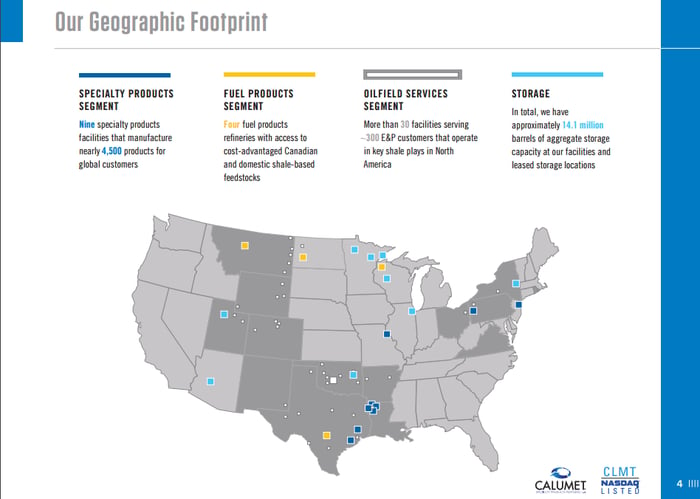 What makes these refineries unique is that they are located close to the Bakken shale region in North Dakota. Typically, Bakken crude sells at a pretty decent discount to other crudes in the U.S. because of the higher transportation costs to get it to refineries on the East and West Coast. So having close proximity to the Bakken means that Calumet should have the advantage of cheaper feedstock than most and should be able to generate higher margins.

The problem with this theory is that it doesn't consider the demand side of the equation. As oil prices have declined, so too has drilling activity in the Bakken region, which was a major driver of diesel fuel demand in the region. Without that diesel demand, prices for fuels have fallen sharply and have really narrowed the price spread between crude and refined products.

This was pretty much why Calumet had to divest itself of its most recent investment, the Dakota Prairie refinery. The facility was specifically designed to manufacture diesel for the Bakken region, but the economics of the project were dependent on robust drilling activity driving demand for high diesel prices in the region. The facility was recently sold to Tesoro (ANDV), which should be able to use economies of scale with its other refinery in the region to make the economics work much better than they have for Calumet.

Most of Calumet's fuels refineries are in a similar situation. While they should benefit from lower feedstock costs, they are all smaller-sized refineries that don't have the great economies of scale necessary for the fixed costs of running a refinery. So if oil prices remain low in the region and diesel demand remains weak in this part of the country, it's hard to see Calumet turning a decent profit on these refineries.

The trouble with RINs

If the refining market of the upper Midwest wasn't challenging enough, there is another major hurdle that refiners in general are facing today: rising RIN costs. RINs -- or Renewable Identification Numbers -- are the standard method of compliance for the U.S. EPA's renewable fuels standards. They were a way to boost the selling price of ethanol to cover the higher costs as the industry got off the ground. If a refiner doesn't manufacture or buy ethanol directly to blend into its products, it has to buy credits from entities that do manufacture the ethanol. In theory, that sounds like a workable model.

The problem is, though, that those RINs can be sold separately from the ethanol attached to them, and it makes for a very opaque, unregulated market that is ripe for speculation and, on occasion, corruption.

This year, the price of RINs has become incredibly expensive for refiners. So high, in fact, that large refiners such as Valero Energy (VLO -0.58%) -- a company with considerable ethanol-producing capacity -- may need to spend $850 million to buy RIN credits in 2016 as the price for RINs increased 32% between June and August.

Companies like Valero and Tesoro have the luxury of offsetting these costs by exporting more of their refined products where those sold volumes don't need to comply to the U.S. renewable fuel standards. Calumet, on the other hand, doesn't have that luxury, because of its refinery locations.

Calumet's fuels segment has already been struggling because of less-than-optimal operations and weakening demand in its major fuels market. RIN costs could make losses in its fuels segment even larger.

The trouble with debt

The two points discussed above are market conditions that could also go the other way, but one thing that is completely on the shoulders of Calumet's management is its incredibly high debt levels that could ultimately sink the company if it isn't addressed.

After going on a massive spending spree starting in 2011, the company's total debt outstanding has grown more than five times, to the point that 44% of its gross profits goes toward interest payments to service that debt. That level of debt simply cannot be sustained over the long term. If the company were profitable today and paying that debt down, it would be one thing, but it's burning through cash and is relying on debt to keep the lights on.

Unless the company's operations see a drastic turnaround, the company could crumble under the weight of this debt load. And that's something that will almost surely wipe out shareholder equity.

Looking at Calumet Specialty Products Partners stock price alone to determine the direction of this company in the future is an investment thesis that will blow up in your face. The risks of its fuels segment dragging the company down either from a weak market in the Midwest or from rising RIN costs are likely to pressure earnings for a while. Then there is the issue with its mountain of debt.

With so much risk involved in these two elements, it's not hard to see that there is plenty of room for Calumet's shares to fall further, and so they're worth avoiding.