Please ensure Javascript is enabled for purposes of website accessibility
Log In Help Join The Motley Fool
Free Article Join Over 1 Million Premium Members And Get More In-Depth Stock Guidance and Research
By Matthew DiLallo – Sep 26, 2016 at 10:00AM

While oil prices seem to have stabilized in the mid-$40s, producers are not sure how much longer that stability will last. That is why investors looking for a long-term oil investment need to strongly consider investing in larger oil companies like ConocoPhillips (COP 5.19%) and BP (BP 3.80%) that are built to handle volatility. That said, while these oil giants have several similar characteristics that make them solid long-term holdings, BP has a couple of things going for it that make it the better buy over ConocoPhillips at the moment.

Because the oil market remains turbulent, it is imperative that investors consider a producer's balance sheet. Here's how these two giants stack up:

Both oil giants boast strong A-rated balance sheets and similar debt levels. BP, though, currently has an enormous cash hoard, which gives it quite a bit of financial flexibility to fund capex, dividends, and legacy legal settlements. Because of that cash balance, BP's net debt is well within its target range. ConocoPhillips' leverage, on the other hand, is a bit higher than the company would like, with it targeting to get its total debt down below $25 billion.

That gives BP a slight edge over ConocoPhillips in this battle.

Drilling down into the portfolios

Next, we will review where these two oil giants derive the bulk of their earnings: 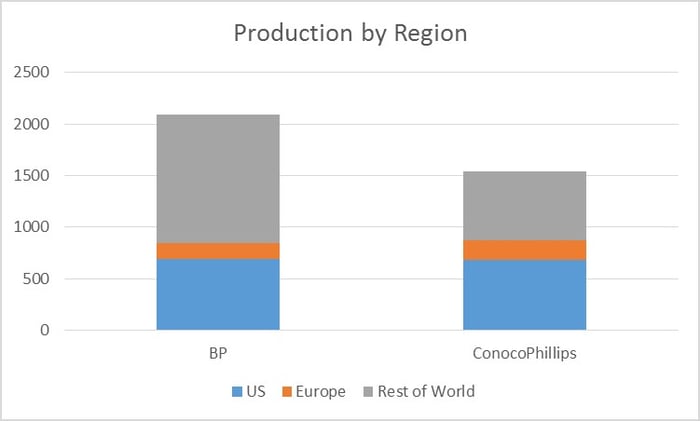 As that chart shows, both companies have significant geographical diversification, though BP does produce more oil and gas outside the U.S. Meanwhile, both produce a balance of oil and gas with liquids accounting for 53% of BP's production and 58% of ConocoPhillips.

Where the two companies differ is in the fact that BP is an integrated company, which means it owns refining and marketing assets. That countercyclical diversification is crucial in the current environment, with BP's downstream assets providing it with more than $1.4 billion in earnings last quarter, more than offsetting the $109 million loss at its upstream operations. Contrast this with ConocoPhillips, which spun off its downstream assets in 2012. As a result, it did not have anything to offset its weak upstream segment, resulting in recording an adjusted loss of $985 million last quarter.

That lack of a downstream business puts ConocoPhillips at a disadvantage right now, making BP the clear winner of this battle.

Finally, we will take a look at the future growth potential of these two oil giants. ConocoPhillips is currently undergoing a transition away from major growth projects, instead focusing on shorter-cycle shale wells instead of long-cycle projects like LNG, deepwater, and oil sands. That shift is intended to reduce risk and provide the company with greater flexibility to ramp investments up or down depending on oil prices. While the company has tremendous upside from its large North American shale position, it does not have a visible long-term growth rate other than an aim to target production growth on a per-share basis.

BP, on the other hand, is in the middle of a rather ambitious growth plan to add 800,000 barrels of oil equivalent per day of new production by 2020. It already has 500,000 of those barrels coming on line by the end of next year. Furthermore, it has a long list of projects that it can sanction over the next 18 months to hit its growth target. Importantly, these projects are not just growth for the sake of growth, but, on average, project to deliver 35% better margins than the company's current base assets.

With built-in growth on the horizon, BP has greater visible upside than ConocoPhillips if oil prices remain low over the long term.

Unlike ConocoPhillips, BP knows exactly where it is going in the future, and it has the plan to get there. When we add in a cash-rich balance sheet and greater diversity of earnings, it makes BP the better oil company to buy right now.