By putting customers above profits, Amazon is crushing the competition and delivering massive gains for investors.

Amazon.com (AMZN -0.03%) is the undisputed leader in online retail, one of the strongest segments in the consumer sector. This competitive strength in a booming industry has allowed Amazon to deliver impressive revenue growth and market-beating returns for shareholders over time: The stock was trading at less than $40 per share 10 years ago, and it's now making new historical highs in the neighborhood of $805 per share.

Market leadership in online retail is a crucial return driver for investors in Amazon, so let's look at how the company is leaving the competition in the dust in its main industry. 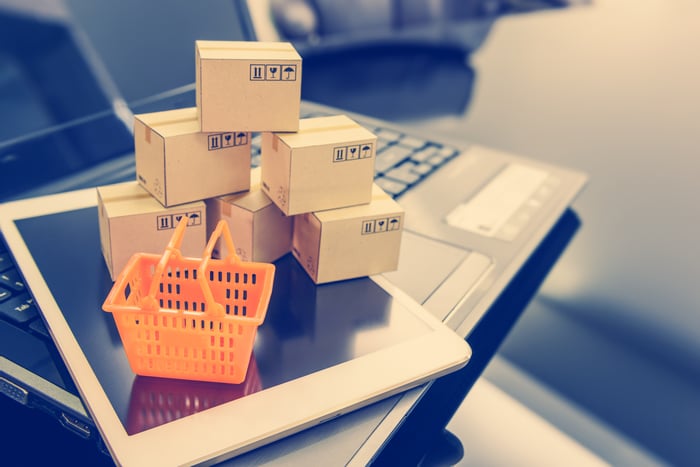 The following chart compares Amazon versus competitors such as eBay (EBAY 1.99%) and Wal-Mart (WMT 2.85%) in terms of stock price performance and revenue growth over the past decade. The image is quite clear: Amazon has obliterated both eBay and Wal-Mart over this period. 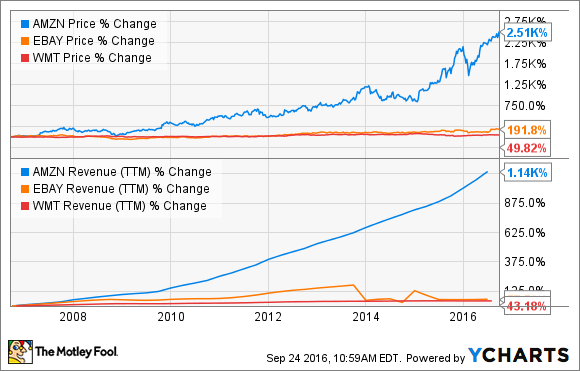 Online commerce is a dynamic industry, and underperforming players are trying to close the gap. eBay is investing in new technologies to provide better information to both buyers and sellers on the platform, as well as optimizing product search capabilities, among other initiatives. As for Wal-Mart, the discount retailer has increased its investments in e-commerce over the past couple of years, having recently acquired online retailer Jet.com for $3.3 billion.

Still, both eBay and Wal-Mart have a long way to go if they want to recover some ground versus Amazon, since the most recent financial reports from the three companies confirm that eBay and Wal-Mart are no match for Amazon at this stage.

It's all about the customer

Amazon's secret for success is deceivingly simple: The company is deeply focused on the customer, always looking for ways to provide a growing variety of products for aggressively low prices, while improving the service in key areas such as delivery time. Unlike the way most other companies operate, management is willing to forego current profits to deliver the best possible customer experience, and most customers consider Amazon far superior to competitors such as eBay or Wal-Mart in online retail.

According to a survey from RBC Capital among 2,024 people, Amazon is downright crushing eBay and Wal-Mart in terms of popularity and customer satisfaction in online retail. Based on this data, 90% of the respondents consider Amazon one of the most commonly used platforms when buying online, while eBay comes in a distant second position with 38%, and only 30% of customers consider Wal-Mart a top destination for online shopping.

Considering three of the most important decision drivers in the industry -- price, selection, and convenience -- Amazon comes well ahead of eBay and Wal-Mart. In terms of pricing, 62% of customers choose Amazon, versus 12% for eBay and 11% for Wal-Mart. Regarding the best selection in the industry, 79% choose Amazon, while eBay is the preferred choice for 9% of respondents, and Wal-Mart gets 4%. Amazon also leads the survey in terms of convenience, with 75% of customers choosing the online retail juggernaut, versus 6% for eBay and another 6% for Wal-Mart.

Back in 2013, Amazon CEO Jeff Bezos, in an interview with 60 Minutes, explained that the company regularly does price elasticity studies, which consistently indicate that Amazon could make more money by raising prices. That means the positive impact from higher prices would more than compensate the decline in sales volume from price increases.

However, Amazon chooses not to implement such strategy, even if doing so means leaving some money on the table in the short term. The main reason to do so is that the company prefers to keep customers as happy as possible, earning and consolidating their trust and loyalty for the long term.

By taking care of customers, Amazon is also taking care of shareholders. The company's commitment to providing the best possible service for a conveniently low cost has produced booming revenue growth over the years, and Amazon investors have been generously rewarded in the process.