The midstream company has just two more projects in the pipeline.

Capital projects are the lifeblood of energy infrastructure companies like Targa Resources (TRGP 0.32%) because they provide incremental cash flow to drive dividend growth. Unfortunately for Targa Resources' investors, there aren't that many projects in the pipeline to drive future growth. In fact, after completing two major projects this year, the company has just two more in the pipeline. That significantly diminishes its future visibility putting it at a disadvantage to other energy infrastructure companies with bigger growth backlogs.

Not much in the pipeline

As the below slide shows, Targa Resources expects to invest up to $525 million this year on growth capex: 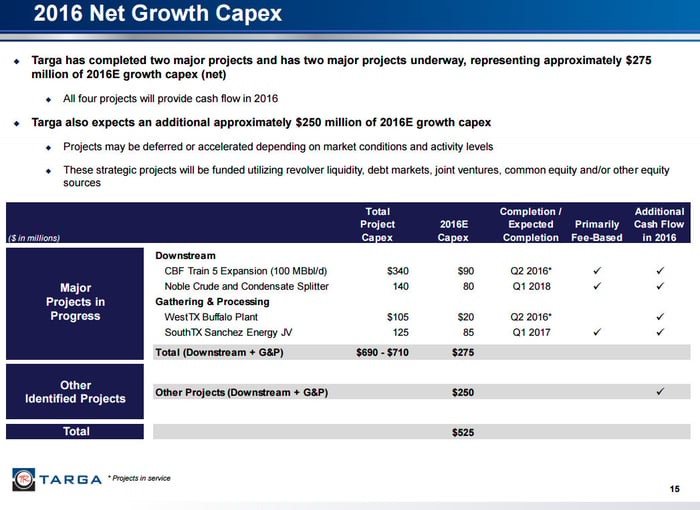 Those investments include $275 million invested in four major projects and up to another $250 million in additional projects. That said, the bulk of that spending went toward the completion of two projects, leaving it with one project to complete in each of the next two years. That is a paltry growth backlog for a company of its size. For perspective, it implies that the $13.4 billion company by enterprise value will only grow its asset base by less than 5% through 2018.

Contrast this with similarly sized MLP MPLX (MPLX -0.06%), which is investing $1.05 billion on growth projects in 2016 alone. Overall, the company has $8.3 billion in organic growth projects through 2020, which represents about $1.5 billion in expansion opportunities per year. Further, it has a substantial runway of potential drop down transactions with its parent company, estimated at $12 billion to $15 billion. Add that to the ability to deploy several billion dollars in synergistic capital on behalf of its parent company and MPLX can invest between $26 billion to $32 billion over the next five years to grow its asset base. That gives MPLX clear visibility to increase its distribution by 12% to 15% this year and by double digits in 2017.

Lots of options and what ifs

While Targa Resources' project backlog is a bit light, it does have several directions to drive growth going forward. In particular, the company has strong gathering and processing positions in the Permian Basin, Bakken, SCOOP/STACK, and Eagle Ford. These are the fastest growing production basins in the country providing the company opportunities to build additional gathering pipelines or natural gas processing plants to support production growth in the future. In addition to that, Targa controls a leading fractionation position in the key NGL hub at Mont Belvieu, Texas, and has the space to add more capacity in the future as NGL supplies increase.

The Permian Basin, in particular, could be a major growth driver because the company has a strong partnership with leading Midland Basin producer Pioneer Natural Resources (PXD 0.14%). That is worth noting because Pioneer Natural Resource recently put out its production growth forecast, which estimates that the company can deliver 15% annual production growth through 2020. That growth will drive demand for additional processing capacity in the future, opening the door for Targa to expand its system.

In addition to organic investments geared toward expanding its current footprint, Targa Resources could look at merger and acquisition transactions to further bolster its asset base. The right deal could deliver a near-term boost as well as long-term expansion opportunities by adding projects to the growth pipeline. M&A, for example, was a significant catalyst for MPLX with its recent acquisition of MarkWest providing the bulk of its organic expansion opportunities.

After completing two major projects this year, Targa Resources growth pipeline is looking a little bare, especially compared to MPLX. That said, the company does have excellent positions in most of the major shale plays, which could drive growth as the oil market rebounds. Further, one strategic M&A transaction could solve its growth problem by refilling its pipeline with opportunities. Still, until these opportunities materialize there are better options out there for investors seeking growth.