Please ensure Javascript is enabled for purposes of website accessibility
Log In Help Join The Motley Fool
Free Article Join Over 1 Million Premium Members And Get More In-Depth Stock Guidance and Research
By Rich Duprey – Sep 27, 2016 at 8:00AM

You know them and love them; maybe now is the time to buy them. 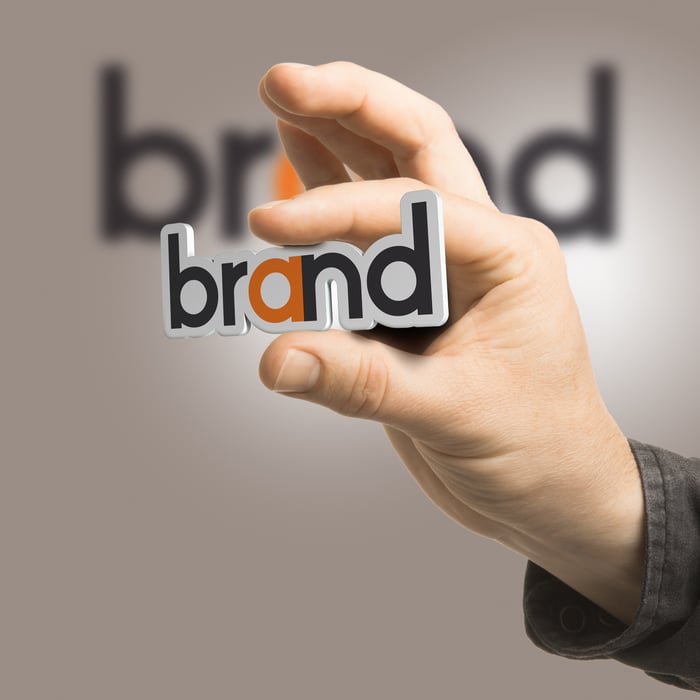 A brand name can make a big difference in consumers' minds, which may give you a big advantage when the stock goes on sale. Image source: Getty Images.

The value of a big brand name comes from filling in the intangible information that's not immediately apparent from the product itself. Buying stocks with strong brand appeal and recognition taps into that same wheelhouse of strength, even if they're not of global caliber. And when those brands go on sale, as they will from time to time, it's often a good opportunity for investors to swoop in and snatch them up. Read on to discover three well-known big brands that are offering investors a good value right now.

Luxury lifestyle brand Coach (TPR -4.17%) has learned the hard way that what's in fashion today can quickly be seen as passe tomorrow. Where once the double-C logo was a status symbol, Coach's fortunes took a big tumble when consumers suddenly decided the ubiquity of the brand, and being walking billboards for the company, no longer held the same cachet.

From style icon to has-been and back again. Image source: The Motley Fool.

It was a wrenching moment for the handbag maker, but one that also served as a catalyst for change. Coach began downplaying its logoed leather goods, much as other retailers like Abercrombie & Fitch, Aeropostale, and American Eagle Outfitters were forced to do. Instead it introduced lines like its new satchel and clutch shapes that complemented its popular saddlebags.

North American comparable-store sales had been on a multiyear slide, but finally turned positive again last month in Coach's fiscal fourth quarter, signaling the company's return to growth. While progressively less bad results had driven shares some 33% higher this year, they've since sold off again, and Coach stock has lost a fifth of its value from the highs it hit in August. A more solid position here and abroad, however, ought to help the handbag maker improve sales and profitability further.

Where Coach aims at affordable luxury, Hanesbrands (HBI -4.50%) is more pedestrian, giving consumers the basics, from socks and T-shirts to bras and panties. Sold under a portfolio of well-known brand names including Hanes, Champion, Playtex, and Bali, Hanesbrands products typically own the top one or two share positions in their respective markets.

Despite the necessity of its offerings, Hanesbrands' stock has been on a long steady slide, and it too sits some 20% below its 52-week high. While Coach's problems were largely the result of fickle consumers -- as well as internal missteps like undercutting its full-price stores with too many discount outlets -- Hanesbrands has experienced weakness due to concerns about a sluggish economy that has taken down many other retailers.

Although unemployment is appreciably lower than it's been lately and incomes have finally moved higher, Hanesbrands stock hasn't been able to avoid a downturn. That represents opportunity, because the undergarments maker operates most of its own manufacturing facilities, and they produce more than 80% of the apparel it sells in the U.S.

Underwear should also be a more resilient business than other areas of fashion. With Hanesbrands' proven ability to integrate acquisitions, as it pays down its debt it should begin to reward investors once more -- maybe even with a higher dividend.

Once the premier toymaker, Mattel (MAT -1.24%) often seems to take a back seat these days to rival Hasbro (HAS -2.81%), which has its fingers in a range of pies, including toys, TV shows, and movies. Mattel even lost Disney's lucrative Frozen and Princess lines to its competitor, but by strengthening its Barbie and American Girl brands, and expanding digital initiatives, Mattel has nearly offset all the lost revenue. 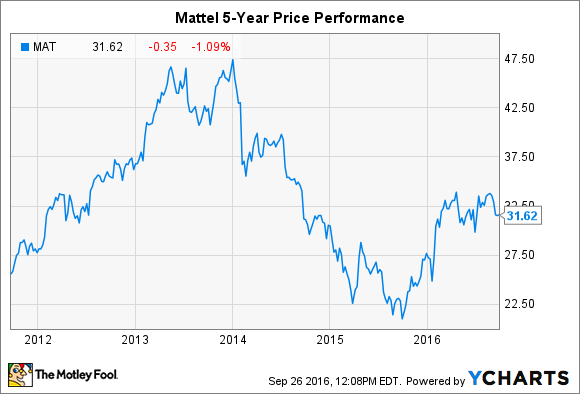 The toymaker doesn't seem to be faring as badly as the others, as shares are only down by about 10% from recent highs. But when you pull back to a somewhat longer time frame, going back to late 2013, you see there is still a lot of ground for Mattel to make up. The good news is that it should be able to do so.

In its second-quarter earnings report, Mattel said Barbie sales were up 24% worldwide and Fisher-Price grew 6%. Even though the American Girl brand still has a lot of work cut out for it, Mattel's new partnership with Toys R Us should help shore up those deficiencies. With additional opportunities overseas, Mattel remains a good long-term investment.

Rich Duprey has no position in any stocks mentioned. The Motley Fool owns shares of and recommends Coach, Hasbro, and Walt Disney. Try any of our Foolish newsletter services free for 30 days. We Fools may not all hold the same opinions, but we all believe that considering a diverse range of insights makes us better investors. The Motley Fool has a disclosure policy.