Investors of Ford Motor Company (NYSE:F) could easily be forgiven for missing some of the automaker's sales data from its three critical markets, China, Europe, and of course, the United States. The three chunks of information get released at different times throughout the month, with varying degrees of promotion through sales calls and in-depth press releases.

But, fear not! Here are the highlights for three of Ford's critical markets last month, all in one handy place.

A mixed bag in Europe

Even as the negative impact from the U.K.'s Brexit vote won't be entirely felt for a while -- likely beginning in 2017, when the U.K. officially begins the departure proceedings -- Ford's market share has still been unimpressive. Ford's sales in its Euro 20 reached 74,800 last month, its highest August sales figure since 2007, yet its market share declined 30 basis points.

The story is similar for year-to-date figures that show Ford's 898,000 units sold in Euro 20 is the best since 2009, for the same comparable time frames, but its market share moved 10 basis points lower to 7.9%.

On the bright side, despite losing a slim amount of market share, Ford's higher-margin vehicles are selling well. Ford sold 122,700 SUVs during the first eight months of 2016, which was a strong 39% gain over the prior year. Looking specifically at August, Ford's SUV sales jumped 71% compared to the prior year. Sales of Ford's premium Titanium trim accounted for a healthy 41% of car sales last month, and when you include other models such as the Mondeo Vignale, Fiesta, and Focus ST and Red/Black Editions, that percentage jumps to nearly 60%.

Again, it was a mixed bag in Europe. Ford's profitability in the region has improved dramatically in recent years as the company's operations continued to lean out and the sales mix favored premium trims and SUVs, although its market share is currently treading water. The major thing to watch going forward is how sales and profitability are affected by the U.K.'s Brexit decision.

Ford turned in seemingly strong sales in China last month -- its best-ever August, in fact. Ford and its joint ventures recorded 96,450 sales in August, a 22% increase over the prior August. But, it's important for investors to have long-term context. Ford's 22% sales gain last month might look more impressive than it really is when you remember that China's automotive industry stalled last summer, making for easier comparisons this year. 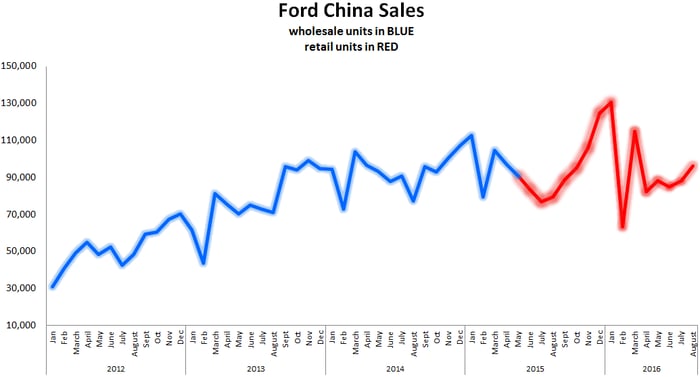 The spike in sales following last year's summer was due to the Chinese government cutting the purchase tax on vehicles in half, spurring sales. Since then, the market has since leveled off a bit, with the tax incentive planned to end when the calendar flips to 2017. Looking at Ford's year-to-date results in China, the company, and its joint ventures have tallied nearly 750,000 vehicles -- an 8% increase compared to the prior year.

"Reaching 1 million sales so quickly is a testament to the growing strength of our brand and products in Asia," said Dave Schoch, president, Ford Asia Pacific, in a press release. "Even with intense competition and challenging business conditions, Ford continues to grow and reach new customers in Asia Pacific."

Switching gears to Ford's primary profit driver, the United States, investors knew it was going to be a tough month for the industry as it faced a strong year-ago comparison. That might take a little of the sting off, but Ford's 8.4% decline in the U.S. market gave investors few reasons to cheer. Breaking it down a bit further, Lincoln managed to post a 7% gain during August, which only slightly offset Ford's namesake brand decline of 9%.

At first glance, Ford's SUV segment sales decline of 2% and the trucks segment posting a similar 1.6% decline was disappointing, but those results look phenomenal compared to Ford's cars, which logged a 26.5% plunge in August. In fact, excluding the small-volume Police Interceptor Sedan, each of Ford's car models recorded a double-digit decline ranging from a 16% decline to a 32% plunge.

Like we said, it was going to be a rough comparison. That's because last year's August had a fifth weekend, and with much of the traffic and sales happening on weekends, that puts this year's August at a significant disadvantage. Another factor to consider is that Ford noted many times this year that fleet sales would taper off during the back half of 2016, which makes total sales comparisons more difficult to match.

Even as sales grow in Europe and China, albeit a bit slower than investors would like, and sales in the U.S. remain at highly profitable levels, the third quarter is still shaking up to be a rough one for Ford investors. That's because earlier this month, it announced it would be required to expand on a recall -- bringing the total to 2.3 million vehicles -- and that costs would hit in the third quarter. That's in addition to the costs of Ford's Super Duty launch also hitting during the third quarter. As a shareholder, it's difficult to be optimistic heading into next month's earnings call, but on the bright side, all of the pessimism seems priced into the auto stock already.