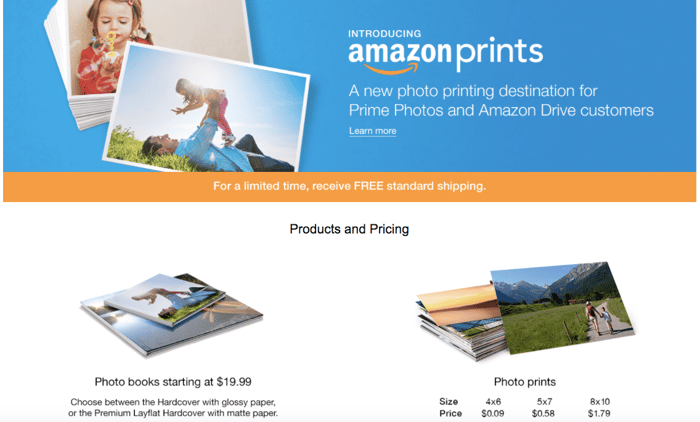 Amazon.com (NASDAQ:AMZN) is getting into the photo finishing and photo books businesses, and that's bad news for Shutterfly (NASDAQ:SFLY). Shares of Shutterfly plunged 12% last week, following the unveiling of Amazon Prints. A couple of bullish analysts may have rushed to Shutterfly's defense, but it's still a problematic development for the pioneer in online photo products.

When Amazon enters a niche, it's with the grace of a swashbuckler with a blade in his mouth. It's not pretty, but it's swift and means business. Blood will be spilled. It's hard to see how this does not sting Shutterfly's business.

Amazon Prints offers photo books starting at $19.99 and photo prints for as little as $0.09 apiece. Stationery and calendar products are coming soon. Amazon is offering free standard shipping for a limited time. If you're Shutterfly right now, this is when you start quaking in your booties.

Some analysts aren't concerned, and they're even eyeing last week's sell-off as a buying opportunity. Cantor analyst Youssef Squali issued a bullish note last Thursday following the stock's hit. He feels that Shutterfly's scale in this market and established brand give it an edge here. There's also the high switching costs since customers often have several photos already uploaded to Shutterfly's server. He feels Amazon Prints will have a limited impact in the short run. He's sticking with his $55 price target, a move that suggests 25% of upside off os yesterday's close.

RBC Capital's Andrew Bruckner chimed in a day later, arguing that Amazon Prints is not a long-term threat. He feels that the breadth of Amazon's offerings can't match the various products and sizes available through Shutterfly. The analyst also feels that Shutterfly's entrenched mobile app gives it a smartphone advantage. Bruckner has a $57 price target on the stock.

The bullish sentiment is welcome news for beaten-down Shutterfly investors, but it's also never a good idea to underestimate a serial disruptor like Amazon. The e-tail juggernaut has fallen short before. It had to bow out of smartphones, high-end diapers, Endless.com, WebPay, and more. It doesn't always get it right. However, if folks are still ordering prints and having photo books made, it's a safe bet that Amazon will be willing to dismiss positive margins in the near term to make a difference in the long run.

If Amazon Prints gains tractions, it will quickly ramp up its offerings. It's not a Shutterfly killer in its present state, but it's a fast learner in the fine art of disruption.