Oil prices posted fell on Tuesday to give up all of the prior day's gains, which made United States Oil (NYSEMKT:USO) a top declining exchange traded fund. Meanwhile, iShares MSCI Emerging Market (NYSEMKT:EEM) ticked up by 1% to reach a 15% gain so far for the year after Asian indexes rallied overnight.

As for individual stocks, Caesars Entertainment (NASDAQ:CZR) and GoPro (NASDAQ:GPRO) each logged notable declines on Tuesday that bucked the market's overall uptrend.

Caesars Entertainment takes a step back from bankrupcy

Caesars Entertainment fell by 19% on Tuesday after the casino operator announced details regarding the latest twist in its bankruptcy negotiations. On the positive side, Caesars believes it has reached a tentative deal with creditors that will save the company from liquidation. The discussions have yielded a "pathway to consensual confirmation and completion of reorganization," the company explained in a press release. However, the proposed restructured entity will be majority owned by those creditors, with existing public shareholders only claiming 6% of the company that emerges. 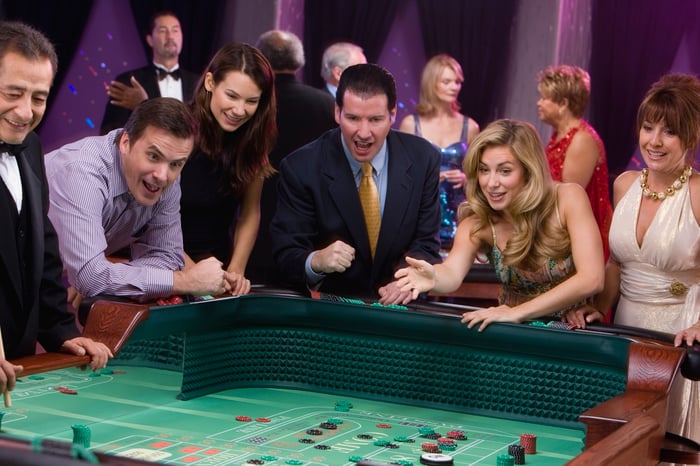 It's also unclear at this point whether the new terms will be agreed to by all the relevant parties. Caesars said in a press release that it has received support from its major creditor groups for the broad terms of the deal, but it still needs these parties to vote to confirm the detailed plan so the bankruptcy court proceedings can move closer to conclusion.

Other potential snags along the way include confirmation from the court itself, along with regulatory approval, and debt covenants that should make this process continue well into 2017. Given that Caesars Entertainment shareholders aren't likely to be left with much of an ownership stake after enduring that uncertainty, investors shouldn't look at Tuesday's drop as a good reason to buy into the stock.

GoPro shares fell slightly in heavy trading on news that its recently unveiled Karma drone product will be facing serious competition this holiday season. Rival DJI on Tuesday launched its latest entry in the market, a small drone called the Mavic Pro.

The device boasts many of the same features Karma does, including a compact, foldable frame, image-stabilizing hardware, and accessibility features like self-landing. Mavic Pro is priced at $1,000, making it comparable to Karma once you factor in the cost of buying its camera separately. In an interesting competitive twist, DJI's drone can be ordered through Apple and will be available at the tech giant's network of retail stores in time for the holiday season shopping rush.

Many of GoPro's cameras already find themselves attached to drones, and with Karma, the company hopes it can capitalize on that demand by selling its own hardware. The prize for leadership in this industry could be huge. In fact, one estimate has consumer drones growing into a $4 billion niche by 2024.

But Tuesday's news highlights the risks that GoPro faces this year in standing out from a crowded competitive landscape as it aims to translate its valuable camera brand into a leadership position in the drone industry.