A disappointing investment project, rising capital costs, and a quicker decline in national fuel consumption could all weigh on Magellan's stock in the future.

You will be hard-pressed to find an investment in the energy industry that has produced the returns Magellan Midstream Partners (MMP -0.95%) has since its initial public offering in 2001. The company's solid business model and a management team that has focused intently on being good stewards of shareholder capital have translated into an investment that has beaten the S&P 500 by more than 20 times on a total return basis. 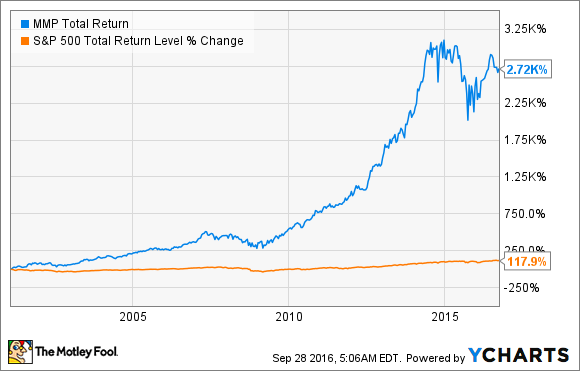 As with everything in investing, though, there are no guarantees that the company will be able to keep these returns going. So let's take a look at three big risks it will face in the coming years that could take a big bite out of that stellar performance.

Its "next big thing" falls through

It's not that often that Magellan Midstream Partners makes huge investment bets. Most of the projects it approves are typically smaller or modest-sized investments, and the ones that are larger investments -- its major crude oil pipelines, for example -- are de-risked by bringing in a partner or two to share the financial load of getting these projects off the ground.

This is what makes Magellan's Pasadena Marine Terminal in Texas so interesting. The Pasadena terminal will look to export refined products and ethanol and have up to 1 million barrels of storage for these products. This is a project that Magellan estimates will, if all expansion options are exercised, will cost upwards of $1 billion. Compared to larger master limited partnerships, this is a medium to large project. For Magellan, though, it is equal to every other project that is currently under construction.

What should be of concern for Magellan investors is that this project is expected to be completed in stages. The first is a $335 million investment that should be completed by 2019. However, this initial phase does some of the heavy lifting for further development such as land acquisition. As such, the company is anticipating that this project should generate a 12 times EBITDA multiple, which is much higher than the 7.1 times average EBITDA multiple that the company's other projects are expected to generate.

Management expects that, as the other phases are completed, it will lower the overall EBITDA multiple on the project to a much more attractive eight times. That is contingent, however, on those expansion options being picked up. A lot can happen between now and 2019 that could change the landscape. If things were to change for the worse and the company didn't go froward with the expansion, then Magellan could be left with a still-large-for-its-size asset that generates lower returns.

Whenever a company makes investment projections like Magellan has done with the project above, it is predicated on being able to raise capital at a certain rate. This is an incredibly important aspect of investing in master limited partnerships: their ability to access copious amounts of cheap capital.

I'm not going to go into the speculation over interest rates and where they are headed. When you look at the borrowing rates of companies, it is much more based on their overall creditworthiness than the interest rate environment in which it is borrowing. For Magellan, that works in its favor because it has an investment-grade credit rating -- BBB+ from Standard & Poor's -- and has kept a much more modest balance sheet over the years. You can even look to its most recent $500 million bond issuance with a 4.92% interest rate -- used to pay down borrowings that carried a 5.65% interest rate -- as evidence of its strong credit profile.

This spending push over the past two years, though, has started to push its leverage ratings higher, and the suite of projects it has in the wings will likely require even more borrowing. If the company bites off more debt than it can chew for these new projects, it could raise interest rates on its debt. That would, in turn, impact the returns generated by existing projects and fewer future projects will be able to meet target returns. That's something that no shareholder wants.

Magellan's largest business is moving refined petroleum products -- think gasoline and diesel -- from refineries in the Gulf Coast and Mid-Continent region to retail and wholesale distribution points across a large swath of the lower 48 states.

This makes for a very steady cash-generating business. Unlike crude oil or natural gas where production can boom and bust or shift geographically, refined product demand remains pretty steady and the volumes that move through Magellan's pipes pay a fixed fee rather than a percentage of the commodity price. In fact, much of that refined product system is in parts of the country where it is the only game in town, and therefore prices are regulated like a utility by the Federal Energy Regulatory Commission such that Magellan has a guaranteed rate of return.

Much of those returns and fixed fees are profitable because those pipes run at high utilization rates. With the costs for those pipes mostly fixed, a drop in volume would drastically lower those rates of return. It's clear that there are signs we are moving toward a time of less fuel consumption, but they are slow-moving trends. As recently as a couple years ago, Magellan was estimating 1% or less annual declines in its pipeline volumes from lower consumption.

But what if that demand for gasoline and diesel were to change quicker than anticipated? There are a lot of things that would need to go right for this to happen -- rapid adoption of electric vehicles and more efficient driving from automated vehicles, to name two -- but there are enough factors working to lower fuel consumption that they cannot be denied.

Clearly, this is still a longer-term threat for Magellan that still has some questions up in the air, but it is a threat nonetheless. If consumers take to electric vehicles or if automated driving becomes ubiquitous faster than our current track, we could see a rapid slump in fuel use and Magellan's pipeline network won't be as valuable as it has been.

Looking over the nearer term, there aren't a whole lot of things that could knock Magellan off its tracks. The company still has a reliable revenue stream, a solid financial foundation, and a decent slew of projects coming on line in the next year or two to fuel growth. Longer term, though, investors should be on the lookout for a misplaced bet on its Pasadena Terminal, the threat of higher capital costs, and a faster-than-predicted shift away from fossil fuels for transportation. If it does announce the expansion of Pasadena and can keep its finances in check while it gets through this spending push, then it may be able to hold off the inevitable declines in fuel consumption for a while.

Tyler Crowe owns shares of Magellan Midstream Partners. You can follow Tyler at Fool.com or on Twitter @TylerCroweFool.