Frontier Communications (OTC:FTR) has been working hard to transform from a small regional player to a mid-size cable and internet force.

The problem is that even after spending $10.54 billion to buy Verizon's (NYSE:VZ) wireline systems in California, Texas, and Florida Frontier may lack the heft to compete. This is a case where the company may be too big to be small and too small to be big. That may doom Frontier to being an alternative choice to better-funded rivals with more to offer consumers.

Frontier has tried to become a player and it has attempted to make its stock attractive by paying a dividend, but ultimately the underlying business may not support its long-term growth. There are business reasons to sell Frontier as well as more emotional ones. Ultimately however these are all things that could keep the company from growing its share price going forward. 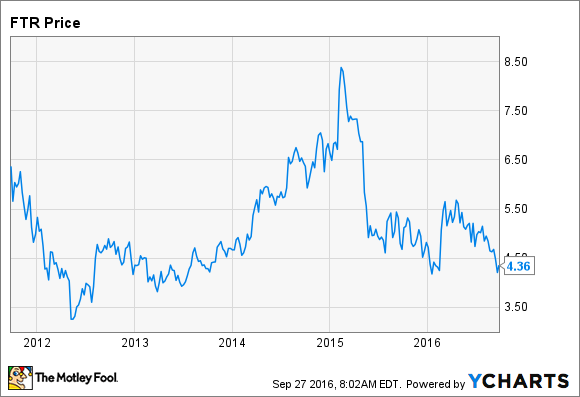 Frontier's stock price has been going in the wrong direction. Image source: YCharts.com.

While there's nothing wrong with Frontier's Vantage platform, there's also nothing especially right about it. The challenge for the company, as a smaller player in the internet and cable space, is being able to keep up with bigger rivals.

Vantage, its cable platform, is sort of a me-too version of what bigger rivals like Comcast (NASDAQ:CMCSA) already had for years. The Frontier platform, for example, lacks voice control -- something which Comcast offers. That may not be a feature consumers care about, but as a secondary player in all its markets, Frontier needs to do things to attract consumers. Better technology would be a way to do that, but the company lacks the research and development budgets of its competitors.

Frontier may have good enough technology, but that's probably not enough to get consumers to switch from an established player.

It's not going to be the only number two

For the past few years Frontier has had a pretty simple business model. It comes into a market which had one cable and internet provider and offered an alternative. It made that alternative attractive by offering compelling pricing and the company gained customers simply by being an alternative.

That's not a bad system. People tend to build up animosity toward big internet service providers (ISPs) and cable companies like Comcast, so simply not being them is a business model. Going forward however new technologies have already made the cable market bigger than a two-company race. Consumers can cut the cord for streaming services including ones which offer most cable channels or they can opt for satellite.

Of course, those choices do not offer internet, but alternative ISPs are coming (or have arrived) as well. Going forward a number of technology companies are working on alternative methods for delivering broadband internet. That could mean everything from internet-delivery blimps, to fiber networks, to service over power lines. However it happens, it's coming, and that makes Frontier one choice out of many rather than a clear alternative to one defined market leader.

As an alternative to bigger players, you would expect Frontier to be a leader in offering alternative choices. In the current market that means letting people skip the traditional cable bundle and opt for more choice. These so-called skinny bundles let people pick and choose what channels they want allowing them to not pay for things they do not use.

Big players like Comcast are testing skinny bundles in select markets (like on college campuses) while DISH Network (NASDAQ:DISH) has both its Sling TV streaming skinny bundles as well as its new Flex Pack offer, which lets consumers pick and choose channel packs.

Consumers clearly want choice and if Frontier hopes to position itself as an alternative to bigger rivals, it should be offering choices those companies do not. Instead Frontier has stayed married to the traditional model.

Frontier's business model makes little sense if its goal is to compete with companies like Comcast. It makes a lot more sense if its actual purpose is to be acquired.

In a consolidating media world Frontier has become one of the bigger prizes available. As part of a larger company Frontier's lack of innovation and it not offering creative channel packages would not be a liability. As part of something bigger, Frontier brings an attractive user base which may actually become more loyal if an acquirer improved their technology and channel choices.

Frontier may very well be building itself in order to sell and if that's the case, it should fetch a premium for shareholders. Consolidation has removed most mid-size and smaller players from the board already, making Frontier an attractive target for any company looking for quick growth.