Procter & Gamble (PG 0.91%) is flush with cash thanks to a portfolio reboot that's involved selling off a few valuable brands, including Duracell batteries and Coty beauty products. Yet weak operating trends have produced two consecutive years of disappointing dividend raises for income investors. The consumer products giant boosted its payout by 3% last year and by just 1% in 2016.

Here's how the dividends stack up against each other.

Target for the yield

Target's stock is out of favor right now in part due to a slowdown in the retailing industry. Yet the company has stumbled enough to separate itself from peers -- and not in a good way. Customer traffic dropped last quarter, even as Wal-Mart's rose. And Target's comparable-store sales are negative at the same time that grocery competitor Kroger has pushed its growth streak past 50 straight quarters.

Investors have punished the stock for those missteps: Target is now valued at less than 13 times earnings, compared to a price-to-earnings ratio of 15 for both Kroger and Wal-Mart. Investors who believe the retailer will recover from this recent slump, as it has many times in its near 50-year history, might be enticed by that discount -- especially considering that Target boasts a market-beating 3.5% dividend yield, a low payout ratio, and a strong track record for recent dividend increases.

Coca-Cola for the profits

Like P&G, Coca-Cola is making a major structural change that it hopes will produce a leaner, more profitable, and faster-growing enterprise. Rather than sell off parts of its portfolio, though, the beverage giant is refranchising a large portion of its bottlers.

Coke is aiming to produce a turnaround in the disappointing operating trends that drove volume growth of just 1% through the first two quarters of 2016. CEO Muhtar Kent and his team have identified several levers that the company can pull to achieve that goal, including focusing on emerging markets like China and India while investing heavily in non-soda brands like waters and juices. Its hefty dividend, meanwhile, should continue climbing at a steady pace as the refranchising initiative boosts profitability.

Johnson & Johnson may not pay as meaty a yield as P&G right now (2.7% vs. 3%), but that's partly because the stock is up so sharply. Shares have more than doubled over the last five years including dividend reinvestments, compared to a market-lagging 71% rise for P&G. 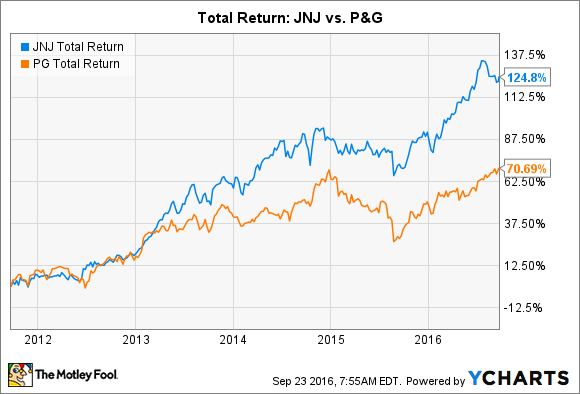 Its dividend growth rate is impressive, too: J&J's payout has improved at a 7% compound annual rate over the last five years and by nearly 9% over the past decade.

Yet one of the best reasons to like J&J over Procter & Gamble is that, while both companies admit that innovation is critical to their entire business model, only one has demonstrated consistent success at it. Johnson & Johnson dedicates $9 billion to research and development each year and investors see the fruits of that spending: Roughly 25% of sales last year came from products that J&J introduced in just the past five years. In contrast, P&G hasn't launched a new $1 billion product in over a decade.

Procter & Gamble pays one of the most dependable dividends on the market, raising it for 60 consecutive years. As impressive as that streak is, however, the latest hike was for less than $0.01 per share. Income investors have plenty of options for stronger dividend growth than that.

Demitrios Kalogeropoulos has no position in any stocks mentioned. The Motley Fool recommends Coca-Cola, Johnson and Johnson, and Procter and Gamble. We Fools may not all hold the same opinions, but we all believe that considering a diverse range of insights makes us better investors. The Motley Fool has a disclosure policy.