It's not about what goes wrong -- it's about how you bounce back from it.

American Express (AXP -0.43%) has certainly faced some challenges lately, from stricter regulations to greater competition from other card issuers to foreign exchange headwinds. Even with all of that, the worst challenge American Express has faced in recent history has to be the loss of its Costco co-branded relationship. However, I think the company is doing what it should be doing: moving on and aggressively pursuing other opportunities.

American Express lost several of its co-branding deals in the past year or so, including Fidelity, JetBlue, and most significantly, Costco, which made up 8% of AmEx's total card spending last year. In addition, foreign exchange headwinds weighed on earnings, and the competition in the credit card industry is as fierce as it's ever been.

AmEx seems to be moving on nicely

While it will take some time to replace the lost revenue from Costco, things look promising so far.

For one thing, AmEx has been aggressively pursuing ways to add new business, such as its recent deal with Sam's Club to start accepting the company's cards. And hearing merchants say "Sorry, we don't take American Express" may soon be a thing of the past, as the company has been actively trying to increase the number of merchants where its cards are accepted. In fact, American Express aims to be as universally accepted as Visa and MasterCard by 2019.

Partnerships with Uber and Airbnb are also likely to add revenue as those companies continue to grow. The company has significantly increased its marketing and promotions spending this year in order to adapt to the ultra-competitive environment, and it appears to be working with 3 million new cards worldwide.

For the most part, American Express' second-quarter earnings looked pretty good, with revenue down just 1% year over year, and a $1.1 billion windfall from the sale of the Costco portfolio. Billed business was up 3% year over year to $269.3 billion, but was actually up 8% when you exclude the effects of the lost Costco business, so this looks pretty strong. In its press release, American Express mentioned especially strong performance in its Platinum, Gold, and Delta card portfolios. CEO Kenneth Chenault praised the company's progress on its growth initiatives, while at the same time maintaining strong credit quality.

When adjusting for the loss of the Costco and other former co-branding relationships, American Express is showing nice growth in its loan portfolio. Image source: American Express.

In addition to the growth plans, American Express also intends to reduce expenses by $1 billion per year by the end of 2017. 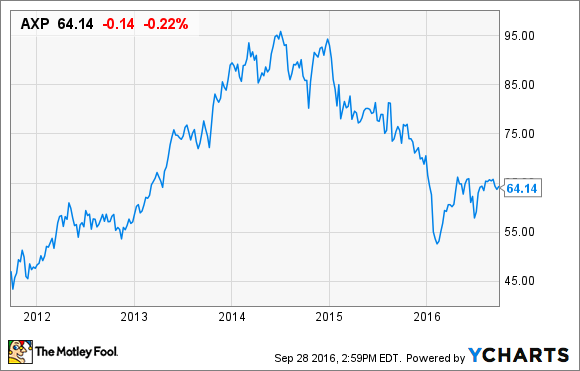 The company's capital plan was approved this year, and AmEx's board recently announced plans to buy back an additional $3.3 billion worth of shares over the next 12 months and increase the dividend by 10%. And, as my Foolish colleague Chuck Saletta recently wrote, it's reasonable to expect another dividend hike in 2017.

A bright future ahead

American Express has some key competitive advantages, such as an extremely strong brand name, an affluent cardholder base, and a widespread closed-loop payment network. While the end of its Costco relationship is a setback, it's a temporary one, and it looks like AmEx will make up the difference by increasing its other revenue and trimming expenses in less time than many experts thought.

This is certainly a big win for American Express shareholders, who are already up by more than 25% from February 2016 lows.

Why Did Rapper Jack Harlow Get a Shoutout on AmEx's Recent Earnings Call?
376%