The offshore drilling stocks are moving up along with the price of crude.

Crude oil spiked in late afternoon trading on Wednesday, closing up nearly 6% on reports that OPEC has reached an agreement to limit crude production. Those soaring prices sent offshore drillers Atwood Oceanics (ATW) and Seadrill (SDRL) up double digits by the late afternoon. 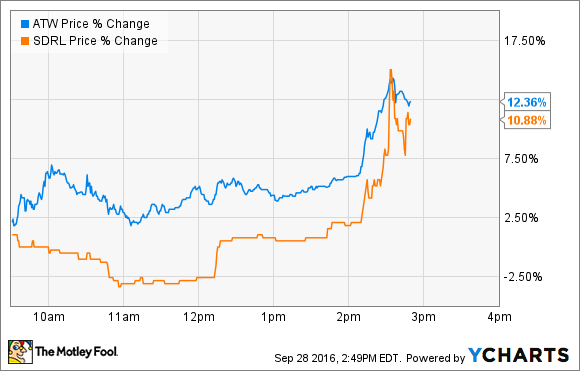 According to the report by Reuters, OPEC has agreed to reduce its output to 32.5 million barrels per day. That is down from its current production of 33.24 million barrels per day. That said, OPEC might not release the full details of its plan until its next scheduled meeting in November. Further, the report went on to say that OPEC would reach out to non-OPEC producers such as Russia for cooperation in a coordinated effort to stabilize the oil market once it achieves its production targets.

If this agreement does go into effect, it could finally not only stabilize the price of crude but put a floor under its price. That could give oil companies the confidence they need to firm up plans to ramp up offshore drilling activities. The potential ramp up of activities is what's driving the stock prices of Atwood Oceanics and Seadrill, which both have idle drilling rigs that they want to put back to work.

After months of inaction, OPEC finally seems ready to intervene in the oil market. Because of that, it could more quickly put an end to the market's current glut, allowing producers to make investments into future oil supplies to offset what has been two years of significant underinvestment by the industry. That said, it could still be quite a while before the offshore drilling market starts showing signs of life, which is what Atwood and Seadrill really need to see.