The leading independent oil and gas company isn’t getting the credit it deserves for several smart moves.

ConocoPhillips' (COP -1.27%) investors are enduring another year of poor performance, with the stock significantly underperforming the market so far: 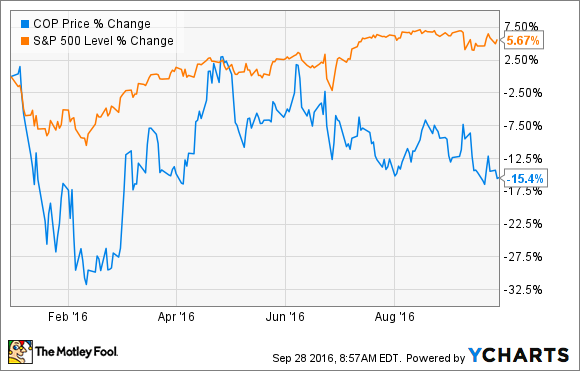 That underperformance is coming despite the fact that the company made several smart moves this year, which could pay big dividends down the road. Here are the three best thus far.

When ConocoPhillips put out its initial budget for 2016, the company expected to spend $7.7 billion on capex to grow production by 1% to 3%, adjusted for expected asset sales. However, through a combination of cost-saving initiatives, better-than-expected productivity, and a focus on development spending, the company has reduced its budget to just $5.5 billion. Despite the significant spending cut, the company expects production to be ahead of its initial estimates for the full year.

The market is overlooking ConocoPhillips' ability to deliver more production for less money. It's a game-changer for the company because it will enable the oil giant to earn much higher margins in the future as oil prices improve.

The oil market downturn forced ConocoPhillips to reevaluate its long-term plans. One of the results of that evaluation is that the company realized it did not see high enough returns from its deepwater exploration efforts to compensate it for the risks, evidenced by the string of dry holes it drilled in in recent years. In fact, earlier this month, ConocoPhillips and partners Suncor Energy (SU -0.60%) and Royal Dutch Shell (RDS.A) (RDS.B) announced that their first exploration well in the Shelburne Basin offshore Nova Scotia came up dry. Canadian oil giant Suncor Energy noted that this dry hole would result in it writing off its 20% share of the costs, estimated to be $105 million. ConocoPhillips' write-off will likely be even higher given its 30% stake in the Shell-led exploration program. Because of these risks of drilling a dry hole and the increased costs associated with offshore drilling, the company opted to exit the program in phases.

It completed its first phase earlier this year when it announced the sale of its exploration blocks offshore Senegal for $350 million. Despite the oil market downturn, ConocoPhillips received a pretty decent value for the blocks, given that the carrying value of the asset was $250 million. Further, the sale provided the company with some incremental cash that it could use for other purposes.

Starting to pay down debt

The company should be able to reduce debt further by the end of the year because it has additional asset sales under way, with a target to sell $1 billion in assets by year end. With $4.2 billion of cash on hand, any further improvement in cash flows via a combination of rising oil prices and falling costs could potentially give the company the confidence to use some of its cash to get its total debt back down below $25 billion.

ConocoPhillips had three goals to start the year:

By finding addition capex cuts, selling its Senegal assets, and paying down debt, the company made solid progress on all three goals. While ConocoPhillips still has work to do, it's in a much better position than it was to start the year.