The video game retailer's decline will happen slowly at first, then all at once.

On the surface, video game retailer Gamestop (GME -2.24%) looks like a screaming bargain. The stock trades for a bit more than 7 times earnings while sporting a dividend yield in excess of 5%, and the company expects to grow its per-share earnings this year. Same-store sales have been in decline recently, but growth in the company's non-physical gaming businesses has helped to drive revenue and earnings higher.

The fact that gaming is increasingly going digital isn't a new concern. PC gaming went digital years ago, with 92% of PC game sales in 2013 coming from downloads, with that percentage almost certainly higher today. The console gaming market hasn't moved as quickly, a fact that has helped Gamestop remain relevant. The company is diversifying away from physical games as it prepares for the continuing shift to downloads, but it's still highly dependent on selling discs. 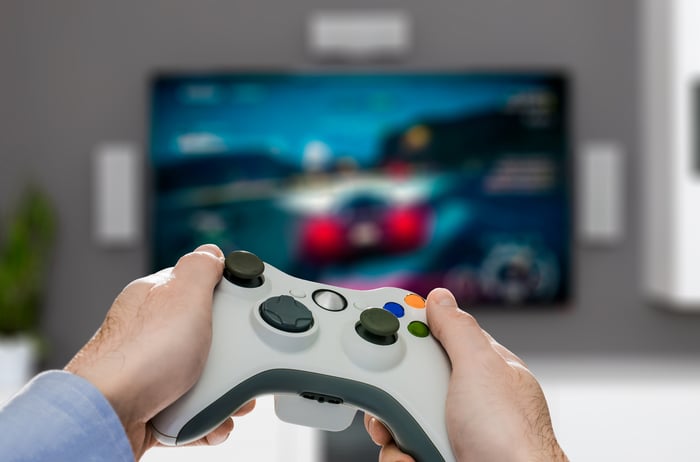 The bull argument for Gamestop is that the decline in physical game sales will be slow enough for the company to complete its diversification strategy without any kind of major negative impact. I disagree. Gamestop will be perfectly fine in the short term, but its decline will happen quickly once game consoles stop supporting physical discs.

The inevitable shift to digital

During fiscal 2015, Gamestop generated nearly $5.3 billion of revenue from the sale of new and used games, about 56% of total revenue. Gamestop has diversified into other areas, including digital game sales and consumer electronics, but physical games still account for the bulk of revenue.

Gamestop's used game business carried a gross margin of 46.9% in 2015, nearly twice that of the new game business. Combined, sales of new and used physical games accounted for 62% of the company's total gross profit.

I don't think it's even a question that game consoles will eventually dump physical discs entirely. When that happens, the new game business for Gamestop will disappear quickly. The used game business will stick around longer, as there will still be demand for games for older generations of consoles, but Gamestop's used game revenue will still plummet.

For games that were released recently, Gamestop is able to charge close to retail price for used copies. Looking at the company's website, used copies of PS4 games like Uncharted 4, GTA V, and Madden NFL 17 sell for $52.99, just $7 below the full retail price. From the perspective of the customer, a small discount is better than no discount at all. But once there are no more recently released games on disc, Gamestop's ability to charge such high prices for used games goes away. Even if the used game market persists for years, used game revenue will still tumble as the average selling price drops.

Gamestop operates over 7,000 stores, most of which sell new and used games. Operating those stores profitably in the event that the new game market disappears and the used game market contracts will likely become impossible. The company could transition those stores to selling other products, like consumer electronics or mobile devices. But those are tough, competitive businesses where Gamestop will enjoy no competitive advantage.

I think Gamestop's transition away from physical games is going to be a lot messier than those who are bullish on the stock assume. The company's ability to charge near-retail prices for used games suggests it has a competitive advantage in the used-game industry. Once that advantage is stripped away, Gamestop will be just another retailer.

As a value investor, my favorite kind of stock is one that's been beaten down by rampant pessimism. Gamestop certainly fits the mold, but I have zero confidence that the company will be able to maintain its current level of earnings in the long run. That makes the low PE ratio largely irrelevant -- and the stock more likely to be a value trap than a value opportunity.

Timothy Green has no position in any stocks mentioned. The Motley Fool has the following options: short October 2016 $28 puts on GameStop. Try any of our Foolish newsletter services free for 30 days. We Fools may not all hold the same opinions, but we all believe that considering a diverse range of insights makes us better investors. The Motley Fool has a disclosure policy.