The 160-year-old food giant is facing headwinds on several fronts. Can it regroup and continue to thrive? 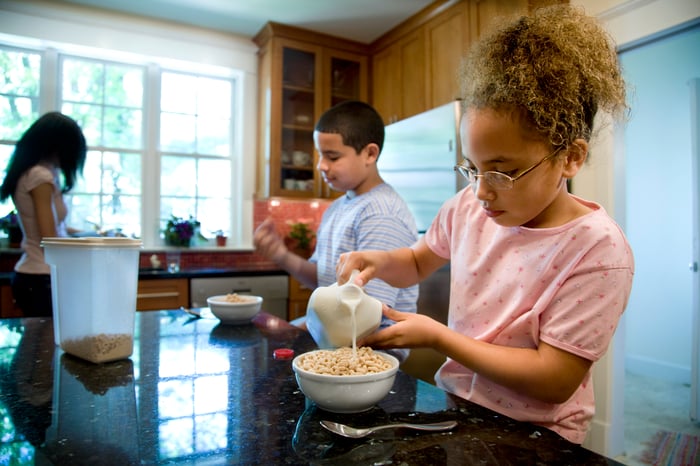 It's tough out there for food companies these days. Consumers are ditching brands that have been staples over generations in favor of organic and natural foods. Skepticism regarding Big Food has ballooned among millennials, with many eschewing the grocery store for non-traditional food sources, including farmers markets, community-supported agriculture, and home-delivered meal kits.

And on top of all that, food deflation is pinching margins across the industry as prices for staples like beef and eggs have fallen sharply.

General Mills (GIS -0.66%) investors were reminded of all that last week when the Cheerios-maker reported first quarter earnings. Revenue dropped 7%, with organic sales down 4%. The company's top line has now shrunk in 10 of the last 11 quarters.

The results were similarly discouraging further down the income statement. Gross margin fell 60 basis points; operating profits were down 6%, and earnings per share dropped 3%, or 1% after adjustments. Most concerning, perhaps, was a 12% volume drop in the U.S., though that was partly due to the sale of Green Giant to B&G Foods. Without it volume was down 7%, and sales slipped 5%.

CEO Ken Powell acknowledged that "net sales performance did not meet our expectations due to a challenging macro environment, a difficult year-over-year comparison, and a slower start to the year on certain businesses."

General Mills faces many of the same challenges that peers like Kellogg, Campbell Soup and other legacy food-makers are up against, but the company has been proactive. In 2014, it spent $820 million to acquire Annie's, the upstart organic food brand best known for its bunny-shaped mac-and-cheese. Since its acquisition, the corporate parent has expanded the brand into product lines such as organic yogurt with the help of General Mills' Yoplait division and organic soups for children, working with its Progresso brand. In 2015, Annie's increased sales by 9.4%, a respectable clip but not enough to move the needle for a giant company like General Mills. And competition may make it tougher for the brand to grow, as it gained just 0.34% in market share that year.

The decision last year to sell Green Giant and its sister Le Sueur for $765 million was for similar reasons as shoppers shift from the frozen and canned vegetables under the Green Giant label.

The company has also introduced its Consumer First turnaround, built on four tenets:

The company is focusing on five food categories: ready-to-eat, ice cream (with its Haagen-Dazs brand), yogurt, convenient meals, and snacks. Together, those categories had global retail sales last year of more than $500 billion, and are expected to grow at a compound rate in the low-to-mid single digits over the next five years. Nearly 75% of General Mills' sales comes from those five groups.

CEO Powell projected that the company's performance would improve over the remainder of the fiscal year as the Consumer First initiatives gain traction. For the full year, it expects organic net sales of flat to down 2%, constant-currency segment operating profit growth of 6%-8%, and constant-currency adjusted EPS growth of 6-8%.

Even those modest goals won't be easy to hit, as the company has seen sales at many of its core brands -- including Cheerios, Betty Crocker, Progresso, and Yoplait -- fade. In the most recent quarter, for instance, Yoplait Light sales fell nearly 30% as the onslaught of Greek yogurt brands like Chobani and Fage took market share from legacy brands.

After years of steady growth, the stock dropped sharply earlier this month when the company lowered its first-quarter guidance, and shares are down 10% over the last month. If management falls short of its guidance again, the stock could tumble.