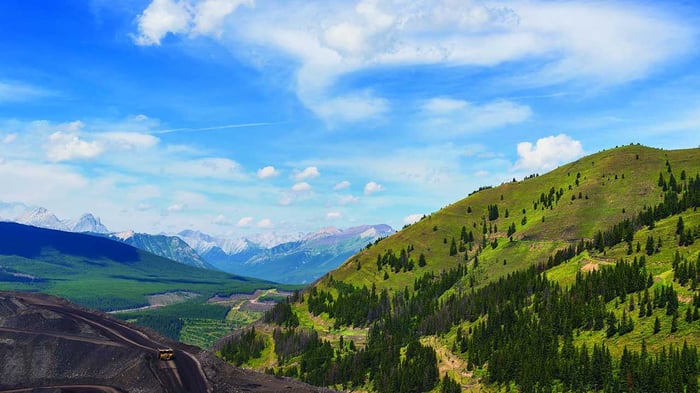 The stock market has done well over the past year, with most major market benchmarks producing returns in the 10% to 15% range since September 2015. The Dow and S&P 500 hit new record levels during the summer months, and although volatility has returned to the markets, investors seem reasonably comfortable with the prospects for stocks going forward. Yet even the solid returns from the overall market pale in comparison to what a few select stocks have managed to produce. Below, we'll take a closer look at three stocks that have tripled since this time last year to see if investors can squeeze any more gains out of them. 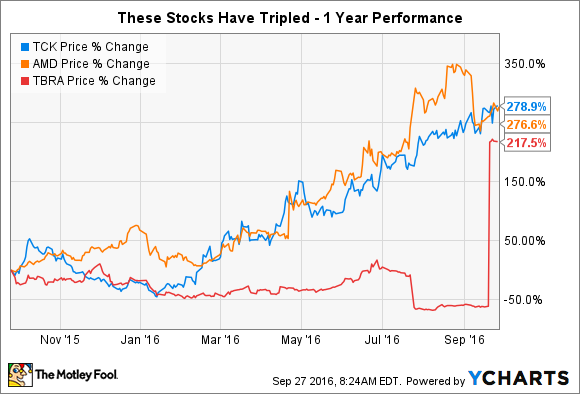 Teck Resources gets its momentum back

The commodities markets have finally started to move back in the right direction, and Teck Resources (NYSE:TECK) has been a primary beneficiary of that trend reversal. The company produces certain amounts of precious metals such as gold and silver, both of which have jumped sharply over the past year. Yet Teck is better known for its other mined products, including copper, zinc, molybdenum, and metallurgical coal. Better prospects for those markets have helped send Teck up 279% in the past 12 months.

The Canadian mining company has done a good job of cutting costs in its operations, working to make itself as efficient as possible to weather the downturn in commodity prices. Refinancing its debt allowed Teck to take advantage of low interest rates, buying itself a couple extra years to hope for a more extensive turn higher in sales. In addition, a new investment in an oil sands project could bring further diversification to Teck, and it could prove well-timed if oil can rebound from its recent slump. Overall, investors are hopeful that Teck has turned the corner, and continued favorable moves in commodities could send the stock still higher.

Will AMD serve up some tasty chips?

Semiconductor company Advanced Micro Devices (NASDAQ:AMD) has been extremely volatile in its history, producing lackluster long-term performance that reflects its secondary status in many of the markets that it addresses. Playing second fiddle to Intel in the PC chip space for decades, AMD has made more inroads in the graphics chip market -- but even there, it faces competitive challenges.

Over the past year, though, Advanced Micro has taken strides to become more competitive, and that has helped send its stock up 277% since September 2015. Its launch of its new Polaris graphics chip architecture has given AMD a viable position in the GPU space, and investors have increasingly high hopes that its pipeline of future chips using 14-nanometer transistor sizes can match up to those that its rivals produce. At the same time, AMD posted an adjusted operating profit in its most recent quarter, reaching what CEO Lisa Su called "a significant milestone" for the company. Takeover speculation has also pushed Advanced Micro shares higher. Overall, AMD's gains assume that the tech company will live up to its full potential, so anything short of that could cause shares to lose much of the ground they've gained.

Tobira gets a big buyout

The most common way for stocks to jump is through buyouts, and that's what Tobira Therapeutics (NASDAQ: TBRA) shareholders enjoyed recently. After suffering through a long period in which its stock price got cut in half, Tobira received a buyout offer from Allergan (NYSE:AGN) that sent the biotech up by more than 700% in a single day. That brought its overall 12-month return to 218%.

Tobira is looking at potential treatments for the liver disease non-alcoholic steatohepatitis, which Allergan has identified as an area of interest for the larger biotech company. Yet the failure of Tobira drug cenicriviroc to meet its primary endpoint in a phase 2 clinical trial during the summer led to a big loss for the stock, and few investors were confident that phase 3 trials of the drug would produce any better results. Allergan thought differently, though, and was willing to offer a combination of cash and contingent value rights that could be worth as much as $1.7 billion. Those rights could produce some additional return in the long run if the drug meets specified milestones, but Tobira has already generated most of the value it can for shareholders.

Stocks that triple are exceedingly rare, and often, what sends them to their new heights doesn't lend itself to repeating. Tobira has almost no chance of moving any higher than it currently is, but Teck has the better prospects to add to gains if its target market keeps behaving well in the months and years to come.