Call them what you want -- overvalued high-yield stocks or yield traps -- it's pretty much the same thing. It's a company that has seen its dividend yield get pushed to astronomical levels, but not for the reasons investors want. It probably means that there is something very wrong with the business and things are about to get worse from here. Three companies that stand out as high-yield stocks that appear to be headed for even lower stock prices ahead are Genesis Energy (NYSE:GEL), Kronos Worldwde (NYSE:KRO), and Midcoast Energy Partners (NYSE: MEP). Here's what makes these three high-yielders a quick way to lose money fast.

My MLP is over-leveraged and out of control

One of the biggest issues that can get any company in trouble quickly is when it takes on too much debt, but this seems to happen so frequently in the master limited partnership industry because they need to fund massive upfront costs for stable cash streams that can last decades. The trick is not taking on too much such that your current earnings power can actually handle it. This is where Genesis Energy seems to be heading. To make things worse, though, is that the way it reports its earnings makes the situation not sound as bad as it is.

If you were to read a Genesis investor relations presentation, the company gives a pro forma net debt to adjusted EBITDA ratio of 4.76 times. This isn't a fantastic debt load for an MLP, but it isn't bad, either. When you look at the details of where they got that number, though, things get a little shaky. The first thing that pops out are the words "pro forma" and "adjusted." The pro forma part of that accounts for a major share issuance that the company did in July, so the company deducted all of that amount from its debt load even though it specifically said at the time of the issuance that only part of it would be used in debt reduction. Then there is the adjusted part that strips out a bunch of one time items.

If a company's results struggle for a year because of low commodity prices, investors can forgive them and see what happens in the coming years. If that trend lasts for three years or more, though, then investors should probably start asking some deeper questions. This is the case for Kronos right now. Titanium dioxide, a rather ubiquitous chemical used in dyes, solvents, and a long list of other products, have been declining for several years and it has taken a toll on Kronos' bottom line. 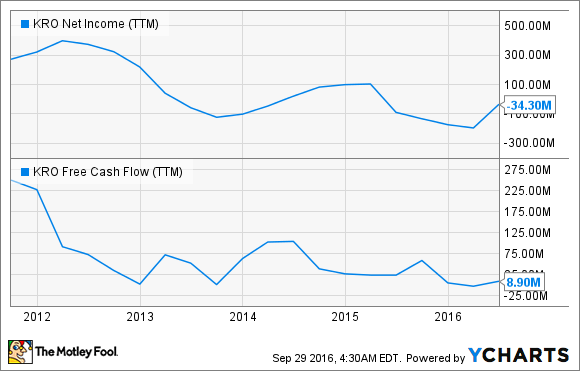 With net income and free cash flow levels this low, it's going to be incredibly difficult to maintain its $69 million in annual dividend payments, and in the past couple quarters it has needed to tap the debt markets to cover the difference. This is something that can't go on for much longer. Unless we see a rapid change in titanium dioxide prices for the better -- as of right now, there isn't much reason to think so -- then chances are Kronos will have to wave goodbye to its 7.1% dividend yield.

Unloved by its parent should say something

The most telling thing that investors need to know about Midcoast Energy Partners is that its parent organization, Enbridge Energy Partners (NYSE:EEP), said during its last conference call that it was pursuing a "strategic evaluation" of its investment in the company. Normally, that is c-suite speak for "this business has not met our expectations and we are looking to get rid of it somehow."

One of the reasons that Midcoast hasn't met expectations is that the company's largest business, natural gas gathering and processing, is one of the riskier investments in the energy infrastructure and logistics business. That's because they have direct exposure to production in a particular geographic region. If production volumes in a region decrease, gathering and processing assets suffer much more than long haul pipelines or distribution infrastructure designed to deliver to consumers. This has been the case for Midcoast, as it has seen gathering volumes decline 17% in the past two years. The company's cash flows have become strained by this such that Enbridge Energy Partners has stopped collecting its management fees to ensure that Midcoast can meet its payout to shareholders. This all seems to suggest some big changes that will likely involve a cut to the payout. If that were to happen, then today's stock price might still be too high.