J.D. Power has released its first ever study that measures customer satisfaction in the music streaming market, and Apple's (NASDAQ:AAPL) Apple Music service came out on top. Apple often notes that customer satisfaction is possibly the most important metric that it cares about, since high satisfaction levels translate into higher usage as well as ongoing upgrades for recurring revenue.

The study looked at several different categories of listeners, including highly engaged listeners and passive listeners, but overall satisfaction was affected by several other factors as well. It's critical for a service to work on a wide range of devices, and social features are also quite important for listeners to share music with friends and family. Exclusive content also helps win people over. 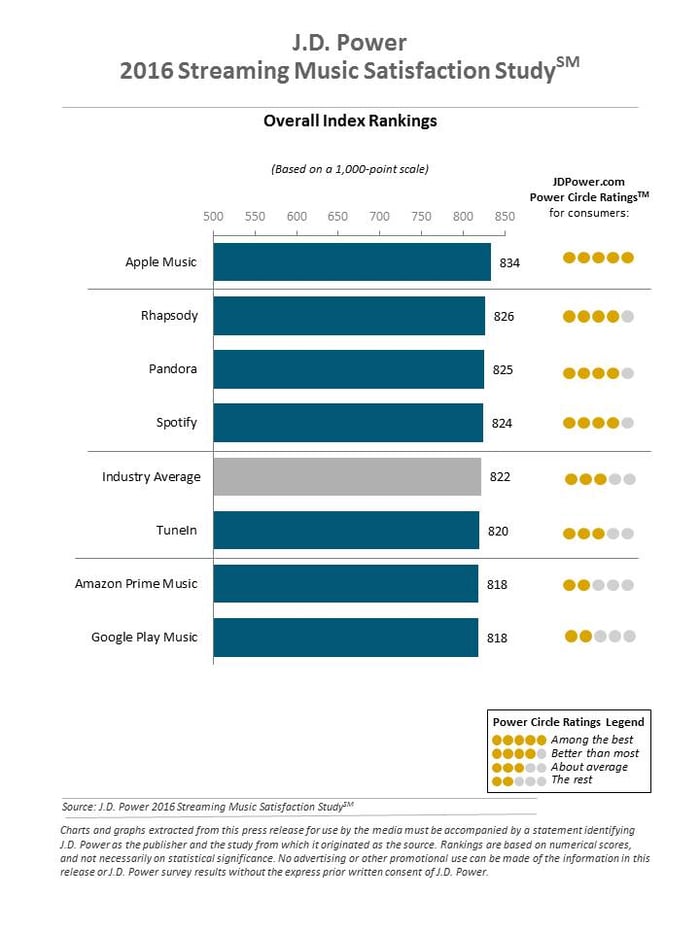 J.D. Power also said that Apple Music users felt most committed to the service, due largely to the deep integration across all of their devices.

Interestingly, J.D. Power notes that using peripheral devices to enhance listening translates into significant improvements in satisfaction. The most meaningful of these devices are smartwatches, so Apple Watch's music functions helped earn Apple some more points there. Being able to access the service on a Bluetooth speaker also helps, although Apple Music is not integrated directly with any Bluetooth speakers (yet).

Pandora and Spotify scored comparably, just a point apart, while Amazon.com Prime Music and Google Play Music fared poorly. The e-commerce and search giants have never really tried that hard to make an impact on the music streaming market, and their respective offerings are mostly "me, too" services.

It only gets better from here

The results of this poll were based on surveying nearly 4,500 customers during June and July of this year. Apple Music has just received a completely redesigned interface that's meant to improve usability and make the interface more intuitive, a justified complaint of the original version. The new interface was unveiled at the company's WWDC developer conference in June, but was not broadly available until earlier this month when iOS 10 rolled out.

Since Apple only offers a paid tier (a strategic decision that is helping to resurrect the music industry), which J.D. Power notes enjoys higher satisfaction levels, Apple will on average have better satisfaction than rivals that offer free tiers. Apple Music has been out for just over a year, and the company will continue bolstering the service as one of its most important services. At 17 million paid subscribers paying $10 per month, this is now a $2-billion-per-year business.