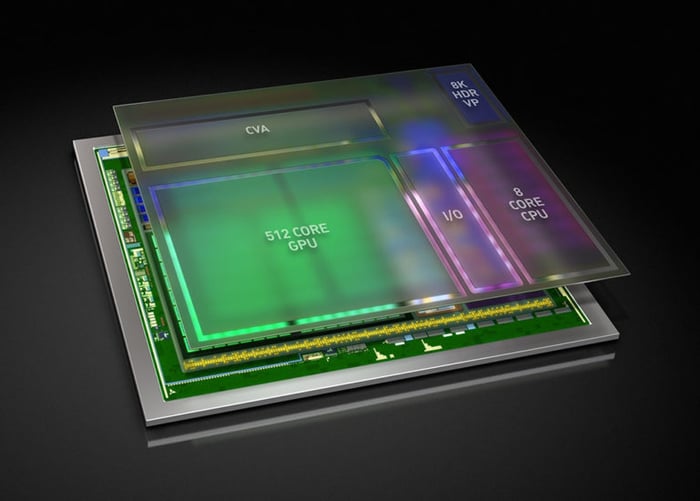 NVIDIA (NASDAQ:NVDA) has been working with automakers and auto suppliers for years by integrating its graphics processing units (GPUs) into new automotive technologies. But more recently, NVIDIA has increased its focus on driverless-car technology, and this week it took more steps in that direction.

NVIDIA announced a new mapping partnership with TomTom at its European GPU Technology Conference, which will make driverless-car mapping more readily available. Additionally, the company debuted a new artificial intelligence supercomputer chip that will act as the brains behind its driverless-car platform.

Mapping out the driverless-car future

One of the most important technical functions of a driverless car is for it to know where it is and where it's going. To help address this need, NVIDIA announced at the conference, it's partnering with TomTom to develop a cloud-to-car HD mapping solution.

The collaboration essentially takes NVIDIA's current Drive PX computing platform and merges it with TomTom's nearly 74,000 miles of HD maps. NVIDIA said the collaboration will "accelerate support for real-time in-vehicle localization and mapping for driving on the highway."

The system will be available through NVIDIA's DriveWorks software development kit, which means that any automaker or Tier 1 supplier that's working on autonomous cars will have access to it.

While it may seem like maps are a rather trivial feature that has already been conquered by services like Google Maps, continuously updated and crowd-sourced mapping is critical for driverless cars. ABI Research, a technology market analysis company, said about driverless-car maps earlier this year, "Maps will need to be updated continuously with real-time information about traffic, roadworks, and any other relevant information needed for anticipating and planning the path ahead and emulate human driving."

Both TomTom and NVIDIA believe that opening up the mapping software to other companies will bring about better mapping services and a faster commercial rollout of self-driving vehicles.

The most important news about driverless-car technology to come out of the conference was certainly NVIDIA's new artificial intelligence supercomputer, called Xavier.

All of this tech combines to deliver 20 trillion operations per second of performance and consumes just 20 watts of power (one-quarter the power consumption of Drive PX 2), according to the company. NVIDIA also said that just one Xavier SoC can replace a "Drive PX 2 configured with dual mobile SoCs and dual discrete GPUs."

Xavier will be paired with new computer vision hardware that includes two 8K video processors and its new computer vision accelerator. The company didn't give a lot of details on all this, but its current computer vision system gives driverless cars situational awareness through artificial intelligence, helping them to understand the images they're processing.

Xavier will be available for sampling to automakers and suppliers in the fourth quarter of next year.

Why all this matters

NVIDIA is continually moving further into the driverless-car market with its technologies and partnerships. The market for self-driving cars will be worth an estimated $42 billion by 2025, according to Boston Consulting Group, and NVIDIA is already well-positioned to benefit.

The new partnership with TomTom and the new Xavier SoC are steps toward the company's driverless-car future, but it may take a while for investors to see the payoffs. Xavier isn't sampling until next year, which means revenue from orders isn't likely to show up until sometime in 2018. Despite the wait, there's no doubt NVIDIA is setting itself up to benefit from the shift from traditional vehicles to self-driving ones.